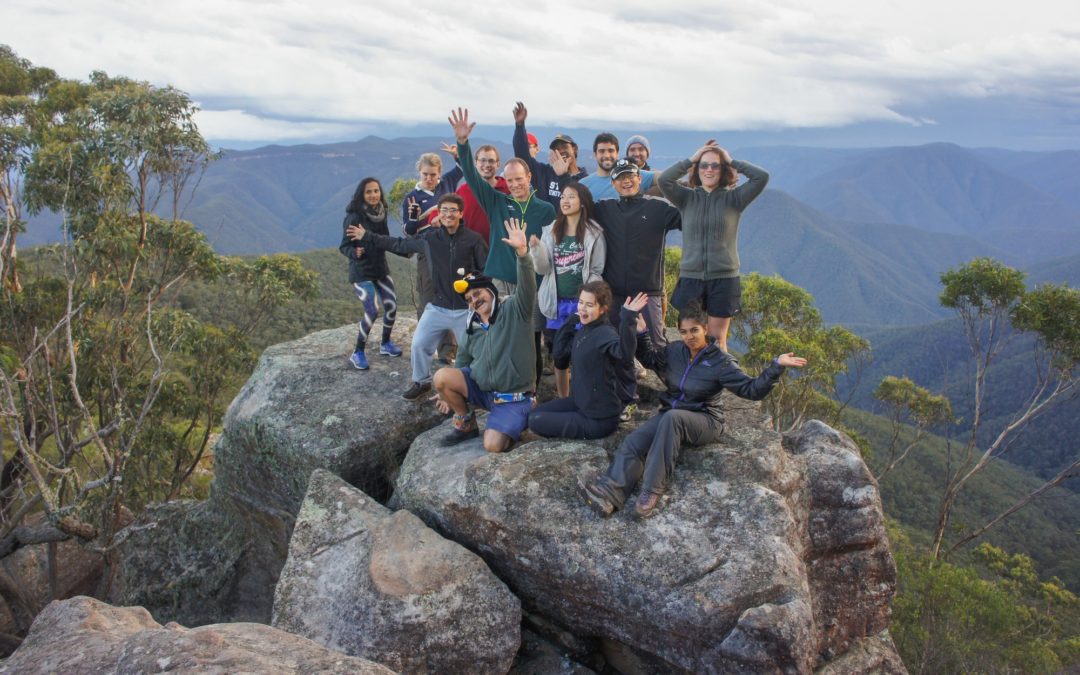 After a week of intense rain and closures in Glenbrook due to the flooding of the causeway, the initially planned route down to Erskine Creek had to be changed. And so the 11 km walk over two days was changed to a 26 km return walk to Splendour Rock.

In total, we were a party of 18 – with some of us deciding to catch the train on Friday night and stay at Ashley’s new place in Leura, and others arriving at Blackheath the next morning. After everyone had arrived on Saturday morning, we drove along Megalong Valley Road to the Dunphys camping area. The car park there was surprisingly full, possibly because of the annual Anzac day dawn service that happens at the Bushwalkers War Memorial at Splendour Rock. The sun was shining and everyone was eager to begin. The time was 9.30 am and so began the 2015 Freshers walk. The very initial part of the walk along the fire trail was steep, and some freshers were worried that it was going to be like that for most of the trip. Luckily, the trail flattened soon enough. After 8.5 km and many interesting conversations later, we reached Medlow Gap where we had a break. The sun was still out in full force! We continued our walk shortly after and our route, navigated by Ashley, deviated from the fire trail. Given the recent rains, a muddy route was inevitable. We had lunch near Kennel Flat, during which Tim, Clara and Ray were greeted by leeches. This prompted a wave of insect repellent application, with some of us analyzing the effects of 80% DEET in Bushman insect repellent. The sun was starting to recede behind some angry looking clouds by the time we were ready to continue our walk. Rain jackets came on as a light drizzle threatened us, and we trudged on along a very muddy route. By the time we got to Mobbs Swamp, the sun was back out. We soon got to the last creek which Ashley informed was the last place we could get water, and so everyone refilled their water bottles (even Johannes, who was resistant to drinking untreated water).

A short walk later, we began the steep uphill journey. There were groans, moans, water breaks, some scrambling and passing of bags, so the great views when we reached the top were well deserved. Many photos were taken and a quick walk later, we had arrived at Splendour Rock. The camping spots closest to the rock were occupied by some other parties, so we camped a bit further back. There was enough space and a nice spot for a campfire.
After everyone had set up their tents and gathered enough wood for the campfire later on, we made our way down to the rock. On the way, we ran into Sierra, our lovely gear officer, who had come up as well! The views from the Rock were awesome and we could see gray stormy clouds and lightening in the horizon on our right, and light and Lake Burragorang on our left. The sunset was clouded by the storm moving in.

With the light slowly receding, we made our way back to the campsite. Ashley started a fire and we all sat around. There was variety in everyone’s food choices. Johannes for one had carried half a kilo of cheese to have with his pasta, bread and everything else! For the Brasilian boys Eduardo and Orlando it was all about tuna. And then Tim had beef. For dessert the marshmallows came out. Dinner merrily continued amidst the claps of thunder, flashes of lightening and threats of rain. Most of us pressed on regardless, pretending not to hear it, and instead telling tales. The fun was soon to come to an end – Natalie noticed a change in direction of the wind, and there it was – the loudest clap of thunder yet which made everybody jump out of their pants! We were all reeling from the excitement when down came the hail! There was no ignoring it and everyone scattered back to their tents like rabbits! The hail continued for about 10 minutes, after which the entire area looked like it was covered in snow. It had also suddenly gotten very chilly and one could see one’s breath. Tristan had to bunk with Johannes for the night as the hail had made his small tent unlivable. A light drizzle followed the hail which fooled us and Ashley made another fire. However, it was short lived – the drizzle turned into a constant rain, which meant that however unwillingly, it was finally time to retire for the night.

The next morning, some had risen nice and early to watch the sunrise. The weather had improved and it was only overcast when we packed up and left the campsite after breakfast. Instead of descending back to Mobbs Swamp, we chose to stay high and head back via Mt Warrigal. There were some tricky sections, and one part where some solid team work saw us passing packs in a line. Happy go-lucky Tristan called out ‘Polo’ many times that it quickly became funny! We made good time and had a short break at Medlow Gap, and lunch shortly after. The walk back from there was relaxing with interesting banter and we got back to the cars in the late afternoon.

Overall, it was a great trip with an awesome group, and many freshers said that they were quite keen to get back into the bush again! Success!