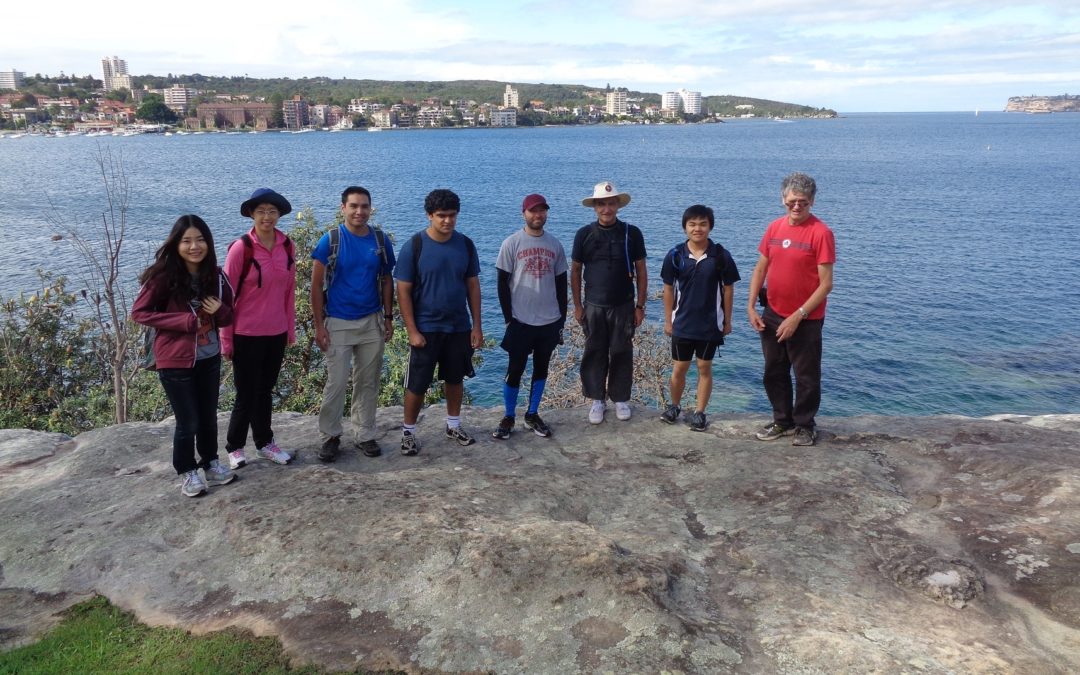 Another very lucky break with the weather; just one day later and we would have been lashed with rain and strong winds. As it turned out we had an overcast but rainless walk.

Eight of us met up at Circular Quay for the Manly Ferry, and sat out on the rear deck and took in the Harbour views along the way. At Manly Wharf some of us bought lunch as well as Ice Cream, and met John there who had already walked there from The Spit. We then set off for Forty baskets Beach along mainly footpaths and streets, until reaching the footbridge at North Harbour Reserve, Balgowlah. (As it was high tide there it was not possible to cross the mud flats there).

After Forty Baskets Beach it was suddenly on to rock-hopping along the shore, until reaching the tracks which pass over Dobroyd Head. Along the way we came to the side branch track to Crater Cove, which someone had tried to hide by piling some brush at its entrance. This is a fairly rough bush track which eventually ends at depression Era shacks at Crater Cove, used by people during the 1930’s and also by artists. One thing that was noticed was that there were only a couple of Dragons there as opposed to lots that can be seen in warmer months. After a break at Crater Cove, we returned by the same track back to the main Manly-Spit track, and continued along to reach Castle Rock Beach. Along the way there were just a few spots of rain, but the radar showed the main rain band passing over the Western Suburbs, so we took a chance on a lunch break at Castle Rock Beach. The Rock itself has a knotted rope attached to a spike at the top, intended apparently as an unofficial climbing aid, and didn’t look too safe, but it took my weight and also Jason and John.

We entertained a couple of seagulls during lunch, and then continued on to Clontarf. Here there is a sewerage pumping station cleverly disguised asan ancient Egyptian monument (as there also is on The Spit side across the water – see photos). Philippa thought that the coffee at Balmoral was better, so apart from a loo stop and water bottle refill, we didn’t stop there but continued to The Spit Bridge, partially along the old Manly tramway.

We crossed Spit Bridge and continued along the waterfront to the second “ancient Egyptian monument” (sewerage pumping station), and then down to an unnamed beach at Shell Cove. We arrived right on time at low tide, as planned. This strand of sand is only uncovered at a low tide, and today it was a very low tide. At other times a street bash and a fairly steep climb along Parriwi Road is necessary. We walked along the sand and did some rock hopping on rocks covered with sharp oyster shells, so care was needed. At last we got to Chinaman’s Beach, which because of the cool weather, we had almost to ourselves. Here John left us to return to his car at the Spit. The rest opf us did the road bash to Balmoral Beach, with the last bit via a rough bush track.
At Balmoral we had coffee at the little cafe beside the pavilion, and Philippa then left us to get a bus from there.

Then it was up the hill via Laurie Plunkett reserve which is actually the old right of way of the Balmoral tramline. This adds a bit to the walk’s distance (not being on the “official” Harbourside track), but is much easily graded, being of course meant for trams to get up the hill. Then it was across Middle Head Road and into the Army barracks of Middle Head (now part of the National Park) and then along another rough track to Chowder Bay, which is still a Navy establishment. From Chowder bay the track continued to Bradley’s Head where the mast of the first HMAS Sydney is preserved. After a short break we continued down to the ferry wharf at Taronga (Athol Wharf), where on approach we found the ferry already docked, so we ran down to the wharf to just make it in time. Then it was the ride back to Circular Quay. We had covered 20 kms on this walk. At the Quay we all went our separate ways. Everyone seemed to enjoy themselves despite the length of the walk. Maybe a few sore legs the next day!

I regretfully need to mention that we had one “no show” and also someone who emailed me at 9.35pm the previous night to say he had “something else to do”. Although we didn’t have a wait list this time, it is leaving it a bit late to pull out, and I would regard that as a virtual “no show”. (One person pulled out two days earlier to attend the support rally for refugees on the Sunday, which was called at fairly short notice; this was in a good cause and acceptable).