Camping, Bushwalking and Canyoning at Newnes 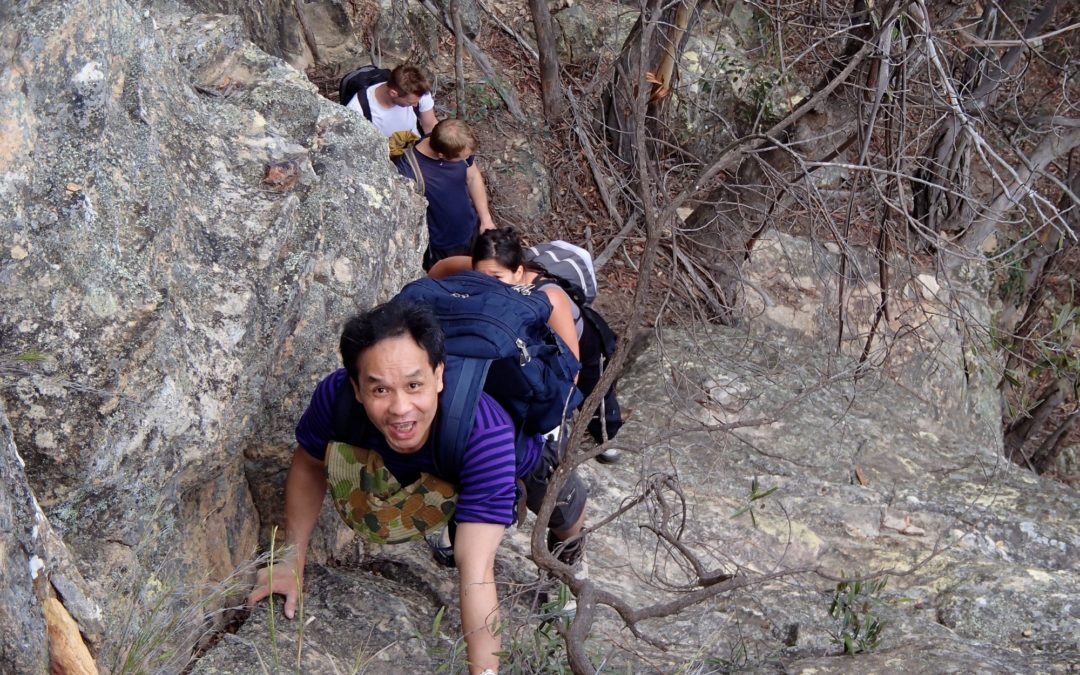 We left Sydney Uni at 1.30 on Friday. Heavy traffic and finding somewhere to refill a gas bottle in the mountains meant we arrived at 4.30, setting up camp along the river opposite the old Newnes Hotel. The pub looks much as it did when it served its last drinks sixty years back, with the front bar now serving as the camp office and kiosk. We camped here, rather than the spectacular NPWS campsite a little further on, to take advantage of the bathroom block and hot showers. The outdoor pizza oven described on the Newnes website is also a magnificent construction and makes it very tempting to organise pizza night on the next visit! By the time the sun went down at 6.00 we had the tents up and a roaring fire going. After dinner we settled down around the fire for red wine and chocolate, both of which were in plentiful supply.

Next morning we had a leisurely start, perhaps due to the amount of red wine, and started up Donkey Mountain at about 9.30. We parked at the stile and NPWS sign and headed straight up, hitting the cliffs just below The Columns, from where we walked and scrambled north east arriving at the saddle just north of The Columns which is the lowest point of the mountain . This took us a bit over an hour. From here we continued north east along the top of the mountain. It took us some time to get a sense of the scale of the sketch maps, and we were only really certain of our location when we got into Donkey Canyon, having enjoyed various pinnacles and lookouts along the way. At the end of Donkey Canyon we scrambled across into what we took to be the end of Titanic Canyon, and eventually into the unmistakable Grand Hall. It is a truly great spot – the perfect bushrangers lair. It really feels like a big stone hall. The floor is perfectly level, dry leaf-litter and there is even a massive natural rock fireplace resembling the hearth in a medieval castle. We climbed the crack into Two-Storey Cave and from there popped out into Freeway where we met two bushwalkers from Orange who had been unable to find their way into the Grand Hall from the other end. Scrambling back down into the Grand Hall we proceeded along the narrow passage to Grand Entrance, where we met the people from Orange again and had lunch on top of Mossy Rocks.

After lunch we went looking for the Green Room. Once again, we did not find the sketch maps particularly easy to follow. When we got nearly to the end of the mountain we were able to identify some obvious features, especially Jenny Craig, a crack running for perhaps 30m between two sections of the mountain that you can get through but only sideways and, in my case, by holding my belly in. Tony was captivated by Jenny Craig and went back and forth several times. From this landmark we worked our way back to the Green Room. This is another beautiful stone ‘room’ with the kinds of vegetation you usually only find in a deep, wet gully. The scramble out at the top end of the Green Room is quite demanding and only Tony climbed it, as we had decided it was time to head back by a route we knew. A close encounter with a snake in the narrow passage to Tchaikovsky Ledge put an end to my appetite for adventure that day (white as a sheet, I am told) so we headed straight back to Grand Entrance and straight down the steep gully to the road. Walking back along the road to the car was a good chance to look up at the mountain and identity the features we had seen from close up. A great day, and Donkey Mountain richly deserves its reputation.

We were back in camp about 4.30 and having the luxury of hot showers when Marty and Tristan arrived for another nice evening of fire and red wine. An early wombat out before sunset gave Gaelle the chance to take photos and films – it was the first time she had seen one. The weather was perfect, with dry, wombat-grazed grass to lie on around the fire and the cloudless sky and zero light pollution revealing the full glory of the milky way.

The next morning we were a little less dilatory, heading down the river to the Pipeline Track at 8.00. An hours hard climb brought us out on the Wolgan Valley lookout, where we rested and took photos – the sun was out and the views simply magnificent. From here we walked on to the saddle and turned off for Starlight Canyon, enjoying views of the Capertee Valley on the other side and the mountains in the Wollemi beyond. The track notes say that the track peters out in the saddle before Starlight, but these days it is well-defined considerably further and we decided to follow it, despite the fact that we were heading beyond the indicated point to head down into the creek. We saw a couple of cairns that might mark the turn-off, but no clearly defined side track. Maybe we missed it. In any case, the main track ended on a rock formation above Starlight where a cairn seemed to indicate crossing and continuing. The GPS indicated we were no more than 200m from the usual entry to the canyon, so we decided to carry on down. At the bottom of the rocks we picked up a fainter but still convincing track, and shortly after we arrived at the top of a 15m abseil with an anchor in place. We seemed very high above the creek given that the track notes describe only one 15m abseil before the abseil into the tunnel section of the canyon.

Shortly after this abseil there was another, so we know we were not on the usual route. As it turned out we were on a route seemingly designed for when the tunnel is blocked by debris and can only be accessed from bottom. It was a fun route – five abseils of roughly 15, 15, 20, 8 and 8 metres, all with straightforward starts and with minimal horizontal walking between them. The last two could easily be combined, but the pulldown would be difficult. The final short abseil drops into Starlight right at the exit from the tunnel section. So we reversed up the tunnel to the normal abseil entry. It was an ideal time to visit, as it was almost dry and there were only a couple of small piles of timber debris to negotiate. For almost all the way it was a smooth, sandy path, allowing us to walk with just a couple of dim redlights for the whole group and appreciate the glowworms.

This was my first visit to Starlight and it completely exceeded my already high expectations. What a place! The tunnel is a great rift in the rock, one to two metres wide in most places and in places as much as twenty metres high. The water-sculpted walls get closer together as they rise up and are covered in glowworms, forming great sweeps of ‘stars’ resembling the perfect night sky we had enjoyed the night before.  It seems to go on for ever, and is in fact 300 metres long.

After a slow walk up and down the tunnel we started down the canyon. Once again, it exceeded  expectations, being significantly longer and more canyon-like than I expected. There is a substantial section of beautiful, sculpted constriction, followed by a much longer section of gorge with excellent, clean cliff faces on both side of perhaps 80 meters in many places. This section felt a bit like Thunder Gorge. At the end there is a 15m abseil down an exceedingly pretty waterfall, or a shorter, dry abseil on the right. As it was now nearly 4.00 we got the spare rope out and set up both abseils to speed things up.

We then tried to boulder scramble down the creek, which is a steep chaos of huge blocks. This was lots of fun, but quite demanding and very slow, so after a bit we climbed up on one side, as recommended in the notes. This got us pretty quickly to the Wolgan River and the 6km walk down the firetrail on the far side. We ran out of light after a couple of kilometres and did the last bit with head torches, arriving back at camp at 7.00. With a big party, a couple of inexperienced people, and all the abseils in the route we used it had taken us eleven hours. A tired dinner in Katoomba and most of us were back in Sydney by midnight. Tony and Tristan, however, had not had enough adventure for the day and caught a train on which someone very tragically died, so that it was very late indeed before the emergency services had done their work and Cityrail managed to get people back to Sydney via alternative transport.