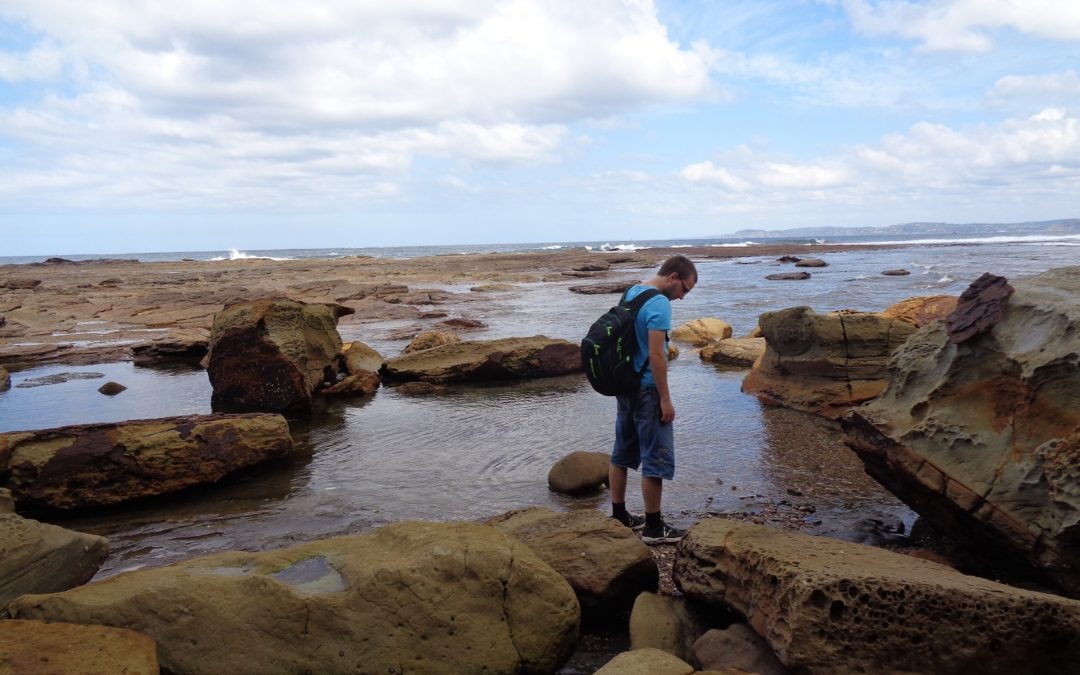 The walk plan didn’t get off to a good start, with the possibility of showers forecast earlier, and also my home internet losing its connection twice (found to be due to a jumper cable link pulled by possums!) causing difficulty in contacting walkers (and prospective walkers). Then the lack of a second car caused me to consider the fall back of a taxi to Kilcare for any “overflow”.

As it turned out however, things didn’t turn out too bad. The group was reduced to 5 so all could fit in my car. The weather was good also – mostly sunny with occasional clouds and not too hot.

So five of us met up at Woy Woy Station, and set off in my car for the 15 minute to Kilcare Beach. Having only one car, a change of plan was required; instead of walking one way from MacMasters to Kilcare, I decided on a partial loop from Kilcare to Maitland Bay, then to Mt Bouddi, then via Strom’s Trail to the NPWS shp at Maitland Bay, and then back to Kilcare. This minimised the amount of both-ways walking we did on the same track.

We walked along the track to Bullimah Beach, then along the main track to Maitland Bay. At one point we passed through lots of Burrawang plants, which although looking like palms are actually Cycads, having survived virtually unchanged since the Permian period 250 million years ago. (Warning – the seeds are highly toxic). We reached the track coming down from the NPWS shop and turned right and eventually reached Maitland Bay where we had lunch. Then we walked around the rocks, by the remains of the S.S. Maitland wrecked there in 1898. Johannes was interested in the rock pools, and Thushan the rock formations. The girls took selfies near the water’s edge, with one eye looking out for the waves! (this coast is notorious for freak waves washing people off rock platforms into the water).

Thenm we returned at headed north from Maitland Bay. Instead of the right hand track to Little Beach, as per normal, we took the left track to Mt Bouddi, which goes up another of those never-ending steps. After a short break atb the Mt Bouddi car park, we did a short 700 metres road bash to the start of Strom’s Trail (also called Strom’s fire trail).

This trail is little known and used – we only saw a couple of other walkers and two people on bicycles along the 2.5km track. It is through a lovely forested area (so “Strom’s” is an apt name – if you speak Czech!) with large Red and Blue gums, Cabbage tree palms, and even a Bangalow Palm (native but uncommon here). This track ends up at the NPWS info shop near Maitland Bay Drive, and from hwere we descended down the Maitland Bay track to the junction with the track to Bullimah. Then it was along that track (the only track duplication we did) back to Kilcare Beach. There we had a swim – well, Johannes, Thushan and I did, the girls decided to paddle but a few waves made them wet anyway. The water was quite warm, too.

After the swim, and coffee at the Kilcare Surf Club shop, we returned back to Woy Woy station and I dropped Johannes, Saw, Xaioying and Thushan off for their train home.

It turned out to be a good trip, despite the initial hiccups, in very good weather and along some different tracks than normal.