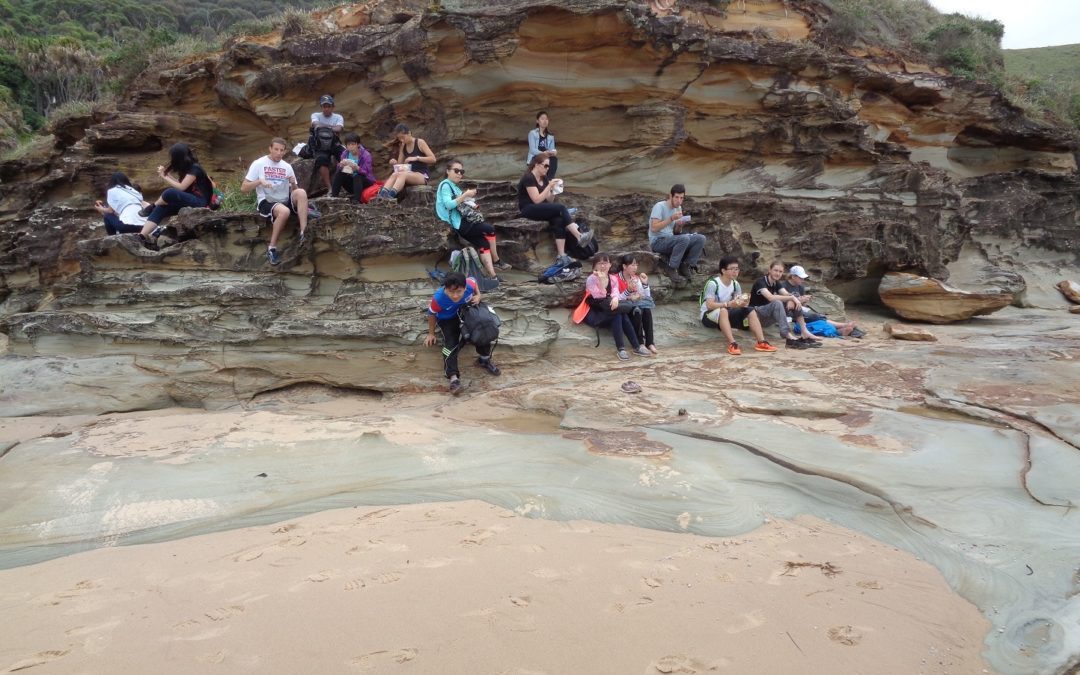 Although I had expected a few drop-out because of the weather outlook, in fact we only had two people withdraw due to weather and health concerns.

And indeed it did not look to be a promising day. Although there was a mere 2 or 3 spots of rain when I left home, by the time I was passing through West Ryde the rain had become heavy. Also the radar showed several rain bands passing through the Royal National Park at our destination!

Still 18 of us met up at Central Station for the 1 hour trip to Helensburgh. On arrival there some time was lost due to the station toilets being renovated, and only the disabled toilet being open.

Then it was off to Metropolitan Tunnel, about 400 metres down the street. This is the only Illawarra Tunnel with Glow worms, having never been used for Mushroom growing. (This was also the centenary of its closure to trains in 1915). The overcast but still warm weather promised a good show from the Glow worms, and before entering the tunnel I told everyone that they had to be quiet and no flash photos (as all they would get would be a brick wall). So we entered the tunnel, noting the little waterfall at the tunnel mouth from the morning’s rain. Yet, despite my request for quiet, one person just couldn’t resist making very loud moaning ghost noises as we went further inside the tunnel! What’s more, it gave a cue to several others to start chatting loudly. After couple of blunt requests for people to be quiet, they eventually fell silent. After a few minutes to adjust to the dark, Glow worms on the ceiling started to appear, and they made a reasonably good show. I suspect though that they could have been better if it had not been for the noise. After watching the Glow worms, we exited back the same way (the tunnel is not a through route), and on the way out noted some idiotic and offensive graffiti left on the wall just inside (it is edited out in the photo).

I made known my disappointment about the noise, but the person responsible didn’t own up, although I’m fairly sure of who it was.

After that, we set off along the local streets to the service road which eventually leads to a rough track beside the Helensburgh Tip, and then to the start of the Burgh Track. It was here were we got our only rain shower which lasted for about 5 minutes. This ran level for quite a while, then started to drop down into the valley of the Hacking River. Although usually paved with rough gravel, apparently it had been very recently graded it is a fire trail), so instead there were sections of smooth clay made quite slippery due to the earlier rain that morning.It required some care to navigate this section and indeed I myself did slip at one point, but with got away with nothing more than a bit of mud on my pack. Zeyu (dreamcatcher) however, tempted fate by rushing down one of these sections shouting “Acceleration!”. (I suspect he might have been shouting something else if he had fallen and did his ankle in!).

So we continued down, with the group spreading out a bit due to the slippery section, and we came to the junction of the fire trail with the Burgh path down to Hacking River. As it is marked with nothing more than an NPWS arrow, 5 people ahead overshot it and were called back. This is the “jungle” section with lots of Cabbage Tree palms, and also leeches. Before entering I advised everyone that it was leech territory. Still, one person stopped briefly to take a photo, and the leeches wasted no time advantage of the opportunity! “Look, they’ve even stopped for us”! At one point the track becomes rather vague, covered by falling leaves (and also because it is not used very much nowadays), but eventually we came to the Hacking River crossing.

Although the River was up a bit, it was still OK to cross on the stones, and we eventually all got across without too much drama.Then it was on to the edge of Sir Bertram Stevens Drive. And that’s where the fun with the leeches started. Several people found that they had acquired leeches, and stopped at the roadside to try to remove them by various methods including stamping their feet. I told them to keep moving as they would just get more on themselves. After initial reluctance they got moving across the road and started on the track up the hill to garawarra Farm.

(Why the edge of Sir Bertram Stevens Drive is a “hot-spot” for leeches is interesting. It is possible that it is because leeches are attracted to the CO2 and warmth given out by their prospective hosts, and the tarred road and passing vehicles provides both).

So we made our way up the hill which is a solid climb until reaching a small rock shelf which I knew was out of leech territory, before having a rest. There several people removed the leeches that had hitch-hiked on them (although in fact there were not a real lot – couldn’t convince the “hosts” of that though!).

Then it was to continue on along the Burgh track, which apparently doesn’t see a lot of use nowadays – it was also a link to the now-closed Lilyvale Station.

After a brief stop at the Garawara car park, it was then down the track to its junction with the Coast Track just above Burning Palms Beach. Everyone enjoyed the vista of the beach, ocean view and the Escarpment. They also enjoyed the warm humid air coming up from the beach, after the damp walk through the foest. Also, I came across a small flock of Quail in the Lomandra grass, which ran away at speed.

By the time we arrived at the beach it was already almost 1pm, so a decision was made not to do a forced march back to Otford Station for the 3.15pm train, but instead to have a leisurely lunch rest at the beach and then make the 5.15pm train.

By this time the sun had come out also.

At the beach various people took off their shows to remove a few more leeches. Curiously, I found that a pair of leeches had hitch-hiked on my volleys, but were unable to get past the tongue of the shoe, being tightly laced, and just sat there. They got off really quickly though when I rinsed the shoe in the sea water! Shows that Volleys may seem to have some protection against leech penetration.

After a lengthy rest at the beach, we then set off along the Coast Track, through Palm Jungle, along the new board walk put in to stop the major erosion being suffered due to the popularity of this track, and up the Escarpment back to Otford. This section is a solid climb up to the top, but is relieved by great lookouts. We reached Otford Lookout, and then the boring section along Sir Bertram Stevens Drive to the Otford Pie Shop, which we reached just before it closed. Some of had drinks, and a couple of people were “relieved” shall we say, to be able to use the toilets there!

Then it was down the track to the station, which is actually the steepest part of the whole walk.

It was a good walk, which tested some of our newcomers (and introduced them to leeches!).

BUT, the NEXT person who comes to Metropolitan Tunnel and makes ghost noises, will have a very short bushwalk – straight back to Helensburgh Station for the next train back to Sydney!
Just remember that when you join the Club, you agree to abide with the directions of the walks leaders.