An Urban Walk on Middle Harbour 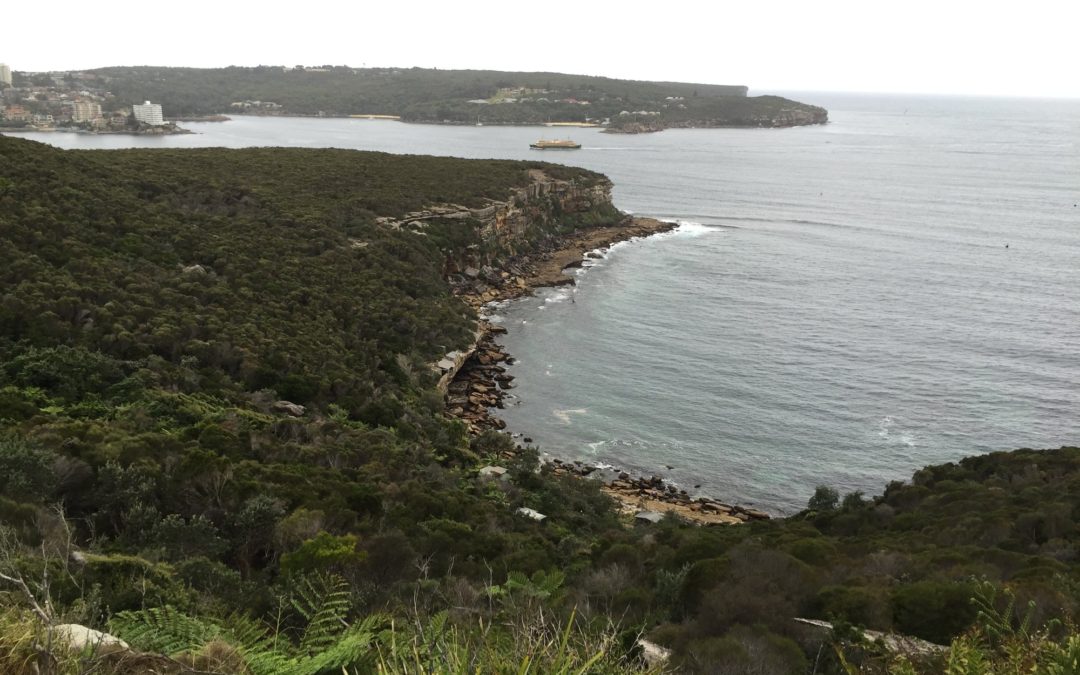 We met at 9.30 on a warm but overcast morning under the Roseville Bridge in Forestville. At that point 22 people were registered. Seven people texted to drop out and we had two no-shows (you know who you are!), so thirteen of us set off down middle harbour. The Harbour to Hawkesbury track runs through big gum trees under some very pretty sandstone cliffs, with views across to the harbourside suburb of Castlecrag designed by Walter and Marion Burleigh-Griffin, who also designed Canberra. Castlecrag is prettier. We took a short break at Flatrock beach, and were soon skirting the old explosives store in Bantry Bay.

The whole of Bantry Bay, and the western shore opposite the mouth of the bay, are unspoilt because houses were not allowed within line-of-sight of the explosives store. It is extraordinarily wild for somewhere in the middle of Sydney, and some sections are quite rough, and feel like a real bush track. We saw a Lyrebird near the Natural Bridge, where we also took lots of photos of ourselves on the bridge, and enjoyed the mild scrambling to get up to The Bluff, where we took a good break to enjoy the views right down the bay and back to the skyscrapers of the CBD. Two people had leeches in their socks, so we patched them up and took lots of photos of the leeches.

At 1.00 we emerged at Seaforth Oval, having covered exactly 10km according to the GPS. From there it was a 1.6km walk to Seaforth shops. On the way we saw our first Brush Turkey, sensibly keeping as far away from the bush as possible. After a great lunch at the Taste of Belgium café, whose cakes and gateaux must be tasted to be believed, five people caught a bus back to the city, leaving eight of us to complete the second half of the walk.

We shaved of a couple of kilometres by walking diagonally through the well-heeled streets of Clontarf to rejoin middle harbour at Clontarf reserve. From here it was the famous Spit to Manly walk, a pavement-quality track with spectacular views of Chinaman’s Beach, Balmoral Beach, the heads of Sydney harbour, the Manly ferries plowing back and forth, and finally, our longed-for destination, the Manly Wharf Hotel! On the way we visited a Brush Turkey mound I saw being built last spring, saw plenty of Eastern Water Dragons, and some of us got a good view of a Whipbird. Arriving at Manly Wharf a bit after 6.00 we found we had covered precisely 20km in the day – another strangely round number. Ingo kindly shouted champagne for the survivors before they caught the ferry home.

A great day out and I hope to see all of you on future trips!