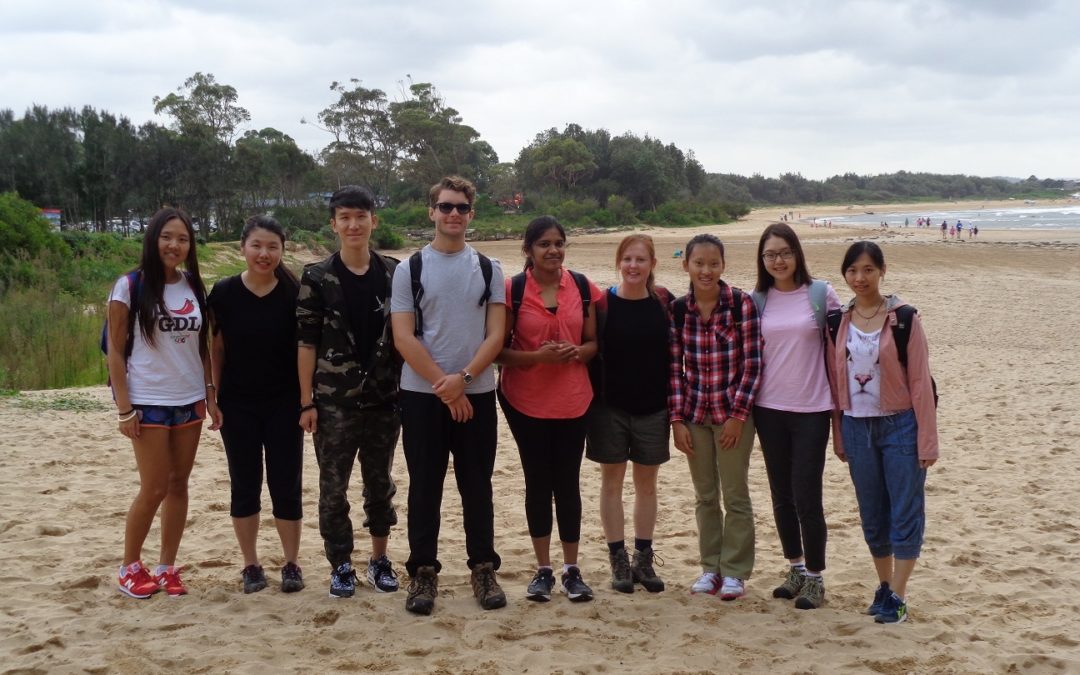 Although I woke to blue skies, the weather forecast looked a bit worrying, promising showers and maybe a storm. Despite that, 10 intrepid adventurers decided to take the chance with the weather. With the numbers reduced due to sickness, sleep-ins, missed train, and unfortunately one “no show”, 10 of us met up at Woy Woy Station, and we all bundled into David’s care and mine, eliminating the need for a bus trip.

So we set off for Umina Beach, only to find that hundreds of cars were parked in the car parks and surrounding streets due to a major Surf Carnival being held at the beach. So we drove to the south end of Umina Beach and managed to get the last two parking spots available. Then it was rock-hopping around the headland below Mt Ettalong, and noted the sunlight shining on Broken Bay but also the dark clouds over Palm Beach to the south. It was also a low tide, which helped. So we clambered up the rocks top the path below Mt Ettalong (which Gosford Council prefers people not to use, in case rocks fall on you), and straight into a strong wind and it started to rain. Rain covers came on and we continued down to the north end of Pearl Beach. Walkign along the sand the rain, which had briefly eased off, came back with a vengeance, big heavy drops driven by the wind.

By the time we reached the south end of Pearl Beach however, the rain had stopped. I tested the water and found it warmer than the air! (In fact it was 24 Deg C versus 23 Deg C air temp.). A check of the radar though warned of another rain band approaching so we made for the Crommelin Arboretum where there is shelter. At the Arboretum we were visited by a Magpie family who had an offspring who it appeared had outlived its welcome, as one of the parents pecked it mercilessly when it came to us begging for food. A Kookaburra also cam down to check us out. There were no Bush Turkeys – unusual – maybe they like us were sheltering from the rain. Another check of the radar (what would we do without it?) showed the rain easing off but another coming in 10 minutes. I figured that that would be just enough time to reach a cave/overhng on the Pearl Beach-Patonga fire trail, which was our next section. And it proved to be the case.

After waiting at said cave for the rain to pass, we then et out up along the fire trail, which is a steady grade up as far as Warrah Lookout and the junction of the Great North Walk (GNW). And the sun came out! At Warrah Lookout we had a short break for water, and admired the view which covers Barrenjoey, Palm Beach and the Hawkesbury Estuary. Our destination, Patonga, could be seen below us. Then it was along the GNW which levels off for a while before starting a steep descent to Patonga. Just as we were arriving at the shops the rain returned. We took some shelter in a pavilion where we saw some cricketers playing on regardless of the rain. Then it was off to the fish and chips cafe at which we didn’t have to wait long to order – well, fish and chips of course! The rain must have deterred many tourists so the shop was less crowded than usual. Another check of the radar showed that we could have a leisurely half hour for lunch before the current rain band blew over. Meanwhile we watched the local seabird life including some seagulls that managed to hover stationary by flying into the on-shore strong wind (see photo). Also, two Pelicans stood atop light fixtures which have little wire spikes on the arms (might just be able to see them in the photo) to stop the Pelicans sitting down on the lights, which covers the sensors and turns them on (the lights AND the Pelicans as it keeps them warm).

So we took off back along the GNW retracing our steps back to Pearl Beach.Of course this meant a steep climb back up to Warrah Lookout. Along the way we saw a male Lyrebird with a full tail cross the track, and as usual with these birds, were unable to get a good photo when it went into the undergrowth to scratch around. Remarkably on the level section of the GNW the sun was out and it became rather humid and very warm. After another stop at Warrah Lookout (this time at the section without a fence), we rejoined the fire trails for the decent down to Pearl Beach. At no time did the rain return. I had a paddle in the warm water, and then we set off along the Beach to the path under Mt Ettalong. Then down to some more rock hopping. Although the tide was coming in, it was deemed still safe to do the shoreline rock hopping and we ended back at Umina Beach and the cars. Then it was back to Woy Woy Station where we noted the 4pm train was already there – not much chance of getting it. Never mind, the next one was only 20 minutes later.

This was a nice walk admittedly in rather ordinary weather; still, walking that track in cooler weather is preferable to a slog along it in hot summer weather. It rewarded those who persevered despite the weather forecast. It was also one of those rare walks where it is possible to get a precooked hot meal at lunchtime! No waterspouts appeared despite it being the sort of weather which produces the. No snakes or leeches either (this walk almost never has the latter).