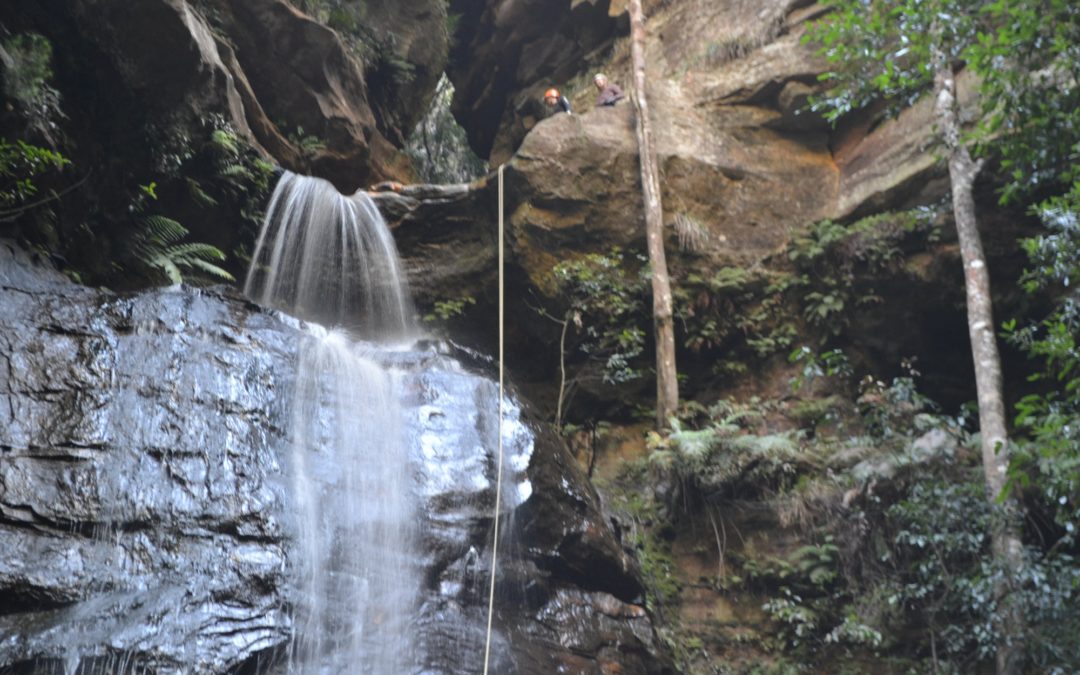 Expected to be cloudy for the whole day according to the weather forecast, again they successfully fail to predict the weather, it was a bit of shade very early in the morning, the sky clear out once we arrive at springwood.

As my aim was to organized a big beginner canyoning trip to let more firsttimers experience the charm of bluemountain exclusive features, it was pity that almost half group of people dropped out before the trip with whatever their reasons, 4 other members contacted me in the morning to quit because they missed the train. I personally felt a little bit disrespectful, although club trip doesn’t charge, the trip leaders are voluntarily to make a great effort preparing the trip and gears for the members by their own personal time, if you can’t go, please give them at least 3 days advance notice, it’s rude to cancel in the last second.

After meeting up at springwood station, we all headed to the yellow rock lookout to practice abseiling. Yellow rock I reckon should be our regular abseiling course location, it has fantastic view of Nepean River, different cliff rock formations including straight wall and overhang. After giving out a brief oral lesson of abseiling, I set up 2 ropes on a straight wall and overhang wall respectively for them to practice. Everyone was doing perfectly well, Venessa was a bit nervous while moving outward to the edge, kept looking down behind the cliff will only scared her even more, eventually she got the technique successfully passed the overhang task. Poor Udit fell upside down at the overhang that seriously freak him out, which directly cause him gave up to the canyoning trip in the afternoon.

Phil and Udit had to leave after mid-day since they were not intend to join the empress canyon, we split up at springwood carpark and headed to wentworth falls. The down side of empress canyon though is there were lots of commercial groups taking tourist across it, the very short 20mins lower canyon have to receive 11 commercial groups on one day!! We got to know that the last group were starting at 3pm, which means if we start walking in at 3 to the upper session that just make sense!

So we sat down near conservation hub had a lazy lunch, some of us decided to run down to empress fall to check out how exactly the last descend will be, Neetech decided not go after feeling the chilly water, his hand couldn’t even place in the water more than 10 seconds!! I feel so grateful that he carefully consider his own safety, it could be dangerous to scramble in the canyon if you lose too much body heat!

Finally we started off the Nature pass at 3 with group of totally 7 of us, followed the pass for about 20 minutes, until we saw the figure 8 pole then turned off from the track down through muddy swamp downhill and we arrived to the beginning of upper empress canyon.

This is such a good start off, the pristine water stream really amazed these first-time canyoners, yet it was really slippery on some of the rock surfaces, the team walked quite slowly and carefully, we were lucky enough to spot a baby yabby while Sierra talking about not disturbing them if we spotted them, perfect for showing to our overseas friends.

After a few jumps and scrambles, including the first hand line descend (proud of Venessa, at the beginning of abseiling session she’s quite nervous of height, but did a great job of scrambling between rocks jumping down waterfalls), we reach to the end of the upper session which the compulsory 4 meters slide/jump waterfall, everyone were so excited screaming yelling all over, had such a great time.

Before access to the lower session of the canyon we had to fill up the log book, checked out there were 11 commercial groups been in on that day! Average 10 persons per group which means from 9am to 3pm already had over 100 people went pass the same stream, amazing, but bit worry about the over usage of the canyon.  Lower session is pretty short, there is only one jump and 20 mins later we arrive to the empress fall ready for the last 30 meter abseil.

Tony was down first, by his really high tech yet bit complicated descender, really appreciate though he has been helping the group a lot on the day, always taking extra care to the people, and help out belaying all the time. Once he got down onto the belaying position, we started to send Isaac and Johannes down as they only worn thermos tops pathetically shaking at the wind tunnel. Johannes took extra-long time at the abseil heard he got stuck at the middle by the twisted rope, everyone else were just fine.

Packed ourselves up below the falls, finished our one wonderful day!

Now we officially have few more new canyoners in the club!! Congrats!!