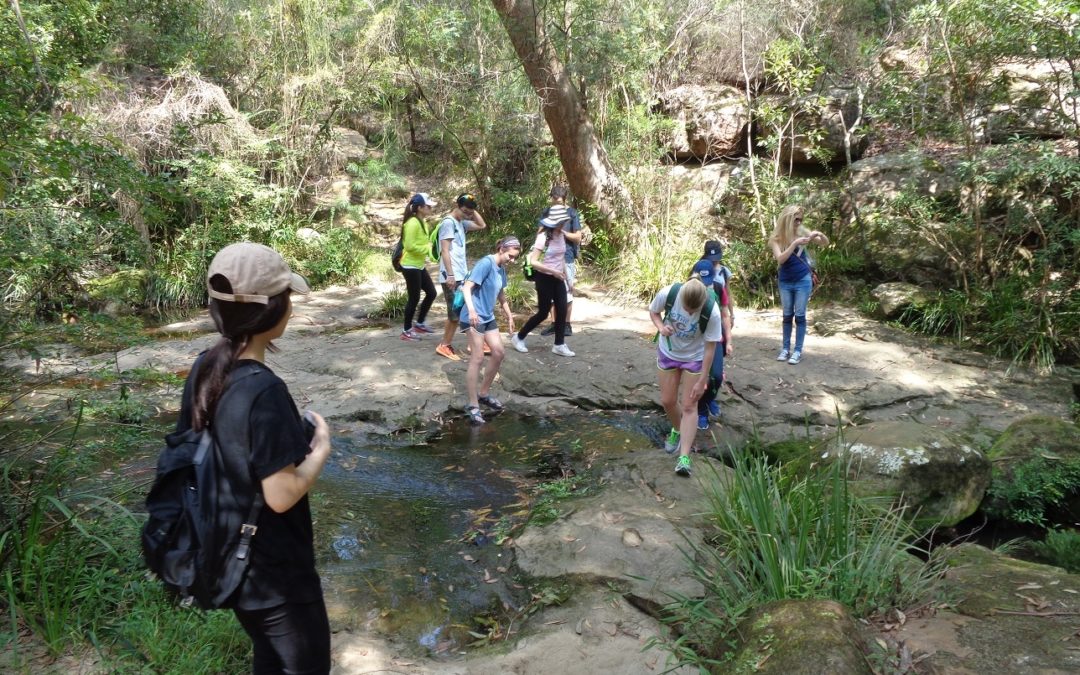 We all met up at Thornleigh Station and headed off along the Great North walk (GNW), which for the first km goes along suburban streets, so the first (and only) non-reptilian animal we saw on the GNW was somebody’s cat. Then it was into the Eloura Bushland reserve which then reaches a concrete fire access road which leads down to the upper reaches of Berowra Creek. There we had a choice of following the creek or taking a slight 160m detour to visit an “historic quarry”. I know that there is a very deep quarry “inherited”by Hornsby Shire Council near here, and I though this was it. It turned out however to be not much more than an overgrown amphitheatre with a plaque. So it was back to the GNW via a foot/bike bridge crossing Berowra Creek.

So we followed the creek deeper into the woodland, dropping into the valley and eventually crossing it. The creek was fairly low and the rocks not damp or slippery (unlike the last trip in August) and no leeches either. Then it was a steep climb up the ridge and at the top a water break was called for. After that the track followed the side of the ridge above the valley of the creek for a fair while, before rising yet gain and passing through more open woodland. Along the track I chose a shady spot with a little breeze to have lunch. The day had been very warm, about 28 degrees C and notes were made comparing the humidity of Sydney with other places (e.g., more humid than North Carolina).

After lunch we set off again through the woodland until eventually reaching the junction of the GNW with the Blue Gum Walk (not to be confused with the track of the same name in the Blue Mountains). From there the track descending gradually at first and then quite steeply down to the Fishponds.

The Fishponds was for decades a favourite swimming spot for scout groups and locals, but unfortunately it draws its water now from a stream leading from the Hornsby water treatment works, so it is now regarded as unsafe for swimming. The tell-tale foam in one pool, as well as a slight detergent-like smell, confirmed this. So the only “swimming” done was cooling feet in the water.

The dodgy water however doesn’t seem to worry the local Water dragon population, as some came  to look at us from a distance. We saw four in all.

We then retraced our steps up the steep climb until we reached the aforementioned track junction. The left track is actually unmarked but is the Blue Gum Forest Walk. It is a delightful track going at a gentle grade though open woodland covered with ferns. Eventually it ends at Dog Pound Creek, where we saw ducks and some people with tiny dogs, which got a pat.

From there it was a street bash along Rosemead street until reaching Horsnby Park, part of Berowra Valley Regional Park. There people who had only brought along 500ml and 600ml bottles refilled their water, before we set off again up a long fairly steep set of stone steps. But before that I noticed that there was another track to Fishponds from the park which must be shorter, but not obvious at Fishponds itself. So it was up these steps to reach the suburban area of Hornsby and before we knew t were at the Pacific Highway. We then went to the Station and some people decided to go straight back to Sydney, some decided to hang out at Westfield shops for a while, and some of us got smoothies and Yogurt at Westfield before returning back to the Station.

It was a good trip on a rather warm day with a forecast storm never happening although we did see some grey clouds at one stage. Everyone seemed to enjoy themselves, no leeches, and Alex (Zeyu, Dreamcatcher) learned that if you come to SUBW with a funny email name, it tends to stick!

Unfortunately there was one “no show” apart from the two who told me they had to pull out. This was annoying as some other people had wanted to join this walk but I thought that I didn’t have room for them.