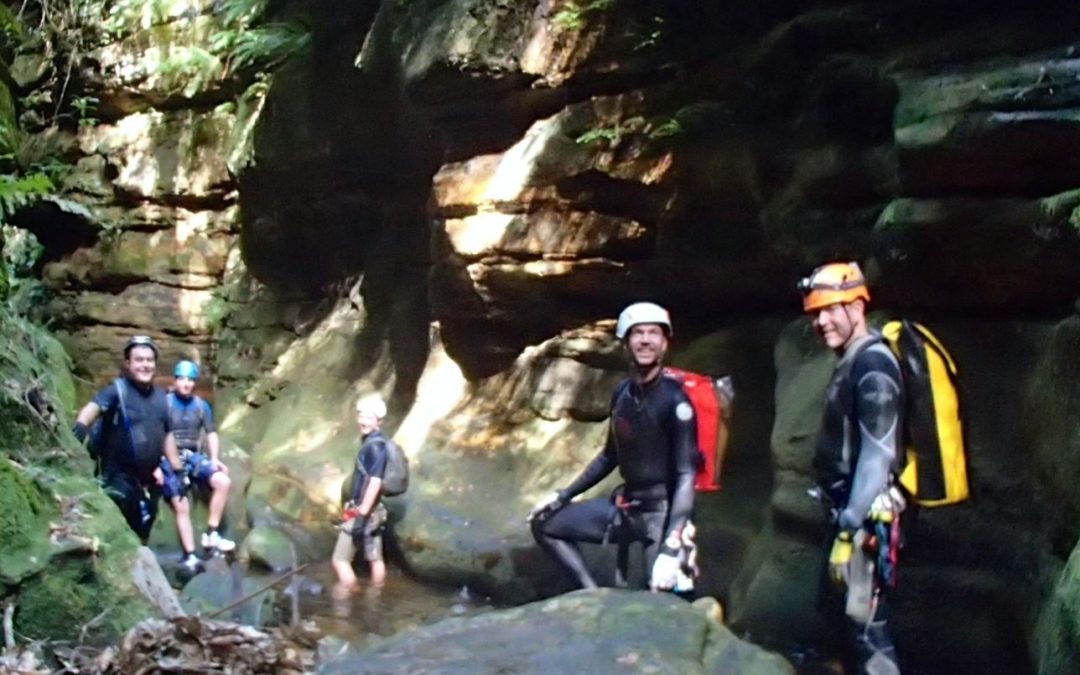 This was always likely to be a slow trip, as seven is a large party for Claustral and we had some relatively inexperienced trip members, including our guest, an overseas academic with interests in conservation biology who had joined us at the last minute. As trip leader I was happy to go slowly, as the previous time I joined a small, fit group through Claustral it took seven hours and I was really exhausted by the end. The plan was to take nine hours, leaving plenty of time to look around, take photos and appreciate the beauty of the place, with the planned finish two hours before sunset as a safety buffer. So we camped in the mountains and after distributing the gear were on the track at 8.30 as planned. A party of three headed off just in front of us, and a party of four passed us a little later. From the logbook that seems to be have been everyone through Claustral on this Saturday.

The other party passed us as we were doing some abseil revision in the entrance gully. We caught up with them at the first abseil and to speed things up we abseiled on their rope and gave them one of our ropes to set up the next abseil. There was not too much water flowing, so the abseils were straightforward, although abseiling into a dark hole is always a little intimidating for the inexperienced. We were now in the mysterious world of the Black Hole. We had a bit of a queue with the other party at the third abseil, and those of us at the end of the queue started to get cold despite our wetsuits as we waited in the darkness, knee-deep in the pool in front of the ‘window’ through which you abseil. However, it was good to spend some time in that part of Claustral, as it is really one of the magic places of the world. We stared at the high anchor up above, presumably used when the ‘window’ is under water and speculated about what this spot would be like with that much water in the canyon – certainly challenging!

All too soon we were out in the light again, making our way down the stunning constriction of Claustral canyon. When we got to the Beach at the junction with Thunder Gorge we sat down for lunch and discovered it was 12.30 – we were really moving very slowly indeed! Tristan explored the higher section of Thunder Gorge while the rest of us sat in a patch of sunlight and munched. Brendan’s ankle was playing up – apparently an old and recurring sports injury, so we supplied him with some compression bandage from the medical kit to strap it and give it more support for the rest of the trip. After lunch we headed off down the wide section of Thunder Gorge, which was really beautiful, with the midday sun getting in to create pools of bright sunlight. We took the climb-downs either side of the tunnel swim very carefully, mindful of Brendan’s ankle, and everyone thoroughly enjoyed the tunnel swim. Then we were passing the Rainbow Ravine waterfall and stopping at the ascent point. We caught up with the other party here, gave them their rope back, and they headed off as we started to take off our wetsuits.

The climb up Rainbow Ravine was uneventful – at the pace we were moving there was time to look around and appreciate the massive tree ferns and other rainforest vegetation, and the three scrambling bits were fun as always. Arriving on the Camels Hump we sat in the sun and had a good break, as we had planned. The other party now caught up with us – they had taken a wrong turn somewhere on the climb out. It was now quite late and I was pleased we had that extra two hours of daylight in hand. It is notorious that bushwalking accidents happen in late afternoon, as people who are already tired realize they are behind schedule and ‘press on regardless’. This was not going to happen to us! So we agreed that we would not press the pace, and take short breaks when anyone felt the need. After this, I got navigationally embarrassed a couple of times, hunting about for the track down from the Camel’s Saddle before checking the track notes and realizing it is a fair bit beyond the actual saddle, and later turning up Dismal Dingle for ten minutes – a truly silly mistake, given that we had been looking down on the Dingle and the Exit Gully from the Saddle and distinguishing them. These unforced errors pushed us just over our buffer of daylight, and as we reached the ridge at the top of the Exit Gully we had to get out headtorches for the track back to the cars. Fortunately, everyone had been told to bring a head torch, and we had checked this at the beginning of the walk. We even had one of the little Petzl e-lite’s in the emergency kit for the nameless person who dropped their headtorch somewhere in the canyon!

When we got back to the cars it was nearly 8.30 – the trip had taken nearly twelve hours!! The navigational errors cost less than an hour, and the abseil revision only about half an hour, so the reported times of eleven hours for large groups through Claustral are obviously realistic. This was a very enjoyable day, and I think had a fair margin of safety, but in future I’d keep a party for Claustral down to four.