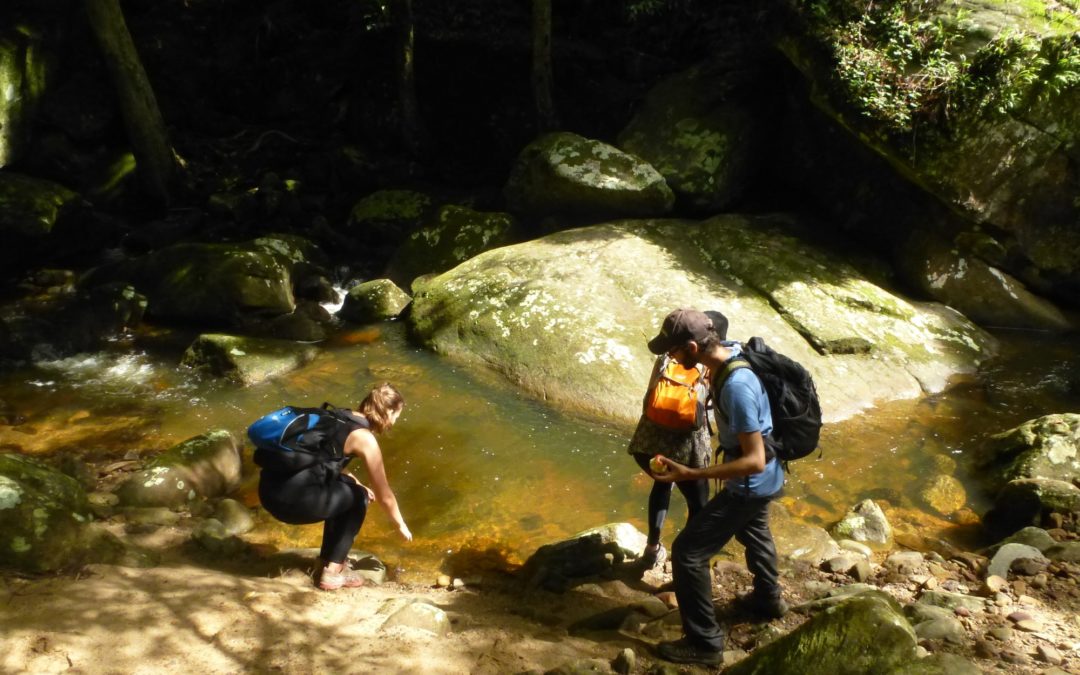 The start of a new Semester always sees an influx of new members to SUBW, so it’s good to do a beginners walk to welcome them to the wonderful world of bushwalking. And, although not intended, I also introduced them to the wonderful world of leeches! The walk was to Stanwell Park Gully and the Wodi Wodi Track, south of Sydney. This area is just south of Royal National Park and, despite it’s proximity to populated areas , sees much fewer visitors than the Royal, and is quite rugged in places.

It was a warm, humid day, and we set off from Stanwell Park Railway station up the Wodi Wodi track. A warning on the sign about the fabled black panther that apparently lurks somewhere in the Illawarra Escarpment caused us some concern, but we did not see any big cats on this walk. Instead much blood was spilled soon after, as the rough section of the Stanwell Park Gully provided everyone with the chance to collect leeches by the dozen. Everyone made it through OK, although some footwear may now be stained a nice shade of red….

We crossed many creeks that were quite full, found a pretty waterfall, and then made our way through the rough jungle, and up the 300m climb to the cliff lined Illawarra Escarpment. Extensive views up and down the coast were a highlight, and gave everyone a chance to de-leech themselves. The track then led south around the edge of the escarpment through lovely forest with many more creek crossings and the occasional coastal view. Blue mushrooms were plentiful, and we debated their toxicity. Maybe that’s one for Google…

Lunch was taken at what I call “Lunch Rock” which is a great vantage point looking south all the way to Kiama. Here you sit 340 m above the ocean , a true eagles nest, shared with a few resident blue tongue lizards.. We then went back the same way but then detoured towards the coast, instead of returning via the leech infested gully. On the way back we discovered an interesting stick insect, and a pair of wedgetail eagles which impressed us with their aerial prowess.

All this blue sea below us and the sticky warm weather made a swim at the end very appealing, so we dropped down to Stanwell Park beach for a quick dip. The surf was very dumpy so the swim didn’t last long, but it felt great to cool off. The beach kiosk was still open, so icecreams and cold drinks helped end the day. Although it was advertised as a beginners walk, we covered about 15km in total …I may have underestimated it a little bit !
But since most of it was along the tops it was mostly pretty easy walking.

I hope all the “newbies” enjoyed it as much as I did, it’s an area I love walking in, despite the creepy crawlies along the way !