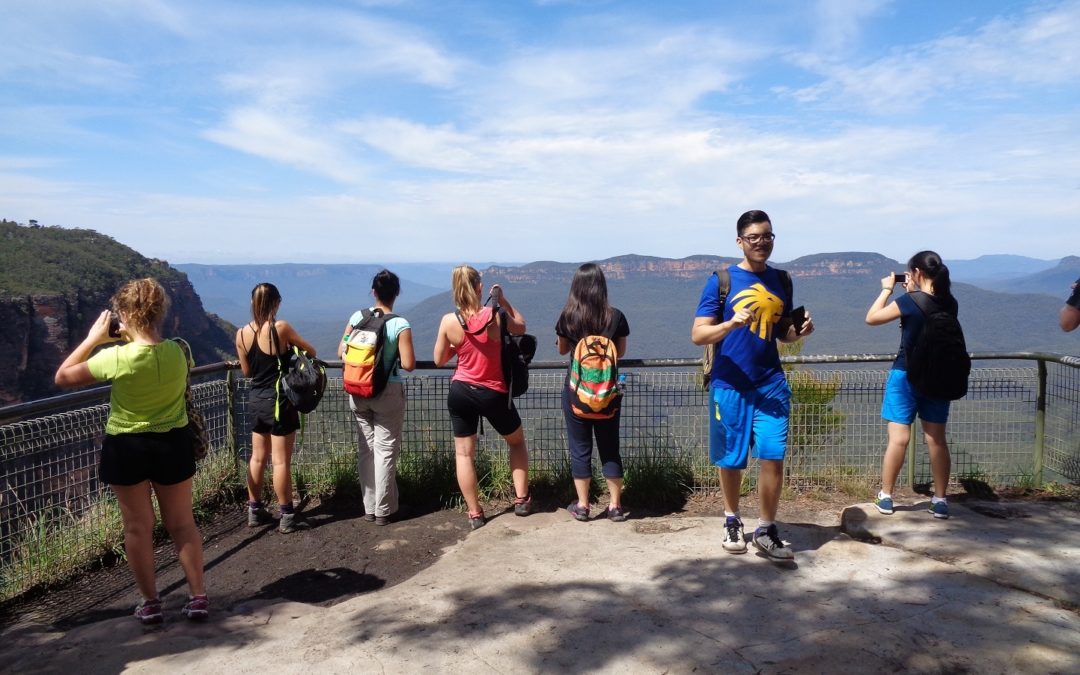 13 of us all met up together at Central Station for the train to Leura. Kang had a close call as she was lured to the wrong platform by the transport app, and on this morning the app was wrong!

So we all set off for the 2 hour train trip to Leura, noting the bat colony at Clyde and a couple of Kangaroos in the grounds of UWS at Kingswood, and these were the only wild creatures – bar one- that we saw on this walk. Vanessa, who lives locally, got on  at Bullaburra. So it was onward to Leura Oval via the compulsory loo stop in the shopping centre.

We had a group photo at the War Memorial gates at Lone Pine Avenue, and worked out that apart from Vanessa and myself, none of the others had been to the Blue Mountains before now. So it was going to be a revelation for them. We continued along the track via Lyrebird Dell to the Pool of Siloam, and the numerous spiderwebs I encountered across the track showed that we were the first to use it that day. That track in fact does not see a lot of tourist traffic and is not in good repair. After a photostop at the Pool of Siloam, we then went up to Gordon Falls reserve via steps I have called the Never Ending Steps, because it seems like it. You get around one corner and there’s more! It was the first real climb of the walk.

I decided after that climb that a break for a short rest and water was called for at Gordon Falls Lookout. The really good thing about the stop was that it revealed to our newcomers the grand vista of the view of Mount Solitary, Narrow Neck,  and Jamieson Valley. Even though it was a bit hazy, Mt Gibraltar at Bowral could just be made out in the far distance. That’s the good thing about this walk – there is no shortage of grand views along the way. So, after that lookout we proceeded along the Prince Henry Cliff walk as far as the Dangerous Bridge –  the one that NPWS has been working on for the past 2 years. This time (see my trip report of June last year) not only are there penalty signs but they have also installed security cameras to detect people who want to take a short cut across it (I guess quite a few have done so).

So there was nothing to be done but take the detour via Olympian Parade and  back down to another look out at Elysian Rock. On the way we passed the home of the parents of a World Famous Bushwalker. After that the track undulates a bit before reaching the track junction to go down to the Leura cascades.

After more photostops at the Cascades, we then continued on to the junction with Federal Pass, and descended down, partly via steel ladders. The a short break so Blake could do his pose at the bottom of the Falls (see photo) and then another climb up for a while before again commencing a descent along Federal Pass. Half way down a side track appeared which looked like a good lunch spot, so I chose to have lunch there instead of at Leura Forest a bit further on. It was a picturesque spot under towering cliffs, and dry (see photo).

Then it was on down Federal Pass, past Marguerite cascades, to Leura Forest. There we saw a Lyrebird scratching around for scraps under the picnic tables. It turned out that there was a good reason not to have had lunch at Leura Forest – Leeches! A couple were found trying to get on board various people and were removed. Then it was a choice between Dardanelles Pass and Federal pass to get to Furber Steps and I decided on federal Pass. It is supposed to be less of a gradient than Dardanelles Pass but I am not convinced. Still, it took us past a nice amphitheatre which would be a good spot for a concert if it wasn’t for the Leeches. Couldn’t help noticing we passed almost no tourists on that section of Federal Pass. Eventually we reached the junction with the west end of Dardanelles pass and took a break for water and also to remove some Leeches that had hitch-hiked on some people.

then it was a short distance to the start of Furber Steps. On the way we passed a large group of about 30 mainly girls who seemed to sliding down a large fallen tree into Katoomba Creek. At Furber Steps we went a bit further on to look at the Scenic Railway, which terminates about 100 m from the Steps. Here, some people discovered that 600ml of water is not enough for a bush walk, and Vanessa shared some from her good supply. Also here a couple of the group were alarmed to find that there were no toilets at the bottom of the Scenic Railway, and there were far too many tourists around to consider a bush toilet. So they opted for the 3 minute trip to the top via the train versus a 45 minute walk via one of the steepest steps in the Blue Mountains, to get to a loo-stop! A wise decision I think!

On the way up Furber Steps we saw some abseilers at Katoomba falls.

Once at the top they phoned me to let me know they had arrived, and I advised them to go to the Scenic World bus stop for the 4pm bus to Katoomba. As it turned out, the rest of us got to the top in time for the same bus, and we all rode back to Katoomba Station, with only a 5 minute wait for the train. It was on the Station that Vanessa discovered a hitch-hiking Leech.

So it was back to Sydney, Vanessa leaving us a Bullaburra. There was a minor drama on the way back when the train driver blew the whistle just after Lapstone and came to a sudden stop on Lapstone Viaduct. Out the window I could see 5 Police officers running across the viaduct, apparently in pursuit of someone we couldn’t see. After a short delay the train proceeded and we ended back in Sydney around 6.30pm. This was a good walk and a good tryout for the new members on a medium walk in the picturesque Blue Mountains, which also provided an excursion to this World famous area for the overseas students. Everyone appeared to enjoy themselves, even those who got some leeches.

I should add that why only a few people got leeches is because we didn’t stop to check for them except in dry places. Stopping frequently to check for leeches only makes it easier for them to hop on, and it’s a practice I don’t recommend.

Another good thing about this walk – there were NO “no-shows”!!