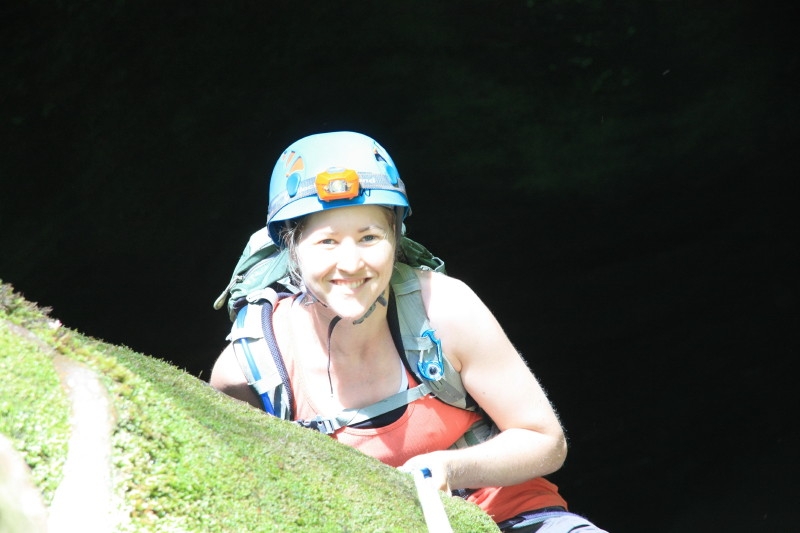 This trip had it all. Sweltering heat, thunder, rain, cool mist, snakes, an allergic reaction, great canyons, campfires and lots of abseiling.

But first and foremost, the risks and dangers of what we do was slammed home as soon as we got back to mobile phone coverage after the trip  because there came the shock news that on this same weekend on another SUBW trip, Helen Smith, a long time SUBW member, fell while en route to a canyon and was badly injured. All our thoughts are with Helen and our fingers are crossed for a speedy and full recovery. Hope to see you back in the bush soon Helen.

On arrival at Newnes late on Friday night with Peggy and Stephen in my car I found our camp already established. Harold, Carina, Elissa, Corrie, Natalie and Ruby had already arrived and tents were up. It was a balmy warm and humid night and after a few drinks and something to eat around a well-established campfire it was time for bed.

We woke to the sounds of birds and views of Wolgan cliffs all around. Any coolness of the early morning was soon lost, it would be a sweltering hot and humid day. Katy, Sheila and Martin arrived early in the morning and after a cup of tea and some breakfast we were ready to head off to our first canyon – Devil’s Pinch. Harold had yet to emerge from his tent but was nevertheless ready as soon as we announced that we were heading off imminently!

And thus began our first ascent of the Pipeline Track for this weekend. We all arrived at the top dripping with perspiration. At the top of Pipeline Pass we setup ropes on a small cliff so that those who needed abseil practise could have a try before getting to the canyon proper. This was just as well because Harold’s harness was too big and we had to rig up shoulder straps so he wouldn’t fall out of it!

Once everyone had got the hang of abseiling we headed into the headwaters of our canyon and at the first abseil we came across a party of 6 who were in the process of abseiling. So while we waited for the route to clear this was an opportunity for an early lunch. Then, one by one we abseiled down and entered the cool mossy depths of Devil’s Pinch’s upper canyon. There followed a series of downclimbs and awkward clambering moves before the second abseil, a more dramatic drop into a deep and dark canyon. This lower canyon was very beautiful and majestic, one of the deepest in the area, with wave after wave of green and glossy rock face rising to a mere slit of sunlight above. It opened out into the mighty cavern which marked the terminus of the canyon and in this deep and cool place some tall coachwood trees yearned for the light far above. The cool depths of the canyon gave way to a hot and loose slope leading all the way down to the Wolgan River. It was like walking in an oven compared to the cool confines of the canyon. When we reached the river we stayed a while to rinse off in the luke warm water. Then it was a hot walk along the road back into Newnes. While this was going on the sky darkened and thunder rumbled. By the time we got back to camp it was raining steadily and things got progressively wetter.

Meanwhile, Peggy was going red and puffy. Something was awry. Clearly she was undergoing some kind of allergic reaction, probably to an ant or spider bite somewhere in the scrub above the canyon. A couple of antihistamine tablets seemed to bring the rash under control but made her very drowsy. Once safely back at camp with a couple more antihistamine tablets in her, she settled into her tent to rest while we considered when and whether to take her back to Lithgow. Sheila was heading back anyway for the night. But the decision was made to let her rest in the tent and see how she was in the morning.

At the camp we were joined by Leo, who had driven into Newnes during the late afternoon. With Peggy resting in her tent under the influence of antihistamine the rest of us cooked our dinner fairly early, getting wetter and wetter in the process. The rain continued steadily until finally it became just too wet to stay out and before long we had all retreated to our tents to try to dry out and get some sleep.

The morning dawned warm and sunny but very sultry. Sheila returned from Lithgow with her partner Joe. Joe stayed in Newnes with Peggy who woke with her skin still flushed with allergy. We couldn’t risk Peggy going canyoning and scrub bashing with an active allergic reaction, especially if she might encounter the allergen again. So she went back to Lithgow with Joe to be checked over by a doctor. The rest of us plodded back up the Pipeline Track, and like the day before, arrived at Pipeline Pass hot and dripping with perspiration.

Today’s canyon is known as Starlight on account of its tunnel and glow worms, but it also goes by other names such as Newnes Canyon and The Amazing Wallaby Tunnel. Another good name would be Snake Pit Canyon because that’s what we found there. We chose a route to the start of the canyon which involved an abseil to get into the creek just above the canyon – a drop of around 18m. Then we came to the start of the canyon, a 20m drop into the dark bowels of the Earth. We had a quick lunch on the mossy rocks at the top of the abseil and then, one by one we abseiled into the cool gloom of the main canyon.

After the abseil the canyon began in earnest, closing in overhead creating a long dark tunnel. Head torches were switched on and in we went into the tunnel. I was the last down the abseil and no sooner had I entered the tunnel than I was stopped by news from the people ahead – the tunnel was guarded by a tigersnake. This was true – our headlamps showed a light coloured tigersnake with its head up looking at us, maybe even ready to strike. If it had a voice it would have said in a deep booming voice, “None shall pass”. Well, the problem was, we had to, because there was no other way out. I got a (nice long) stick and coaxed the belligerent but sluggish snake into a log. Then, one at a time, we got past it, stepping on the log and hopping onto the sand beyond. About half of us got through before the snake emerged again at the bottom of the log, looking at us again and saying, “None shall pass”, even though some of us already had and it was now looking in the opposite direction. The best thing to do next was to splash it with some cold water. This worked perfectly. The snake retreated back into the log and the rest of us hopped over it and got safely downstream of the log – and the snake. Still it was probably saying “none shall pass”, but a little more softly now, maybe just whispering it to itself. We decided to move on quickly. The deep dark tunnel had several deep wading pools and sandy sections. There were some glow worms but not an exceptional number. There was some evidence that this tunnel is occupied by bats. Then a ray of light from above signalled that the tunnel was ending and around another corner, a solitary coachwood tree, towering.

Then came our next snake. The canyon was still narrow and in it lay a large snake, possibly a king brown. We gave it as wide a berth as the canyon would allow. Around the next corner was a red bellied black snake. We breathed a sigh of relief at this relatively harmless species and just walked past. Finally the whole canyon and all the snakes were behind us. We rested in the deep gorge among the coachwood trees and did a head count – just to make sure everyone had got past all the snakes! Then we wandered down the beautiful lower gorge until it opened out into the oven that was the Wolgan Valley. Steeply down we clambered until we reached the warm and sunny Wolgan River which was brown and fast flowing due to last night’s rain. We lay in it, and for a while nothing could be seen except people’s heads surrounded by brown fast flowing water.

Back at Newnes Peggy had returned from Lithgow and looked much better, having been pumped full of cortisone to lay to rest her allergy. She was right as rain for tomorrow’s canyon. It was a lovely sunny afternoon and we relaxed in the shade playing cards and lounging around. Then came cups of tea and dinner around the fire as the daylight waned. Sheila and Joe headed back to Lithgow for the night, taking Ruby with them. Later that evening people from Dave Noble’s group came over to say hello, and we warned him of the snakes he would find in Newnes Canyon tomorrow.

Our Monday canyon was called Pipeline. The morning was cool and cloudy with a little drizzle, a marked contrast from the previous two sweltering days. Elissa, Corrie and Harold sat out today’s canyon whilst Sheila returned yet again from Lithgow for another day of canyoning and another hike up the Pipeline Track.

Today’s climb of the Pipeline Track was cooler and more comfortable than the previous two, and it wasn’t far from here to our first abseil. Today’s canyon was much shorter in distance and time but had many more abseils. We had plenty of rope for our group of 9 people so it was good that no one had to hang around at the tops of abseils for too long in this cool weather. There were many short abseils and swims and at times we had as many as 3 consecutive abseils rigged at once and the canyon echoed with the various rope calls – “rope free”, “abseiling” and “on belay”. A couple of the abseils were overhung and had tricky starts. We finished the canyon around midday and were back at our familiar Newnes campsite for lunch. The rain held off and we enjoyed a relaxing lunch around our camp.

Then finally, in ones or twos or threes we began the journey home. All agreed it was a great weekend of canyoning.