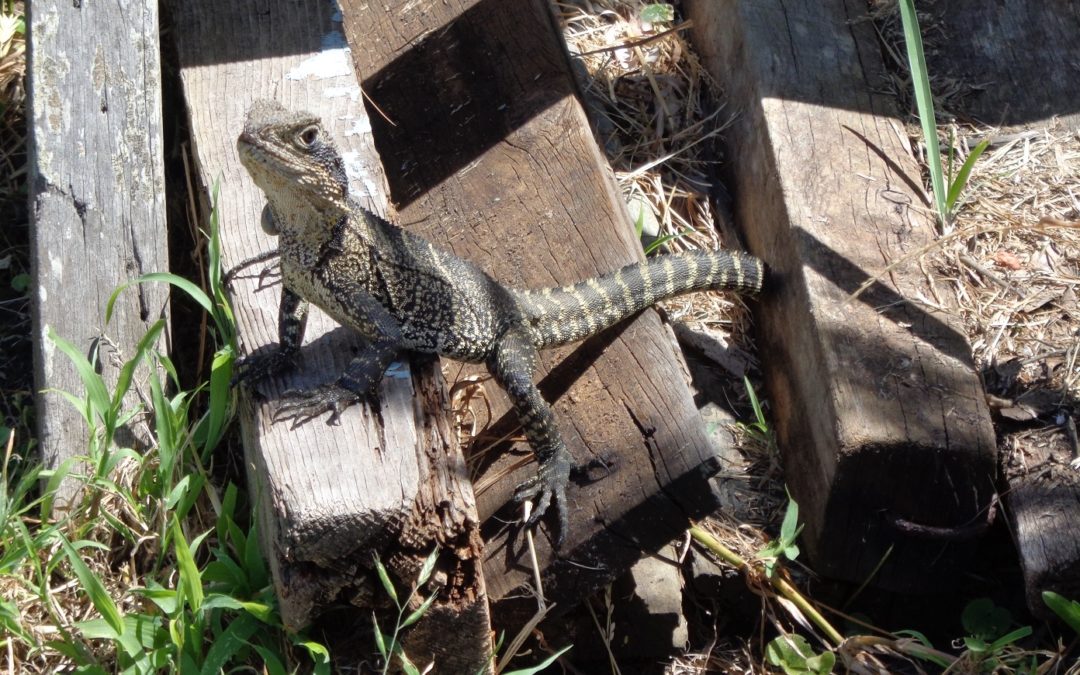 It was yet another lucky break with the weather, being a mild sunny day sandwiched between two very hot days. One complication though was the lack of trains to Circular Quay that weekend because of trackwork. A couple of people didn’t show up (apart from Javan who had to withdraw sick); whether they got confused with the replacement buses I just don’t know.

Anyway eight of us met up at Circular Quay for the ferry to Manly (noted the strong Brasilian contingent!) and once at Manly met up with John at the Art gallery – John having already walked from his car at Spit Bridge! We then set off along the Harbourside walk along footpaths and streets to Forty Baskets Beach, then suddenly it was waterside rock hopping to reach the track through Dobroyd Head. Along this track we found the side track to Crater Cove, and went along this quite rough bush track, watching out for snakes (as it was at this track junction last year where we found a Brown Snake). No snakes but once we reached Crater Cove with its historic Depression era shacks, plenty of Dragons came out as well as a Raven. The dragons got even closer when we opened packs for morning tea, suggesting that they have become accustomed to handouts from visitors. After a break at Crater Cove we retraced our steps back to the main path which continued through the open scrub until eventually reaching more the sheltered section near Castle Rock. We descended to this beach to have lunch.

After lunch we continued along the path until reaching Clontarf Beach were there was a chance for a loo stop and also to top up water bottles. A couple of us would have liked a coffee there but sadly the cafe there is closed until December. So we continued on the Harbourside track, eventually reaching the part where it runs along the old Manly-Spit tramway (hence the railway ballast on the track) and Spit Bridge itself. Here John gave leave of us to return to his car.

Although tempted by a couple of cafes at The Spit for coffee, the prices deterred us and we settled for coffee once reaching Balmoral. I had aimed to reach The Spit by 2pm for the low tide, and the timing was perfect – got there right on 2pm. To avoid a road bash, I had opted for the waterside rock-hopping from The Spit to Chinaman’s Beach which can only be done at low tide. This low tide was very low, being a spring tide, so for much of the way there were open sandy beaches exposed – usually covered at mid-tide. So we made our way round the boat sheds and the Northern sewer pumphouse (cleverly disguised as an ancient Egyptian monument), then along the shore to Chinaman’s Beach. The very last part of this section is over rocks covered with very sharp Oyster shells, and care needs to be taken not to slip.

From Chinaman’s Beach we made our way via local streets to the path at the north end of Balmoral beach, spotting a Skink along the way. Walking long the promenade of Balmoral beach some young women offered us packets promoting a brand of lollies, which we gladly took. At Balmoral, after coffees, smoothies and ice creams, we had a break on the beach and some of us had a swim. We saw small fish in the water there.

Then it was off along the track past the oval and up a seemingly never-ending fairly steep stairway to Middle Head Road. I decided not to go via Laurie Plunkett reserve and the old Balmoral tramway as it adds 1km to the walk, although it is a much easier gradient. Once across Middle Head Road the path offers good views of the Harbour. Then it takes a rather convoluted path before reaching Clifton Gardens Beach. After Clifton Gardens we were on the final leg of the walk to Athol Wharf, Taronga, via Bradley’s Head. The sign said “Bradley’s Head 800 metres”, but it was a very long 800 metres, more like 2 km!

We also saw a pair of Bush Turkeys near Clifton Gardens. These birds have at last reached Sydney Harbour’s north shore; until the 1980’s they were never found south of the Hawkesbury. After a rest at the HMAS Sydney monument at Bradley’s Head we continued down to the wharf, arriving just as the ferry arrived. Then it was a relaxing trip back to Circular Quay.

We were so lucky to have had a mild day for the walk.