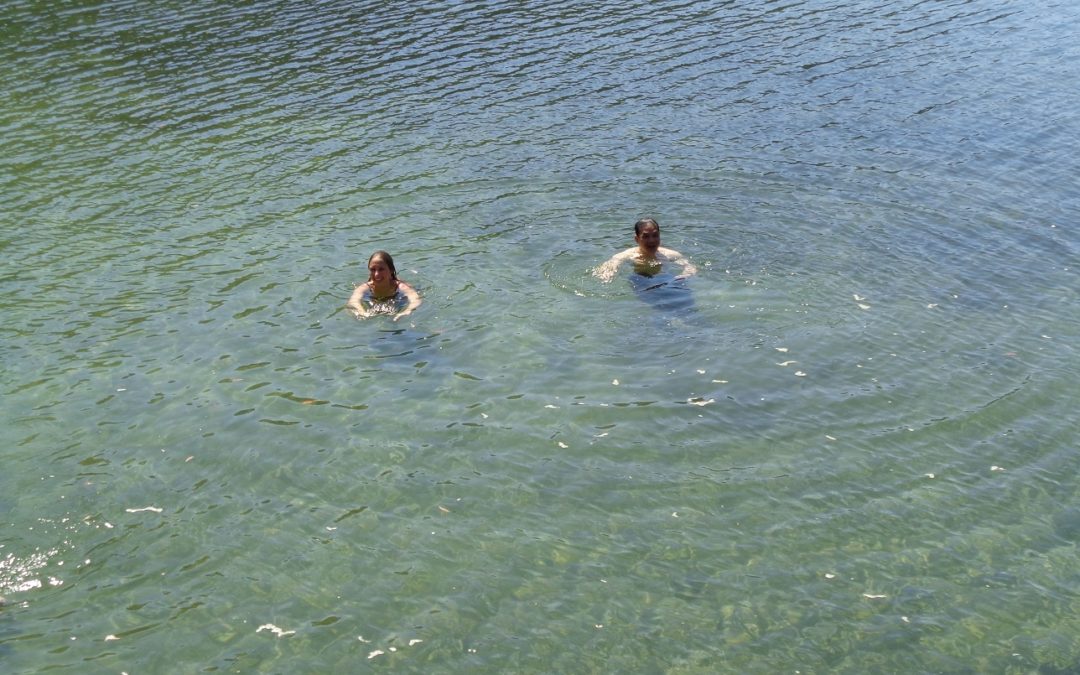 The walk got to an interesting start as, although almost everyone got to Cowan Station at the start time, my train was a little late and I texted Mariana to tell people to wait for me on the opposite platform. The I got a call from Heloisa to say that she had been delayed by the interminable trackwork at Erskineville, and was on the following train. As some of the girls decided to take an advantage of a comfort stop at the nearby Cowan boat shop, by then it was only 30 minutes until Heloisa’s tarin arrived, and given that there was a planned stop at Jerusalem Bay not far down the track, I gave her directions to get there along the Great North Walk, and we set off.

The track is the Great North Walk for its entire length of about 12km. We crossed the M1 (formerly F3) freeway and descended down along Yatala Creek, which starts as open country but soon becomes enclosed in a shady gully. Eventually we reached Jerusalem Bay and found it was right at high tide. Being already a very warm sunny day, Tony, Philippa and Mariana decided to go for a swim. They had to be careful to avoid stepping on the oyster shells which are embedded in the foreshore rocks and are razor-sharp.

Eventually Heliosa turned up, having made better time than we had on the track, and she too decided to take a swim. On the way she spotted a Goanna, as had Allan earlier (see photo).

After the swim we set off for the rather steep climb up from Jerusalem Bay, passing through a shady damp gully which is the only place on the walk where leeches are possible (but no one got any). No matter how many times I do this walk, I keep forgetting how steep it actually is! It actually rises 200 metres in less than a kilometre. Once at the top we all had a break and noted the profusion of yellow flowers on the bushes. From there the track levels then drops again down to a small creek (Campbell’s Creek). Then it rose again up another fairly steep section, at one point reaching a short climb with metal steps like a mini Taros’ Ladder. Along the section from the Bay we encountered a few walkers going in the opposite direction, having started from Brooklyn. Eventually, at the half-way point, we reached a wider path which doubles as a rail access road. This went on for some distance and after a while provides view over Hawkesbury River. We also encountered a cooler sea breeze here which was welcome after the hot walk.

We found a lunch spot with sufficient shade and a view and settled down to meat and rest. After lunch we set off again along this track which immediately starts becoming steeper and paved with loose stones and rail ballast. On one of these gravelly sections I slipped and slid; unfortunately my left foot momentarily stopped but the rest of me kept going, resulting in the muscles in the left thigh becoming over-extended and pulling the tendon. I was helped up and had a rest in the shade; the inflammatory reaction made me breathless for some minutes. But after a couple of Panadol supplied by Tony, I was able to resume walking, but with some discomfort, so the muscle strain wasn’t severe. After walking for a while we came to a clearing and found a large Goanna in a tree (see photo). Then it was across Brooklyn Dam (actually formerly the water supply for steam trains). After the Dam, the track climbed again on a more gentler scale than before, eventually reaching the top of the ridge before encountering the RailCorp concrete road which drops down steeply into Brooklyn. At this point on of the “boys from Brasil” needed a break (and a comfort stop), and so I decided to continue along the track and down the RailCorp road, as the older track, which is shorter and more direct, can lead to a dead end in the bush if one takes a wrong turn. Still puzzled as to why the NPWS prefers walker to use the RailCorp concrete road, which is rather steep and usually littered with leaves, making it a possible slip hazard especially if it was wet.

After a short wait for the “boys from Brasil” to catch up at the track end, we headed for the Angler’s Rest pub for whatever people fancied, which for most was a cold cider. Then it was off to Hawkesbury River Station for the trains home.

This was a good walk on a very warm day, relieved for some with a swim, and with good views. A bit hard on me though with the pulled muscle.

Postscript: fortunately for me the walk was on a saturday which gave me an extra day to rest my leg before work on monday. I was happy to find that I didn’t feel a thing while I wasn’t using my leg, which meant that there was only minor injury to the muscle and ligaments.Also fortunate that I have ready access to Physiotherapy advice at work. Two weeks later my leg is almost completely cured. Looking forward to more walks. Keep an eye out for Manly to Balmoral coming up.