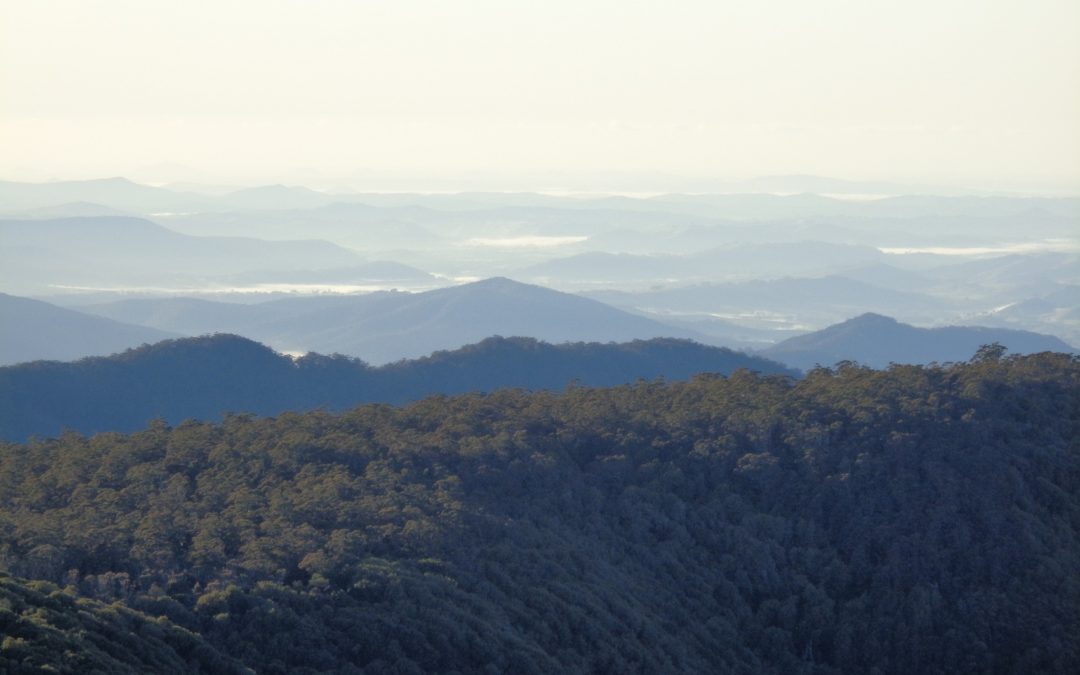 We all met together at Woy Woy Station on saturday morning, and as there were only 4 of us, decided to fit everyone in Tracy’s care (or rather, Tracy’s brother’s car, kindly lent for the trip). We then set off for the first stop which was lunch at Dungog at a cafe (see photo), which was pretty good. The staff even topped up a couple of people’s water bottles. Then it was off to Salisbury and the 8km of dirt road to Lagoon Pinch, the start of the Corker Track to the Junction of the Link Trail to Gloucester. The Corker track lives up to its name; it rises from 650m to 1550m elevation over 10km, and some parts are steeper than the average 1 in 10 gradient, more like 1 in 7. It is in fact an old logging road.

We hadn’t gone 2 km before Fancy started complaining that something was wrong – the back pack was too heavy. An examination of the pack – one on loan from SUBW Gear Locker – showed that the main front belt buckle kept becoming undone. When I tried to bend it out a bit it was so brittle it broke. The problem was fixed by using a length of strong fabric which Belinda had around her ground mat to secure it (see photo). It did the job. It is a concern, though, that this problem with the buckle must have been evident to the last person before Fancy to have borrowed this pack, yet not apparently reported to Gear Officer on its return.

SERIOUSLY, people, if you find there is a defect with any equipment borrowed from SUBW, report it!

Anyway, after the running repairs to Fancy’s pack, we resumed up the track, which at a section called Scout’s Alley even’s out somewhat for a while. The undergrowth is quite lush, as you would expect in the Sub-tropical rainforest. Noted nearby was a Stinging Tree (Dendrocnide excelsa), which under no circumstances should be touched, as if you did you would know about it for weeks afterwards! One suggested remedy is waxing (as in Brazilian waxing) to remove the stinging hairs! Check the photo to remind you if you ever encounter such a tree on a walk; the broad leaves might look like being suitable to wipe yourself after a bush toilet……need I say more?

So after passing by this section (and if Stinging trees weren’t enough there were also plenty of Stinging Nettles), the track climbed up again on it’s steepest section until reaching the half-way point at 1300 m, which is also the Barrington Tops snow-line. The tough climb is relieved by the beautiful forest with its massive trees including Antarctic Beech. We had a break at this midway point which is also a lookout to the Tops and the lush valleys below. Why there is a break in the trees just here is not clear, but may have been caused by a landslide in the past.

After this break, welcome after the tough climb, we continued on and after another km or so the track levelled out somewhat and it was noticed that the dominant trees were Snow Gums, which grow much bigger here than in the Snowy Mountains. It also suddenly became rather chilly, although the exertion was such that a t-shirt was still all that I needed. We looked out for the side track to the Selby Alley Hut – built by Newcastle Uni bushwalkers in the 1950’s. The side track is well hidden and I didn’t spot it – but could be found with very careful navigating. But as that wasn’t out plan to stop there (although Fancy was very tempted), we didn’t try to hard to find it. (It’s worth mentioning that the hut is not necessarily warmer than a tent – it is after all just a big corrugated iron box – albeit with a small fireplace – and iron is such a good conductor of cold!). After that the track again started climbing but then before we knew it we arrived at the track junction with the Gloucester Tops Track – a 16km track back to those Tops. Then it was another quite steep but mercifully fairly short climb along the track which eventually levelled off before finally dropping down a bit to the camp site at Carey’s Hut. Along the way I noticed a pool which looked to be a possible water supply for our camp. We reached Carey’s Peak in 4 hours which was good going, as it can sometimes take 5 hours. We then set up our tents; I put mine over some clumps of Snow Grass which made a good springy mattress as well as a pillow. Then it was off to the Lookout at Carey’s Peak for the magnificent view, which on a good days extends to the sea at Stockton Bight. Mists were gathering in the valleys below, and we noticed the clouds over the valleys were at our own height. Tracy and Belinda declared the view to be well worth the climb up the Corker track; Fancy wasn’t so sure…

I decided to use the water from the aforementioned pool as it obviated a 2km walk to Wombat Creek to replenish our water. As it was likely snow melt or rain water it looked clear, but to make sure it was boiled for the required 3 minutes to make sure most nasties were removed. The Center for Disease Control (CDC) website recommends a “roiling boil” for 3 minutes at that altitude due to the lower boiling point of water there (94 Degrees C).

I also conducted an experiment with the lower air pressure at 1600m; I had sealed an empty soft drink bottle at sea level, and on arrival at Carey’s Peak it was taut as a drum. It opened with only a slight hiss – not quite the effect I had wanted.

Then it was time to start a cooking fire in the hut. The Snow Gums shed copious amounts of bark which made excellent starting fuel, and despite it having snowed some days earlier, we collected enough fallen twigs and branches to get it going well. Well, not quite; the fuel was still just a little bit damp, and the ventilation in the hut is rudimentary, so we were soon getting smoked out. This was solved by moving the fire under what passed as a chimney, and also the fuel dried in the heat and we were left with a good cooking fire as well as warmth.

After dinner we settled in to our tents as the clouds had come up hiding the stars. Later on around 11pm a light rain fell. Also, a Boo-book Owl started calling out loudly in nearby trees and kept it up for quite a while. I recorded it on my iPhone but Flicker won’t upload the audio track.

Next morning we got up at sunrise to greet a clear deep blue sky, and paid another visit to the lookout. As it was early morning the vapour from the cooling towers of Liddell Power station near Muswellbrook could be seen in the far distance. Another small fire was started outside for breakfast, as the hut fire had died during the night. There was no frost though, and the ground seemed fairly dry despite the light rain overnight. Then it was tents packed up and stories swapped about how we slept. Tracy said she was a bit cold sometimes, Belinda said she got hot at one point, and Fancy said she got rather cold. Unfortunately Fancy hadn’t brought along the tent fly so there was only one inner fabric to protect her from the cold – which it didn’t. As for me, I did feel my feet getting cool at one stage, but this was solved simply by resting my feet on my pack. Otherwise my $14-97 tent kept me snug, as did the snow grass underneath.

We left a large dry log in the fireplace for the next visitors, and then set out on the walk back down to the car, same way as we had come up. Apart from a couple of small saddles it was downhill all the way. Even so, although it was easier on our lungs, just as much if not more care had to be taken on the steeper sections. The air also warmed up very quickly as the morning progressed. We stopped at the view point at 1300 metres again for a break, then it was the last section and we reached the car in less than 3 hours. At the sight of the start gate, Fancy let out a whoop, so pleased she was to get off the track, which she had found hard going.

Then it was back to Dungog for lunch in a cafe which which served a great meal. For a small country town it was quite busy. Around the corner we spotted the “Dungog Picture Theatre”, where the Dungog International Film Festival is held (no, not kidding). Then it was back to my place via Maitland, and then Tracy, Belinda and Fancy continued back to their own homes. As for the empty soft drink bottle, I conducted the experiment in reverse; sealed at Carey’s Peak, it had partially collapsed under the great air pressure at sea level when I got back home (see last photo).

This was a great walk in a fabulously scenic area in mostly fine weather – well worth the effort required. It was also a good learning experience about how much you need, and don’t need, to carry on overnight walks.