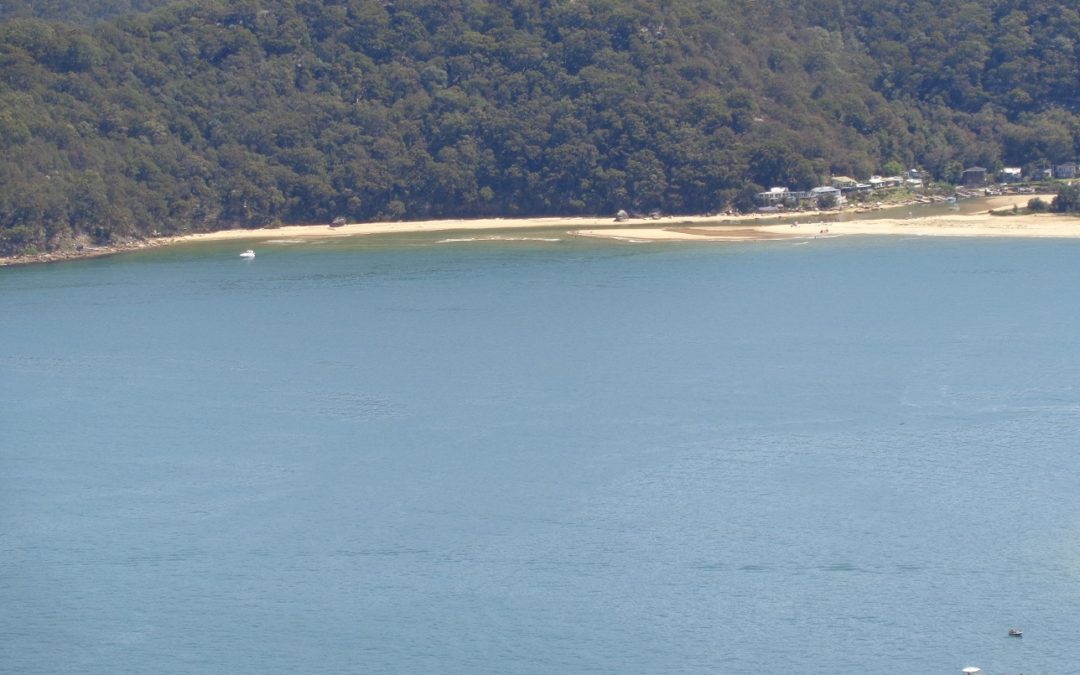 A few people were caught out by the change-over to Daylight Saving the same morning, especially some overseas students, so we were a bit down on the numbers expected. Happily there were no “no-shows”. Still, we all met up at Woy Woy Station, and Linda left her car there and we all went in mine to the start of the walk at Umina Beach. As it was already a very warm day, the beach was becoming crowded and we weaved our way through the throng, did a creek crossing at the south end of the beach, and continued along the rocks around the Mt Ettalong headland to Pearl Beach. We noticed the tide was coming in. Eventually we reached the shops at Pearl Beach and a couple of us picked up a coffee and we continued on to a morning tea/coffee break at the Crommelin Native Arboretum. While there a male bush turkey came up to us expecting handouts, as did a magpie.

After this break we continued along the Pearl Beach – Patonga fire track, which rose gradually first through dappled shade and later to open country. The temperature was warming up (eventually reaching 32 Degrees C) as we arrived at Warrah Lookout which gave great views over the Hawkesbury River estuary, Palm Beach, and Patonga. At this point the track joins the Great North walk (GNW). Then it was downhill to Patonga along the GNW which drops very quickly along a fairly rough bush track. We arrived at the beach and headed straight to the Fish and Chips restaurant where Linda and Imogen bought lunch. I did advise earlier that it was a popular place, and this day it was an understatement – the queue almost stretched out the door! Still, they got served reasonably quickly and we settled down inside the cafe for lunch.

Funny how although there were lots of people on the beach, that almost no-one goes swimming at Patonga – may have something to do with it being at an estuary and shark-prone! Noted also several prawn trawlers in the bay.

After lunch we returned back to Pearl Beach the way we had come – the short and fairly steep climb up out of Patonga being rewarded with a much more gradual downhill grade to Pearl Beach after Warrah lookout. At Pearl Beach we stopped for a swim, welcome in the very warm weather. Us locals thought that the water was a bit cold, but Megan from the U.K. said it was the warmest water she had ever swum in! Then it was back to Umina, but as the tide had risen right up we detoured for a short road-bash along the Mt Ettalong Road before dropping down to the beach. The it was back to my car and back to Woy Woy Station where we all went our own ways.

This was a nice scenic walk in good beach weather.