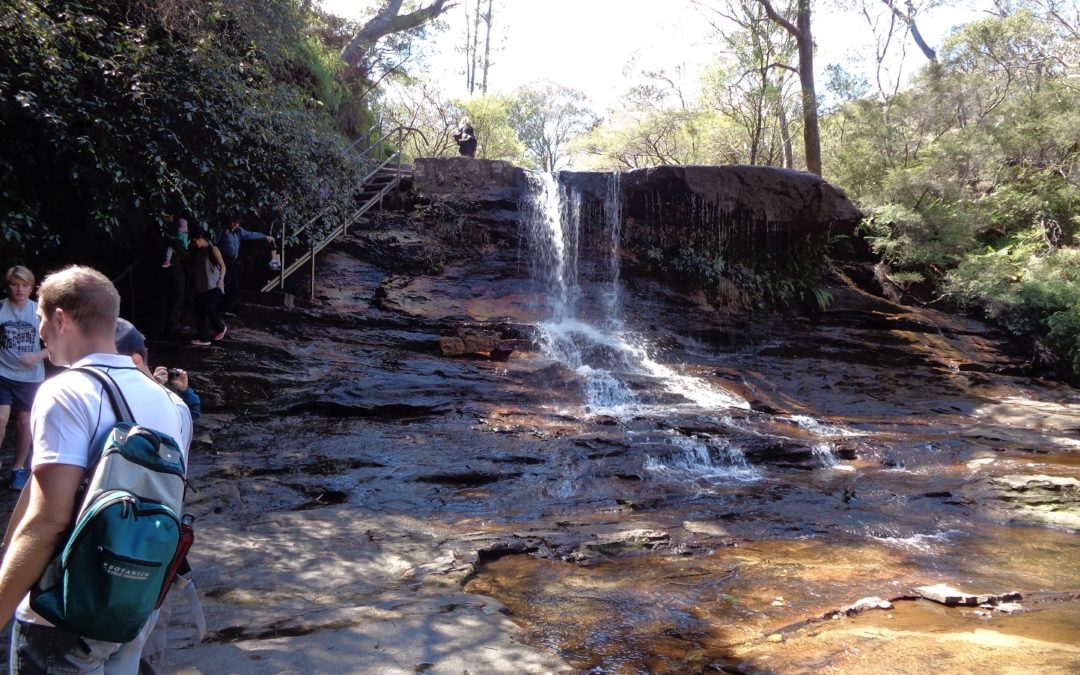 Six of us met up at Central Station and proceeded west in the Blue Mountains train, collecting Conrad at Parramatta. On the way we noted the Bat colony at Clyde. We arrived at Wentworth Falls where Janice, Tim, Paul and Liz were waiting. They entertained themselves while waiting for us by watching the steam train which passed through there ahead of our train. So we set off under a sunny sky for Wilson Park, where Charles Darwin’s Walk starts (so named because Charles Darwin walked it in 1838. The walk more or less follows Jamison Creek as far as Wentworth Falls (the waterfall, not the town). At the start of Darwins Walk it passes through a glade of pine trees which reminded Paul of the forests in his native Lithuania. The track is not in good condition and is undergoing remediation, and while looking backward to take the photo of the group passing through the pines I failed to see a gutter over which I tripped up, falling flat on my face. I escaped without a scratch however, and it goes to show that a semki-formed track can be more dangerous than a rough bush track, as on the latter you are keeping a closer lookout for hazards.

So eventually we reached Queens cascades, and it was disappointing that we did not see any Yabbies in the creek. Then it was onto the “Grand Stairway”, a rather steep walkway which hugs the side of the cliff, and goes down to the bottom of the first part of Wentworth Falls. There were plenty of tourists in this section.

Several more steps and twists and turns eventually brought us to the start of Wentworth Pass (up to now we were on National Pass). Counter-intuitively it starts heading in a reverse direction until reaching the top of Slacks Stairs, which are not stairs at all but a series of seven almost vertical ladders, three of which are enclosed in a cage. So down we went, ad we eventually reached the bottom of Wentworth Falls. Here we had morning tea. Also in this section we acquired a 12th walker, a lone woman who was advised by Allan to stay with us as far as the junction of Vera Falls track as a safety measure.
We also met a German girl from Munich going up the stairs the other way (funny how we keep meeting German girls from Munich – read my trip report of Manly -Taronga last November). Apart from her there were no more tourists – the ladders and the rough track puts off most of them.

After a break we set off along Wentworth Pass which is fairly rough and drops and rises frequently at places where there seems to have been landslides in the past. It crosses Den Fenella Creek at one point, and eventually reaches a crossing of Valley of the Waters Creek. the old rickety bridges are now gone, requiring some careful rock-hopping. Then we reached the junction of the track which heads downhill to Vera Falls and uphill to empress Canyon and eventually to the Conservation Hut. Here we left our temporary 12th walker and headed south down hill along the Vera Falls Track. This track is rather rough, narrow and steep. Along the way the junction with the Roberts Pass track was noted. After a while it reaches a crossing of the Valley of the Waters Creek which requires even more careful rock hopping. I managed to put one leg in the water on the way.

Here we had lunch, and we weren’t expected to be serenaded by a hovering helicopter almost directly above us. It soon became apparent it wasn’t a sight-seeing copter as it stayed round for several minutes, and it was likely there to rescue some hapless tourist who may have fallen on the track. Indeed a tourist was lost on this very track only the previous Sunday. It was decided not to continue on to Vera Falls as the track is rather dodgy, so after lunch we returned back up the steep Vera Falls Track to return to the top via Empress canyon. This track is as steep as the Golden Stairs but in better condition and wider. It also passes several waterfalls: Lodore Falls, Sylvia Falls and Empress Falls. At the bottom of Empress Falls there is a pool which contained three abseilers in wetsuits. Once past Empress Falls the track climbed up to the Conservation Hut via a series of wooden steps which never seem to end. While taking a breather on the way up a Lyrebird ran past the track beside me but ducked into the bush before I could get a photo.

On reaching the Conservation Hut we found it quite crowded so decided to continue on back to Wentworth falls Station via Falls Road and Wilson Park. We reached that station just 4 minutes before the next train, so the train people decided to forgo a coffee at the local shops and take the train. So we said goodbye to Paul, Janice, Liz and Tim. On the train trip home we passed the aforementioned steam train at Valley Heights, and also spotted a couple of mobs of Kangaroos in the grounds of UWS at Kingsford. On reaching Central we went our own ways.

This was a great walk on a fine day, not too hot, and Megan on her first trip to the Blue Mountains, said that the views exceeded her expectations.