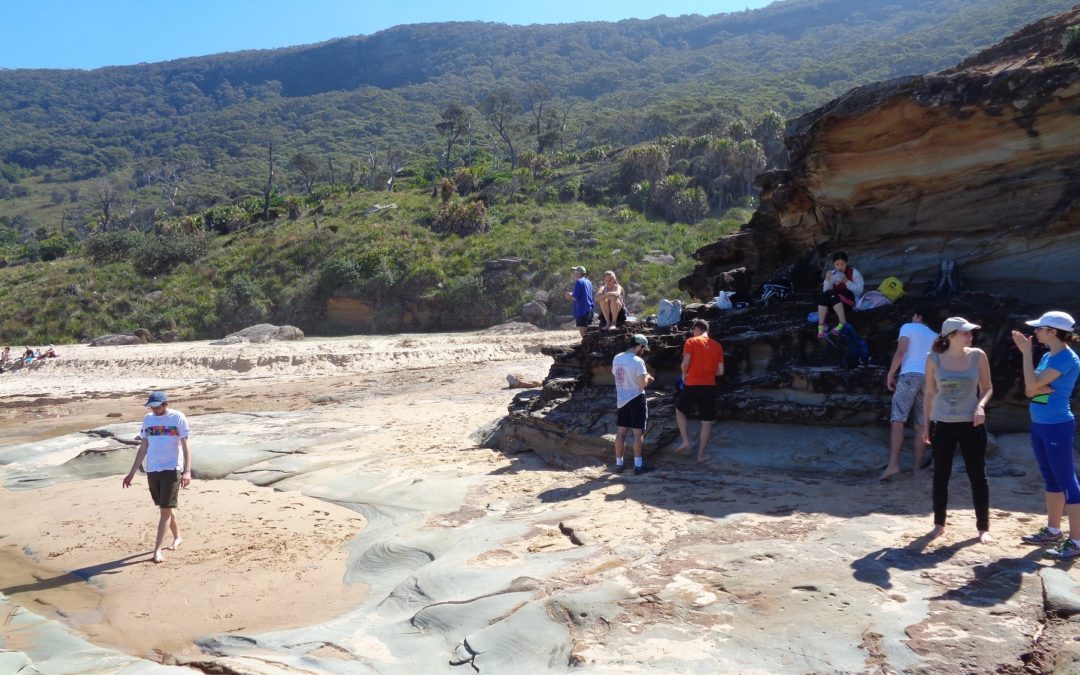 The morning dawned fine as I left home, promising yet another fine Sunday – my luck still holding after the previous several rainy days. On arrival at Central I noticed that the down escalators to the platform weren’t working, so I hoped that no-one was leaving it to the last minute as they would be caught out. As it turned out only one guy was a no-show. After collecting everyone at Central (and Heloisa at Redfern) we had an uneventful trip to Helensburgh Station, getting there is just under an hour.

Of course, can’t start a walk at Helenburgh without visiting Metropolitan Tunnel! So we set off on the short 5 minute walk to the Tunnel, finding that the recent wet weather had left it quite soggy underfoot (see photos). Some of us found it easier to walk balancing on the rail head. Anyway, as we went further inside the tunnel, the ground got muddier and muddier until it got to the consistency of porridge, making it suck your foot in and at the same time being very slippery. With shoes already muddy , walking in the gravel section in the base of a small stream in the tunnel seemed safer. After a suitable distance in, we turned off our lights, and let our eyes become accustomed to the dark. Soon a lot of glow worms appeared on the ceiling of the tunnel. They put on a reasonable show, though not as good as at Newnes as Metropolitan Tunnel lets a fair bit of light in, being dead straight. After seeing the Glow worms, we exited and proceeded up the road to the service track above the station, which connects to the start of the Burgh track near Helensburgh Tip.

(Warning: History content: Metropolitan Tunnel is the 4th and second-longest of the 5 original tunnels on the Illawarra Main Line, built in 1888 and closed in 1915, when the railway was deviated to it’s present alignment. It is 624 metres long, but presently blocked at its south end by a colliery).

After reaching the service track we came across our first obstacle in the form of a fallen tree which we climbed over. Then it was along the track down to the Hacking River crossing. The track had been churned up by trail bikes (who can legally use it on this section) so was muddy in several places. We could also hear the noise of dozens of motorbikes speeding along nearby Lady Wakehurst Drive. Then we reached the side track through the palms leading to Hacking River. It is not signposted – just an NPWS arrow. What is more, shortly before reaching the Hacking River it is quite vague and careful navigation is needed.

At the crossing we found the river up a bit but no real obstacle to crossing it on the boulders. Conrad though discovered that the apparently dry surface on one boulder was anything but – rather slippery and he went in up to his knees. Having decided that he couldn’t get any wetter he stood in the water to give a helping hand for the others. The River wasn’t finished yet; Julie just saved herself from slipping and in the process her sunglasses dropped into the river. It’s swift current carried them away – never to be seen again. (BTW some walks guides describe it as a tributary of Hacking River, but it actually is the River itself).

After everyone had crossed over, I advised everyone to quickly move to Lady Wakehurst Drive, as it was definitely Leech territory, and we crossed the road and began the ascent to the top of the escarpment at Garawara Farm. The track goes through pleasantly semi-open woodland but seems to go upward almost endlessly. We encountered a couple of fallen trees across the track, which evidently doesn’t see a lot of use nowadays. Once safely out of Leech territory we stopped for a water break, the continued on to reach a service trail from Garawara Farm. I noticed an old sign: “Burgh Track” which pointed along the service rail and not the track itself. This was fixed before we moved on. We reached the Garawara car park and the Cliff Top track junction, then continued along the track which goes down the escarpment to Burning Palms Beach. For the first time on the walk we encountered other walkers as well as surfers coming up from the Beach. At first a steep grade down, it soon level off on reaching open country which also provided great views of the escarpment as far as Wollongong. We reached the junction with the Coast Track above the beach, and it is very rutted in places. We spotted a young Water Dragon there.

So we reached the beach, and found a spot which offered a choice of sun and shade (there was a cool breeze blowing from the south-east). There we had lunch. The beach had been badly eroded by the winter storms and it was also high tide. A curious feature was the large amount of Pumice-stone on the beach – evidently from an underwater volcanic eruption somewhere. The water was disappointing – too rough for swimming but waves not good enough for surfing – hence the departing surfers we saw earlier on the track. At the beach we spotted a leech which had dropped off someone – a tell-tale bleed on Conrad’s ankle indicated where it probably came from, although he hadn’t noticed it before then.

After lunch we headed off along the Coast Track towards Otford, passing through Palm Jungle. On the way we encountered the new elevated walking track which by-passes the former trench-like track through the Lomandra. In Palm Jungle we also noted new stepping stones across the three rills which avoids a water crossing in damp conditions. they reminded me of the Roman speed humps in Pompeii.

The track then rose up to climb to the top of the escarpment, along a lot of seemingly endless steps. Once you reach some stone steps, however, you know you’re close to the top. Then we re-joined the Cliff top track (called the “Squeezeway”by WildWalks guide for some odd reason), and continued through woodland until reaching the Otford Lookout. On the way we spotted a Lyrebird scratching in the litter, which seemed not too bothered by our presence, although not easy to photograph. Then it was along the least attractive part of the walk – alongside Lady Wakehurst Drive with its traffic – until reaching the Otford Pie Shop.

At the Pie Shop we had only 15 minutes to train time so it was only a take-away coffee for me. Outside a flock of Brown Cuckoo-Doves were feeding. These are actually pigeons, not cuckoos, and they have quite short legs so they walk rather clumsily. there was also a Cocky (White Cockatoo) which the shop owner doesn’t like because they bite people’s fingers.

Then we went down to Otford Station along the steepest part of the walk, arriving about 4 minutes before the train arrived. Then it was a leisurely trip back to Sydney, the train being 8 cars for a change so we had no trouble getting seats. It was a good walk on a fine mild sunny day –  “hard but nice” said Alex. Everyone enjoyed it.