Thornleigh to Hornsby via Fishponds 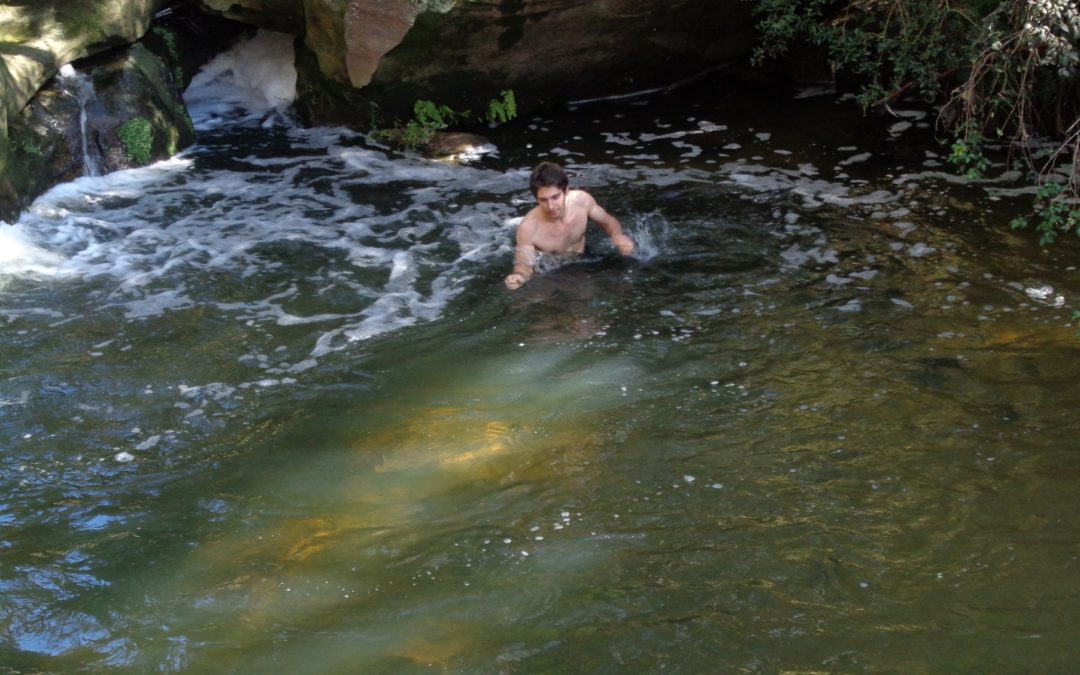 We all met up at Thornleigh Station, with slight initial confusion caused by the presence of another smaller group doing exactly the same walk (although a little behind us). We were fortunate to have the first completely sunny day after two weeks of rainy days. We set off through suburban streets for about 1 km before reaching a clearing between two houses which oddly was not marked as being part of the Great North Walk (GNW) but rather Eloura Bushland Reserve. It could easily be missed. Thios track follows the route of an old quarry railway called “Thornleigh Zig Zag, and at one point had old rails (but new sleepers, apparently added to give authenticity). We then descended through bushland along a surprisingly rough track until suddenly reaching a concrete road which we followed for a short while before branching off to descend to Berowra Creek. It, and all the creeks we crossed were running full after the recent run of wet days, an creek crossings needed care due to slippery rocks.

We crossed over, with a couple of “near misses” on the rocks and then ascended fairly steeply to a ridge above the creek’s valley. It went through open woodland, and gave no hint that suburbia was only about 500 metres away. There were also good views into the valley, and we eventually decided to stop for lunch in a sunny area on the ridge, which as it turned out was surrounded by Christmas Bush – not in flower as it wasn’t Christmastime!
Here we discovered that four leeches had hitchhiked on some of us up from the creeks.

After lunch we headed along the track towards Fishponds, a large waterhole along Berowra Creek. The track steeply descends to the Fishponds, which in summer is a favoured swimming hole, and it is also a traditional destination for decades by Scouting groups. I wouldn’t swim in it, given that, as we noticed later, water from a side creek is fed by the Hornsby Water Treatment plant upstream. Still, Felix gave it a go, and found the water not that cold despite it being the last day of winter.

Then most of us except Tom and Ellyse, who had their car parked on a different exit of the track, headed back out of Fishfonds Gully, and up the grade to the final leg of the walk back to Hornsby. After walking through a pleasant forest with ferny undergrowth, we were presented with an alternative track down to the Blue Gum Forest (not the Blackheath one!) which we took. And it turned out to be a nice walk.

It eventually exited below Hornsby Park, where we heard Kookaburras and saw one close up. Heloise thought they sounded like chattering monkeys in Brazil. Along the way we came on a tree with a very large hollow which Maia went into, but it was not a bad tree and she wasn’t swallowed up needing Tom Bombadil to rescue her like the Hobbits did. (If you don’t get that, read “Lord of the Rings” by JJR Tolkien)

Eventually we reached the “Heritage Steps”old stone steps in Hornsby park which rose steeply out of the valley and into suburban streets. Before we knew it we were suddenly on busy streets and shortly at Hornsby Station, getting there 5 minutes before a fast train back to the City.

It was an enjoyable walk on a fine late winter’s day.

Unfortunately there were two “no-shows”, which was annoying as two people had asked if they could come but there were no places – so I thought.
One person texted me at 9.30pm to say they couldn’t come as “something had come up”. Leaving it a bit late, as by then it simply isn’t possible for a potential replacement to organise what they need for a walk the next morning. I should point out that by being a “no-show” you won’t get priority to join up on other walks that fill quickly. Some other walks leaders won’t consider “no-shows”at all!