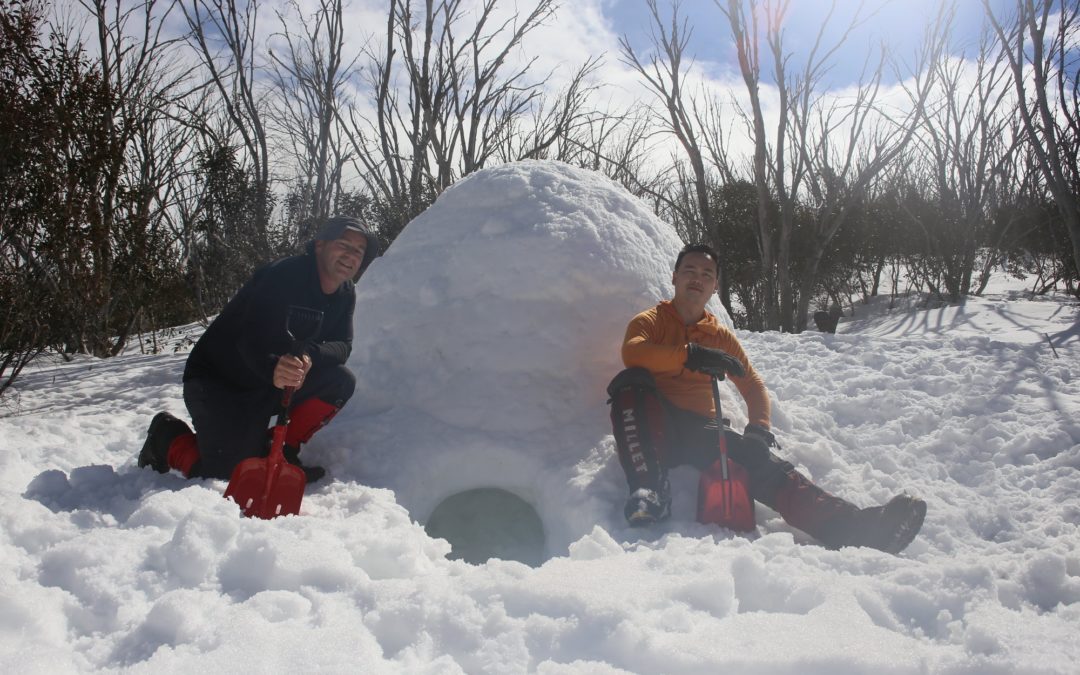 I have been to the Snowy Mountains many times but, being so large I still have many places that I have wanted to explore. With the great cover of snow currently, and spring fast approaching it seemed like a good chance to get back down there for some climbing and snow camping. Sadly, a few people were not able to sign up due to other commitments, (and also perhaps my short lead time and rather strict snow safety criteria?) so the trip ended up with only two, me and Ken.  I knew Ken was keen on igloo building, so he brought an array of tools to help build one. He has had two previous attempts at constructing one, but to date he hadn’t managed to complete it.

We drove down close to Jindabyne on Friday night, and stayed at a caravan park to get a comfortable start on Saturday. The day was a bit foggy but revealed a  classic bluebird sky , it was going to be a great day! Starting off at Cascades near Dead Horse Gap, we pushed straight up the steep snow slope of 200m towards the Ramshead. Pretty warm going,  it was t shirt weather with a full pack. After some time,  Ken was feeling the effect of bad blisters in his mountain boots. We found a nice elevated campsite with plenty of snow about and nice views without being too exposed to the wind. We set up camp on the snow. After lunch , we set off to climb the Ramshead of 2150m , but soon after Ken’s blisters meant he decided to turn back. He was also keen to begin work in his nemesis, the igloo! So I set off solo and navigated through softening snow up around the basin and ridge that led to the Ramshead.  It was beautiful and wild.

There were a few All Terrain skiers about taking advantage of the spectacular wild runs, but otherwise I was alone. On the way I found a freshly deceased brumby carcass. No wonder it’s called Dead Horse gap! A few sections got very hard and icy and really tested me out. I had brought crampons and ice axe but hadn’t seen the need for them on what looked like a straightforward climb, so left them at camp.

I regretted not bringing them! I managed OK,  but a few times things felt decidedly sketchy! My snow shoes have a good cleat on the base that gives decent ice grip, but the axe and crampons would have been much better. My legs were burning, as my Atlas snow shoes really work best straight up or down, meaning I had to walk sideways with my feet facing up the slope sometimes if traversing. Owwwww!

There was a lot of rime ice at the top. Rime is ice that forms with wet and windy conditions and makes amazing shapes but is also treacherous to slide on. I made the summit around 3pm and enjoyed exploring the rocky crags of the Ramshead and enjoyed the solitude, and the amazing views. Coming back was easier, as I could see down and plan a shorter route back across the head of a gully.

I returned to camp to find Kens making good progress on the base wall of the igloo. He was using an “Icebox” igloo maker, a collapsible box that creates the “bricks”. You just pack the snow into the box, one brick at a time. You have to shovel heaps of snow, up to 7 shovel loads per box!  You then spiral around making your blocks and angling the walls in each time, which is the critical part. The angle has to keep going inwards so that you head towards your dome roof. Sounds easier than it actually is.

After dinner, Ken retired to sleep, and to keep myself warm in the -4C air, I finished digging the entrance tunnel. I saved testing it till the next day lest the whole thing collapse on me while Ken was sleeping!

The next morning you could see a change starting to move in, so the race was on to finish the igloo. It took about another 3 hours of slowly adding levels around and around. We almost thought it wouldn’t work,  but finally the last block went into place and our snowy home was complete ! It had taken about 5½ hours over 2 days. We were both very happy campers!

After going inside and enjoying the fruits of our labour, it was time to say goodbye to our new Taj Mahal,  and hopefully beat the dark skies that were looming. Although they didn’t eventuate while we were descending, there were some thunderstorms, rain and hail on the drive home. I wonder what is left of the igloo now.

I had a great time camping climbing and constructing with Ken. I think the highlight of the trip (although I always love a great icy peak climb),  was most definitely the igloo. And I’m glad Ken finally realized his dream!