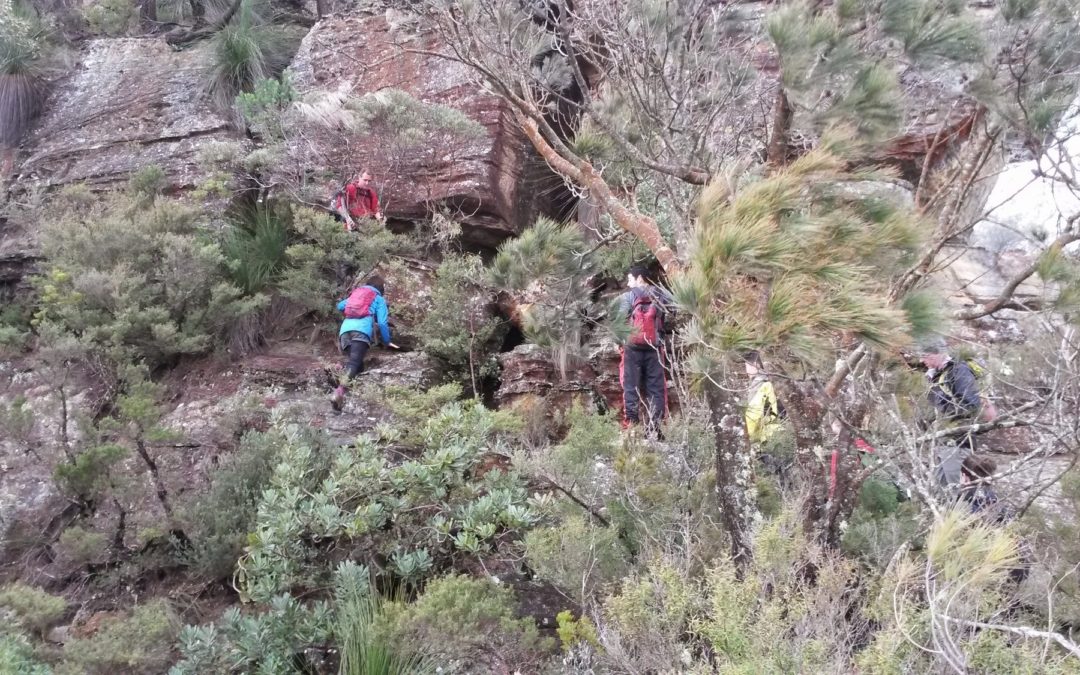 The heavy rain overnight had eased to intermittent drizzle by the time we all assembled at Sublime Point Lookout. Since we had some new club members along on the trip I decided to start with a detour to the Sweet Dreams exit track to get a little bit of scrambling practice in. After everyone had completed that obstacle course without incident, it was a short road bash through the stately gardens of Leura to the Fairmont resort, then down the twisty network of neglected tourist tracks to the top of Gladstone Pass.

The track down Gladstone pass was even muddier than normal, although mercifully the frosty nights seems to be keeping the usually resident leeches at bay. There are several creek crossings on the way down, and a very slippery set of steps carved into the side of a waterfall.

When we reached the big cairn that marks the intersection with Lindeman track, we turned right and made our way along to Dash’s cave to sign the logbook and eat lunch.

The original Lindeman track has pretty much all been destroyed by landslides between Dash’s cave and Sublime Point, instead there is mostly just a well worn footpad. However there were some very steep parts that had become really slippery in the rain, and a handline was used occasionally to help get everyone through.

The most landslide affected areas are now a tangle of fallen trees, ferns and vines, but there are currently pink ribbons marking out a route through that eventually joins up with the original stonework Lindeman track near the nose of Sublime Point Ridge. That however was as far as we followed it, as at the nose we turned up hill and followed Sublime Point Ridge up up up, with several scrambles through the lower cliff line.

Eventually the route up the ridge intersects with the Copeland pass climbers track. There are two ways of reaching that track – descending a 5m gully, or sidling along an exposed ledge with a 1m step-over. With Nik leading the way, there was really only 1 option, so along the ledge we all sidled.

Further up that track there is a slightly exposed 2M scramble which (from past experience with other groups) I was expecting it would take a while to get everyone up. However the rockface appears to have miraculously sprouted spikes very recently. So up we all went in no time at all.

After a few photos at the Sublime Point Lookout, it was time for the pub!

Thanks everyone for making it a fun day out, and also to Xiaohui for the photos. If anyone else wants to email me some pics from the day I will add them to the gallery