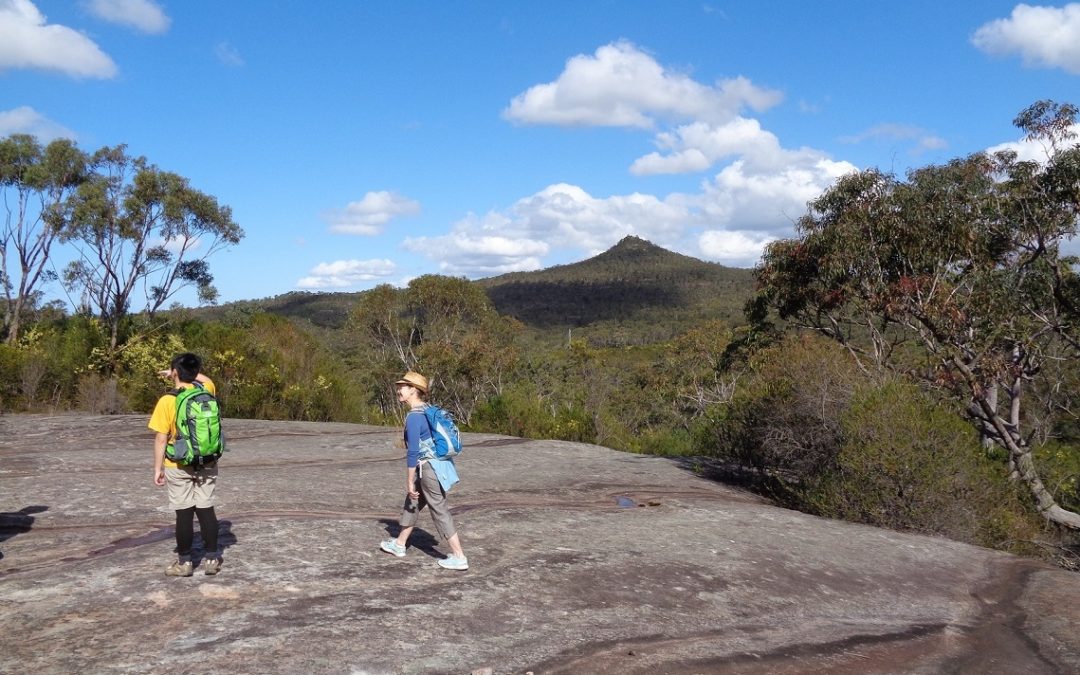 We all met up at Wondabyne Station, cramming all 14 (and a couple of other walkers of a separate group). On arrival Tony asked where the water was, and I showed him Mullet Creek (beside which the railway runs). Tony said, no, where’s the drinking water. But sadly, Wondabyne consists of a station and an old quarry and that’s about it! I advised Tony that he could take on water at Myron Brook about 45 minutes further on. So we all headed straight off up the fairly steep grade above Mullet Creek and on to the fire trail on the ridge which we followed for a fair way until reaching the track leading off to Myron Brook. He we had a group photo.

Then it was off along the rough bush track, which traverses many very large rock slabs which are a feature of the area. We eventually reached Myron Brook, noting the profuse Boronia bushes in purple flower along the way. Here we paused while Tony got his water supply. We didn’t stay too long as it is the one spot on the whole walk where leeches can be a possibility, although no one got any.
So it was over a small rise and down into Kariong Creek were we stopped for morning tea. The advice was not to drink the water here as there is a Scout camp further upstream. After the break we climbed up out of the creek along a second fairly steep grade to eventually reach the fire trail which starts at Staples Lookout and ends up at Patonga. We followed this for a while and reached a track which cut across country across even more larger rock slabs, including one with Aboriginal tool sharpening grooves. This track led us to Tunnel Road (so called because it is directly above Woy Woy Tunnel), and then left off this to the stony track which gradually and then more steeply rises to the base of Mt Wondabyne. We signed the log book along the way.

We the went up the track to the summit of Mt Wondabyne, finding another group there; we left them with it and found a lunch spot sheltered from the cold Sou’westerly wind that blew constantly. It was nice and sunny though, and provided good views over Brisbane Water and Woy Woy, as well as west to the Blue Mountains. Then it was a matter of retracing our steps back to Wondabyne Station, which we reached with very good timing – the tail-end walker reaching the station 5 minutes before the train was due. On the way Tony again refilled his water at Myron Brook, although he said that this time he could taste the forest in it!

When the train pulled in the guard was surprised to find so many people waiting on the platform.

Altogether it was a good 14km walk on a nice day, reasonably sunny except at the end when it got a bit cloudy, and not too warm either. It’s worth mentioning that this is not a walk for summer as it gets very hot and there’s not much shade on the long section from the Patonga track to Mt Wondabyne.

Unfortunately there was one “no show”.