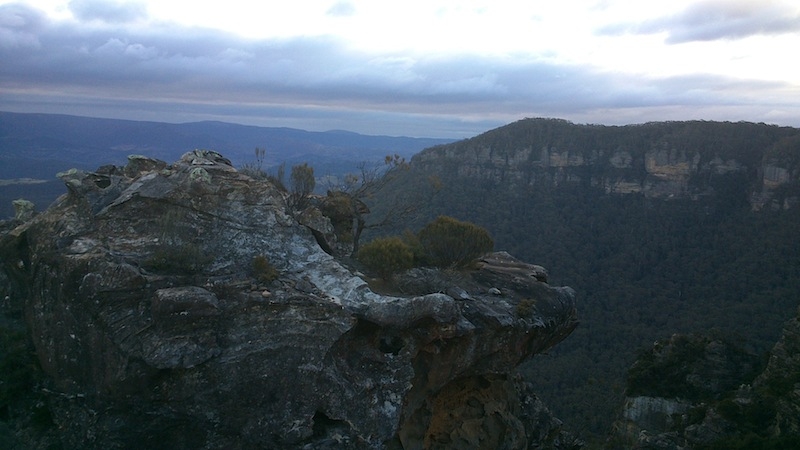 With a full moon looming, I couldn’t resist another night abseil, despite the season. Not surprisingly there was interest from the other keen abseilers that I sounded out to help run the trip, Mon and T2. The call went out and we quickly had a solid turnout of hardy, experienced abseilers keen for some adventure. With a higher risk quotient than normal, I’d decided to cap the numbers at eight, but with such an experienced group it was impossible to whittle it down. 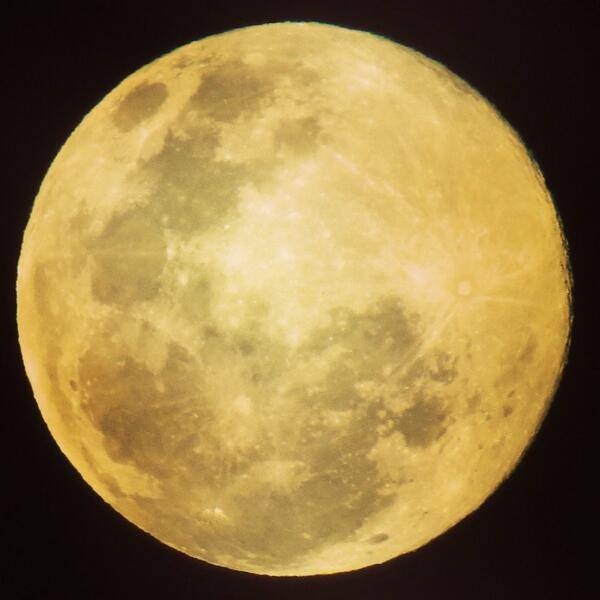 Kristian volunteered to co-lead, so we split out the party into two groups and staggered the start times. The first group would set-up the ropes and the second retrieve them.

After rounding up everyone, we rendezvoused at the lookout above the first abseil to admire the sunset. It was overcast, the wind was howling and it was cold…

After some discussion about the merits of leaving the ropes set-up versus running one big group, we decided to proceed with the original plan and evaluate on-the-go. 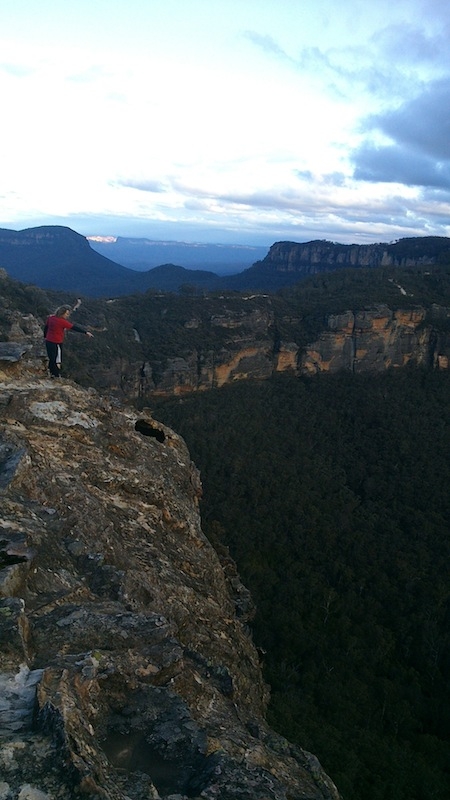 Getting a glimpse of the challenge ahead (photo Jon Urrejola) 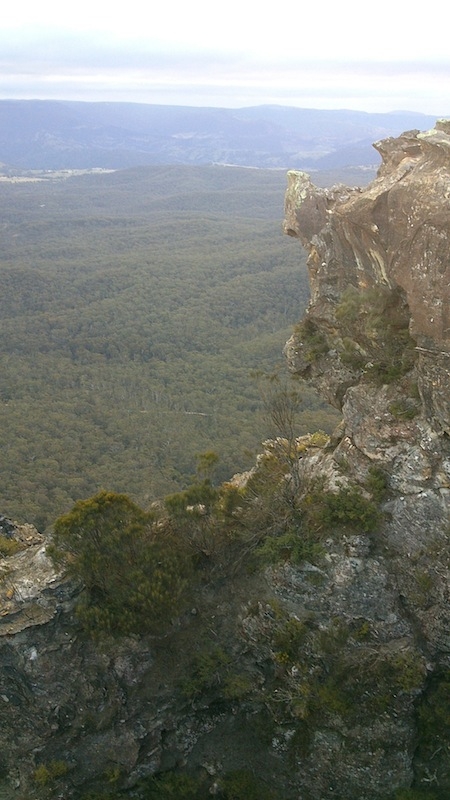 After pulling down the ropes from the last abseil, which Scott chivalrously carried, we scooted up the Devils Hole exit track.

There was some talk about rigging up the Devils Hole chockstone whilst waiting for the second group, however the lure of beer and pizza was far too strong.

The wind had increased and a few of us began to feel pretty uncomfortable. When the rain started, the decision was made: we’d pull out and come back in the morning to do it in better conditions. 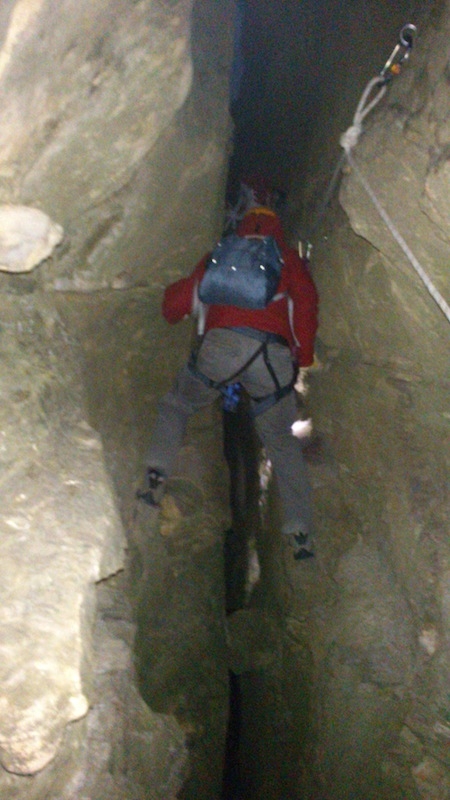 Traversing the slot to the second abseil (photo Jon Urrejola)

We pulled-up the first rope (so that it’d be less easy for someone to pinch them overnight), but just as we’d finished coiling it we realised that it might in fact be a good idea to leave it behind: what if the other group was relying on it to come back up in an emergency?

It was impossible to reset the rope in the wind, so Kristian went down to secure it. Once down, he yelled something to us but we couldn’t make out a single word over the wind! After 15 minutes he prusiked back up with the good news that it was completely sheltered on the first drop and the slot wasn’t bad either. 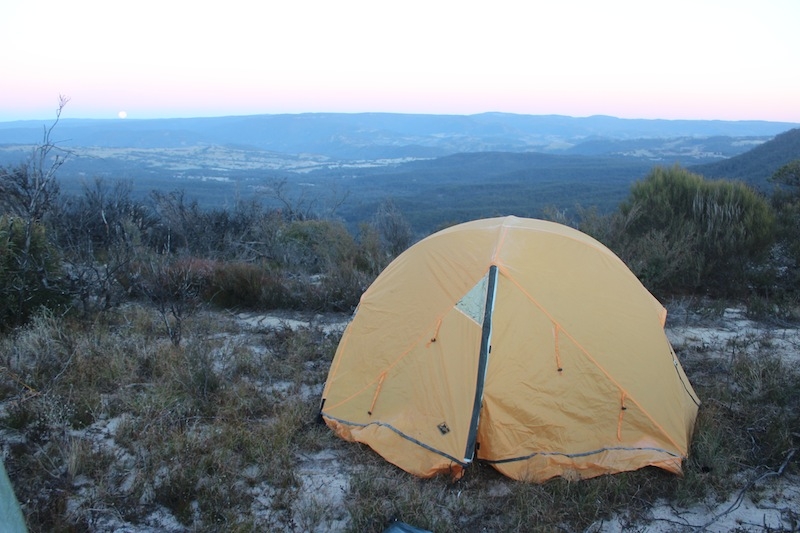 After both groups finished abseiling we met again at the the Station Bar in Katoomba where we thoroughly enjoyed delicious pizza and beer.

It was then off to Narrow Neck where we located an excellent camp site, carousing into the wee hours of the morning.

After a chilly night in sub-zero temperatures, some of us woke up to the best view of the moon all night… 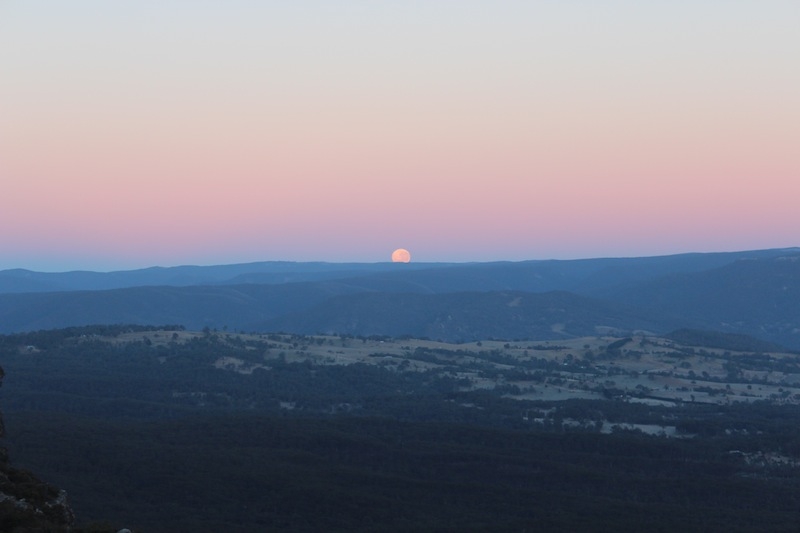 The full moon setting in the west (photo Grant Lclean)

Thanks to Monica, T2 and Kristian with their help in organising the trip.

Note: The biggest thing to note from the trip were the unusual wind dynamics. From the outset we weren’t expecting the conditions to improve much as we progressed down the wall and were surprised to find that there was hardly any wind in the slot. We were careful in appraising it first because other trip leaders have reported difficulties setting up and retrieving ropes in the slot in windy conditions. 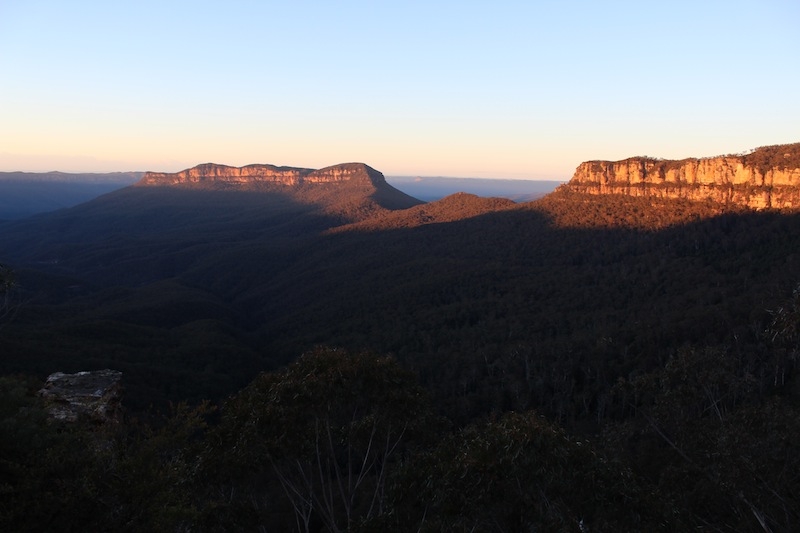 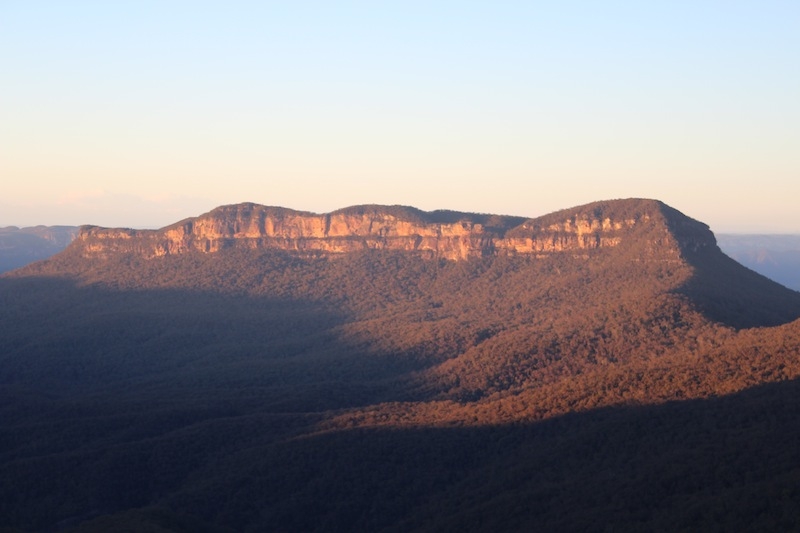