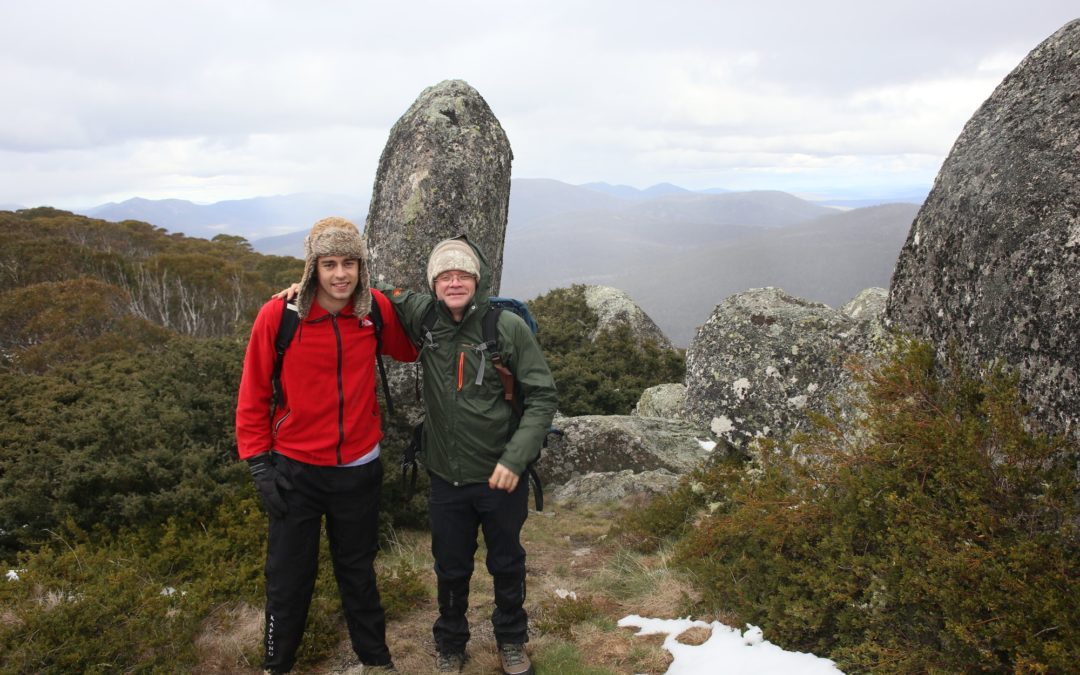 Timing is everything. In this case I had good and bad timing. Bad timing as I posted a trip during exam times, meaning hardly anyone had signed up. But good timing as I planned the trip to coincide with possible snowfall. And it did, as it turned out.

On Friday night 20 June , Michael and Tom met me for the drive to Canberra. I am not famous for getting myself lost but on 2 occasions on this trip I did. This time it was in Croydon Park after getting some fast food on our way. Some artful sat navving from my 2 passengers saw us back on the road. By 11pm we arrived at our car camping site just off the Corin Dam road , not far outside of Canberra.

The stars were out and the night was chilly, so we wasted no time getting into our tents. It got to just above 0C that night.

Next morning a blue sky greeted us, while some telltale cirrus clouds told another story. A change was forecast to arrive about midday. The trail to Mt Gingera via Stockyard spur was easy to locate at the end of the Corin Dam. And it then went straight up for 2 breathless km. At least the music of the lyrebirds, well formed track  and lovely valley views made for good climbing. Michael had already figured he had too much water and left a full bottle to collect on the way back.

An hour later we arrived at the helipad signaling the end of the really steep section. It was still sunny and pretty much t shirt weather. The track then undulated along a ridge line meeting an old 4WD track, for several kilometers to Stockyard gap. There it met the main Mt Franklin Fire trail (an alternative route to Gingera). We could see Mt Gingera looming in front of us, and also the increasing snow clouds gathering about the summit range.  Soon we passed Pryor’s Hut and the site of an old arboretum (botanical collection of trees) . Feral pig damage was also evident. They are a real pest up here and the park rangers had laid some baiting stations to try and deal with the problem.

I opted for us not to stop at the hut, as the weather was changing fast. Better to get up to the summit while we could see something…

As the sky darkened we made the final ascent via a small foot track, to the wonderful summit of 1857m high Mt Gingera. It has granite outcrops and stunted snowgums and a real feeling of wilderness. Some snow lay about the top and was now falling as well. Time for me to change out of that t shirt at last.  You are surrounded by mountains and the gentle bulk of Mt Bimberi lies to the south. All with sweeping views for over 100km in all directions. No wonder I keep coming back! This is the 3rd time I have been up there…

Both Tom and Mike seemed equally impressed. Snow was already falling, and as we ate lunch, you could feel the temperature plummeting. We didn’t spend too long up there, but explored a bit of the summit area, and then began the long descent back. A brief visit to Pryor’s Hut was interesting, where we met some other walkers who had come up a bit late and were not going up the summit. After all, the top was now socked in and the snow was falling steadily. The return walk was through a wet snowfall, which made it much more novel. And the final descent showed us all how long the walk is…that big hill really hurts at the end of a 19km walk, with about 1100m of actual ascent. Gingera is big!

After a quick side trip to the delightful Gibraltar Falls, we returned through Canberra, and I got us lost again. Not for long, but tiredness and too many roundabouts were to blame I think. We made it back to Sydney by 11pm. A big trip? Yes. But worth it? Very much so!

Big thanks to Michael and Tom for coming along and making the walk so worthwhile. Maybe I’ll get a few more sign up for my next trip there??