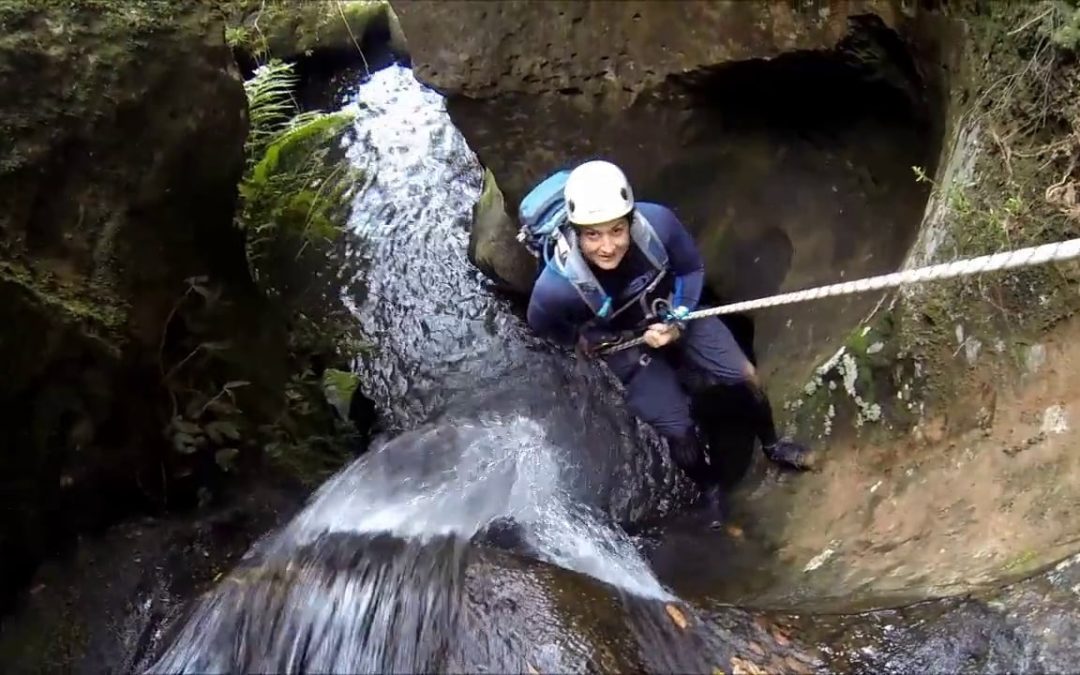 It’s been many years since I’d heard of and driven by Macquarie Pass Rivulet. Over time, more and more stories about the scenery and adventures within the rivulet have convinced me of the need to complete it. Finally I have.

Most canyon purists would not classify this as a canyon and they would be mostly correct. It has been variously described as an abseiling trip, rainforest experience, and an open canyon trip. Whatever you want to call it, it is a fun filled day of adventure, a visual feast of natural beauty, and a good workout to boot.

The great thing about Macquarie Rivulet is that most parts are accessible to people with or without ropes and can be walked in either direction. You can complete either some of it, or all of it. We decided to do it all.

Not long after announcing the trip on SUBW, it was filled and I had to turn a number of people away. Unfortunately, most of the people cancelled at the last minute which did not leave enough time to re-invite those that missed out.

I met Scott at Wollongong train station and we picked up Matt there as well. We then drove the half hour to the bottom of the Pass. After sorting all our equipment, clothing, food, and water supplies, we hopped into one vehicle for the car shuffle to the top of the pass.

The 2km walk in to the first abseil takes about 40 minutes and includes some bush bashing through ferns and scrub and passing outstanding views of the Illawarra (Lake, escarpment, ocean, farmland).

There are two options for the initial descent off the top of the escarpment. A dry abseil off a tree to the left of the first big waterfall or the waterfall itself via the rivulet. We decided to drop down a short waterfall abseil into a canyon like pool, and then drop down the main water fall. Despite being a few days short of winter, the water was cool but quite tolerable in our wet suits. This temperature theme would remain throughout the day on all the water sections. In the alternate dry sections, we had to disrobe at least our tops due to the excess of heat.

No more than a few short steps later, we descended the largest drop of the day which was our third waterfall abseil at around 45m height.

With all the colour variation on the rocks from water, moss, and algae, we quickly discovered that this trip was going to be a very slippery one. No matter how careful we were, we all took turns in taking little tumbles here and there. Scott seemed to enjoy this the most and spent a fair proportion of the day “slip sliding away” on his arse. Lucky I had lots of “natural padding”!

We were now well and truly in rainforest territory and spent quite a bit of time scrambling around rock piles, through mud, and descending down moderate slopes. The trip down the rivulet is around a 600m descent over 4km, and most of this occurs in the top half. The scenery throughout the trip was spectacular, particularly this section. Elk horns were hanging off trees, vines were entwined around each other, moss was growing almost everywhere, birds singing, and water was flowing through magnificent rock formations. Various sections contained quite a bit of debris from recent high rains. We took the opportunity to learn more about each other’s interests and activities. A great way to meet and get to know new people – and potential future adventure buddies.

Matt started wondering about my estimate of number of abseils when we finally came across our fourth. We decided to avoid the dodgy anchor and chock stone which would have taken us through the waterfall and go the safer option of the tree to the right. After hopping past the slight overhang, we dropped in mid-air adjacent to the waterfall. A few jumps into the pool and immersion below the falls and we were on our way rock hopping and swimming down the rivulet. As we meandered through the smaller pools, a few inquisitive small yabbies and gambusia stared at us.

We manufactured our fifth abseil by skirting down another slippery slopy waterfall into a pool. The sixth and seventh abseils we combined into one by setting up both longer ropes down two stages of waterfalls. This one required some nimble footwork and ensuring that Scott’s EDK (Euro Death Knot) was lowered past the catch point at the top of the higher waterfall. The eighth waterfall abseil was a short drop into the start of some true canyon section. Followed by a shorter drop on the ninth abseil into more water.

We carried two static 10mm 60m ropes on this trip as I was unsure of the exact height of all the descents we were to do. I also carried a backup 30m dynamic 8mm rope which I use for short abseils and as a safety line for basic lead climbs and descents. Although not ideal, it’s really handy and saves time. We also had wetsuits, straight through descenders / hydrobots to prevent rope twisting, helmets, cows tails, hardware, and emergency equipment.

Following more meandering around and down this rocky wonderland, we came across the first slide, which can also be jumped, and a second water jump not long afterwards.

Back to abseiling waterfalls with a short 10th descent, and then another long combination 11th and 12th descent into the only section where you have no choice but to get wet. Straight after this was the big water jump adjacent to a falls.

From here the rivulet flattens out quite a bit such that the ropes are no longer required. We got to the well-known and used water slide and high jump rock pool.

We started losing light here. We moved onto the well-worn track on the left side of the rivulet and walked back towards the car park. Scott and I quite enjoyed walking with minimal light and Matt elected to get his head torch out to guide his path towards home. We passed the gallery, got to the cars, dropped all our gear off, and changed out of our wet clothes. We retrieved the first car and then headed back to North Wollongong Pub for a well-earned Pale Ale or two and a juicy steak dinner.

This was a fantastic day and I thoroughly recommend Macquarie Pass Rivulet to anyone wanting a fun filled day of adventure. I will be back again many times, including another SUBW trip later in the year.