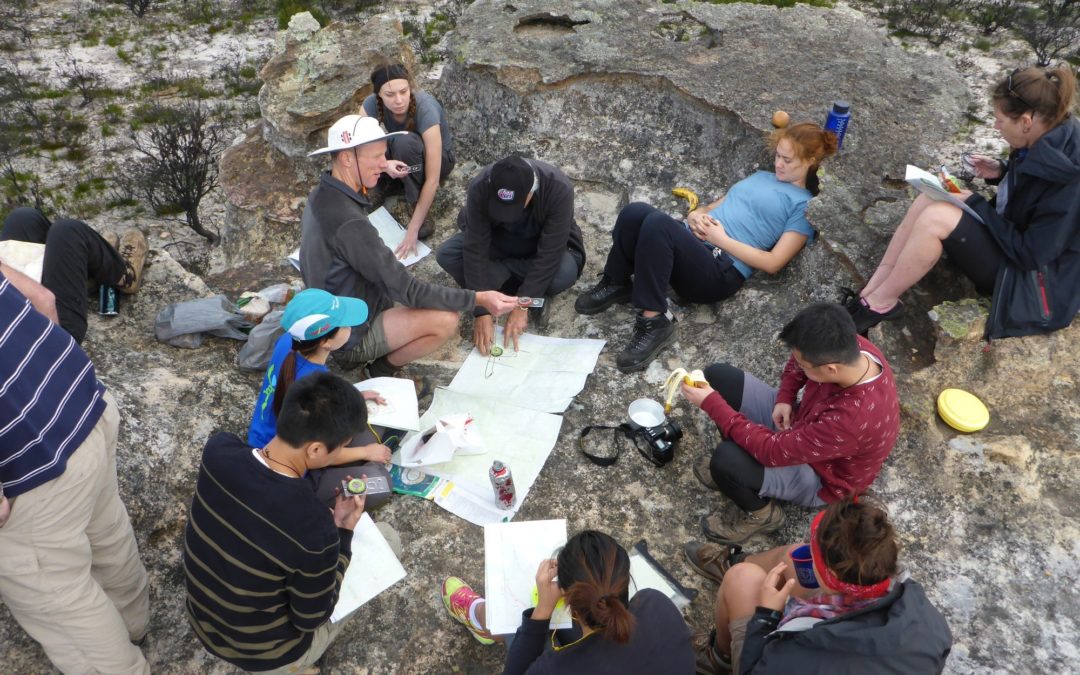 From the moment the trip went up on the walks programme a few weeks ago, interest in this trip was huge. 35 people had signed up for this trip before I marked the trip as full and more people emailed me after that wanting to be added to the waiting list. The limit is really around 20. Unfortunately in the final day before the trip many people decided to pull out. So in the end, a party of 14 assembled at Bell station on Saturday morning, enjoying the unseasonally warm and dry weather for the time of year. There we sorted out gear, repacked bags, and  got ready for the weekend.

Before setting off, I ran through the basics of map reading with everyone. As well as looking over maps of the Wollangambe and other parts of NSW, the group got to see maps of Switzerland which are so detailed and so beautifully toned that the geographic features depicted almost stand out in 3D, making it as easy as a picture book to read and see what the contour lines represent. And when Jemma asked how to tell whether a closed loop is a hill or a depression, what better way to show it than with a topographic map of the limestone karst country of Papua New Guinea!

Armed with maps, compasses and some knowledge of contour lines, we headed north from Bell and into country that was burnt in last year’s Lithgow Mines fire. We stopped often to inspect maps and deduce our location just by looking at the contours and remembering what we had passed through. In this way we eventually reached spot height 994 with its panoramic views of the surrounding area. Here we had an early lunch and began to learn how to use the compass to take bearings and identify surrounding features on the map. A course was set for our afternoon’s walk, the challenge was set to reach a junction of two fire trails with pinpoint accuracy. There was a short steep descent into the Wollangambe, a river crossing and a steep climb out the other side. People took turns to lead, following the compass whilst at the same time following a ridge, using the natural lie of the land to stay on track. The country was slowly recovering from fire, black spikes protuded from the ground and these impaled even thick soled shoes. And some pungent smelling shrubs were making a comeback, so sweet and exotic was the smell of these plants we wondered about adding some to our tea. The fire had revealed much in the landscape, exposing bare rock that had flaked in the heat, gnarled and blackened stumps, seed pods that had opened in the heat, everywhere the remains of what had perished and at the same time the fresh and verdant growth of new life, the bush coming back.

We made good time following bearings through the blackened scrub to arrive at the fire trails, successfully hitting the road junction with pinpoint accuracy. It was now time to reveal the location of our campsite and the team had to work out the best way to get there and what bearings to take. The consensus was to head along the fire trail and then turn off at a certain point and stay on a compass bearing. Eliza amazingly walked the fire trail and the scrub barefoot from then on, and didn’t even scratch her feet until we reached the cutting grass swamp …. her first contact with this species of Australian grass was a slightly bloody one … but nothing that a band aid or two couldn’t fix.

By now we were very close to our camp site, a complex labyrinth of sandstone with a little canyon nearby, but we got there only to find that another party of walkers had occupied the huge cavern where we wanted to camp. This wasn’t a problem as the weather was so dry and mild, we camped outside by a tiny little stream. Tents went up, and the gathering of firewood was a simple process. Just on dark Roger Lembit came and joined us, he was out in the area doing field work. So it was a party of 15 SUBWarians that enjoyed the campfire that night. Stars were out on a moonless sky, framed by the stark and severe forms of burnt branches softened only by the modest beginnings of regrowth of what will be once more and in time, a new forest canopy.

Some of us were up early next morning, Anna needed to get back to Sydney by lunch time so I took her some of the way back towards Bell, then returned to camp to where everyone else was having breakfast. After brekkie and multiple cups of tea in the morning sunshine it was time to head off. We wandered through the great cavern which had now been vacated by its occupants, we had to do some remedial work to remove a fire ring and fire scar that had been made in the “wrong” spot. We crossed a swamp and made our way through some cliffs and emerged on a vantage point from where we could see yesterday’s lunch spot in one direction and last night’s campsite in the other. This was the perfect place to practise the technique of a 2 point resection. With that done we could set bearings for the Wollangambe and set off once more.

Good progress was made and we reached a high vantage point with fantastic views and plenty of time to spare for an early lunch. We lingered here despite the alpine wind blowing in from the west. From here it was a short afternoon walk back to Bell. We didn’t want the weekend to end yet and so we adjourned to a pie shop on the Bells Line of Road . There we sat out on the lawn in the afternoon sun and ate our pies and chatted before finally parting company. Some walked away still with their compasses around their neck.