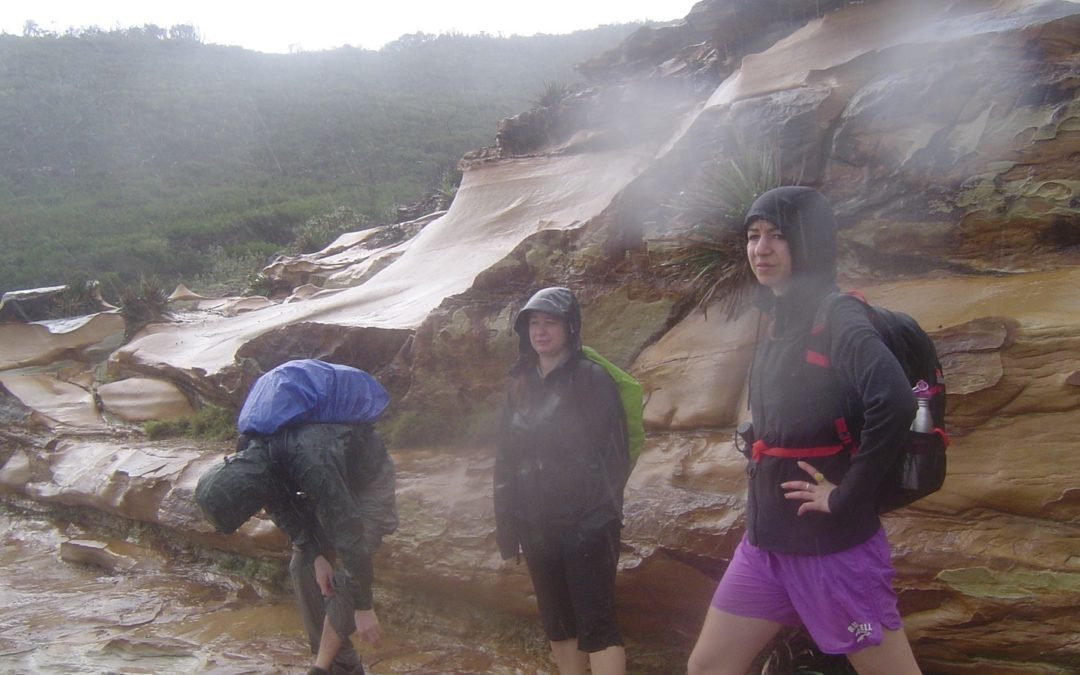 Sunday morning dawned with a clear sky on the Central Coast, but it wasn’t to last. By the time we arrived at Woy Woy Station around 10am the rain was teeming down. Nevertheless it was “press on regardless”, as Martin, Marta and myself set off for the start of the walk above McMasters Beach where Ali was waiting. A car shuffle was not needed as Ali’s mother kindly offered to collect us all at Kilcare at the end of the walk to return us to McMasters.

So off we went in the rain towards the first beach along the way – Little Beach – in our rain covers and umbrella! The track was not as muddy underfoot as would be expected in the rain, and some stretches were of white sand anyway. At Little Beach we encountered another walking group taking shelter from the rain. In fact the rain didn’t seem to deter other walkers as we encountered three other groups on this walk. After Little Beach we followed the Coastal Track which goes up and down a few small vales across rills, somewhat similar to what you find on the Royal NP Coastal Walk. The wooden steps along the way became like little weirs holding puddles of water at each step. We also detected a couple of leeches – unusual for this walk.

Eventually we arrived at Maitland Bay Beach just as a larger group were departing, enabling us to stop for lunch in the only place where there was shelter from the rain. A break in the rain enabled us to do some rock-hopping along to the remains of the wreck of the S.S. Maitland, which ran aground there in 1898. It was noted that the boiler jacket, still in one piece on the walk a year ago, had now broken in two and was nowhere near the size it once was, and also recent seas had washed it further into the rocks. My guess is that in 10 years time almost all traces will have vanished.

After getting back to our packs I discovered that a raven had tried to steal my lunch box out of my pack as it was lying a couple of metres away partly opened. Two ravens had been noted hanging around earlier while we had lunch. No penguins at Maitland Bay today though – they have been seen there on past trips.

Then we set off towards Putty Beach along the Coast track which at a couple of places provides viewing points for whale watching. No whales today, and even if there were it was not possible to see very far to sea due to the rain and mist. We eventually reached Putty Beach and commenced the 2km walk to the Kilcare Beach surf club. Along the way we encountered a group of Crested Terns, who didn’t seem too concerned at our presence.

At the club house we were able to take off our wet gear and I had a nice coffee, and Ali’s mother arrived to take us back to the start of the walk to pick up our cars. Martin drove directly home, while I dropped Marta at Woy Woy Station, just missing the 3pm train but there was another in 20 minutes so it wasn’t so bad. Noted that the surf patrol was still on the beach but there were no takers for a swim.

It was a good walk in not very good weather, but even so the mist and rain gave the walk an atmosphere that is missing on a sunny day.
Thanks to the walkers who persisted on the trip on a rather damp day.