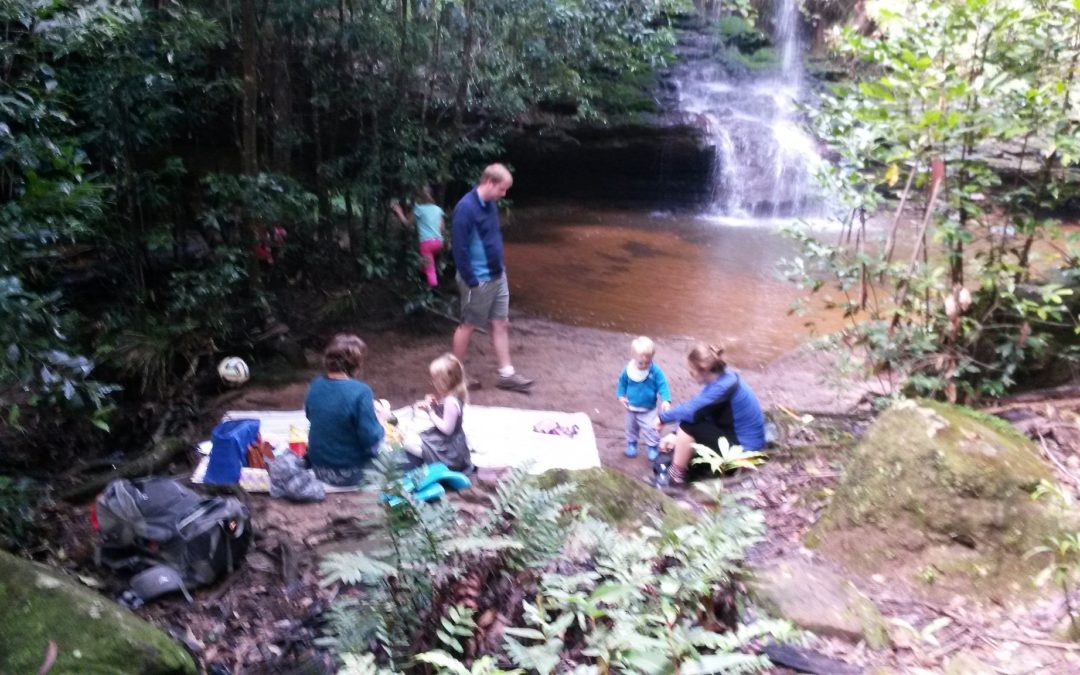 So today a total of 4 adults and 7 children (the oldest of which was 8 years old) met up at the North Lawson park and headed off on the Empire Pass track.

There had been a classic Blue Mountains drizzle earlier in the morning, which had stopped by the time we started walking but there was still plenty of grey clouds and the surrounding bush was full of glistening drops on leaves. Different parts of the Empire Pass track are in various states of repair, I suspect in part because some of it is within the Blue Mountains National Park (and thus maintained by the NSW Parks & Wildlife Service) whereas other bits are managed by the Blue Mountains City Council. In any event, the track down to Dantes Glen was easy enough for all participants. We admired the waterfall there briefly, then decided to continue on a bit to St Michaels Falls.

This required three rock hopping creek crossings. Surprisingly, everyone stayed dry all the way to St Michaels Falls, where we spread some rugs and ate lunch.

Afterwards, some of the kids clambered around and over big mossy boulders while the David taught the others to skip rocks across the pool surface. Some wading occurred as well.

Eventually, the Lee family continued on to do the full Empire Pass loop, including the real Echo Point and the newly renamed Duck Rock. Sophie and I decided not to chance the weather and herded our motley crew back the way we came. When we reached the grassy flat where the cars were parked, the boys played soccer and the girls played hide and seek till finally it was time to head for home.