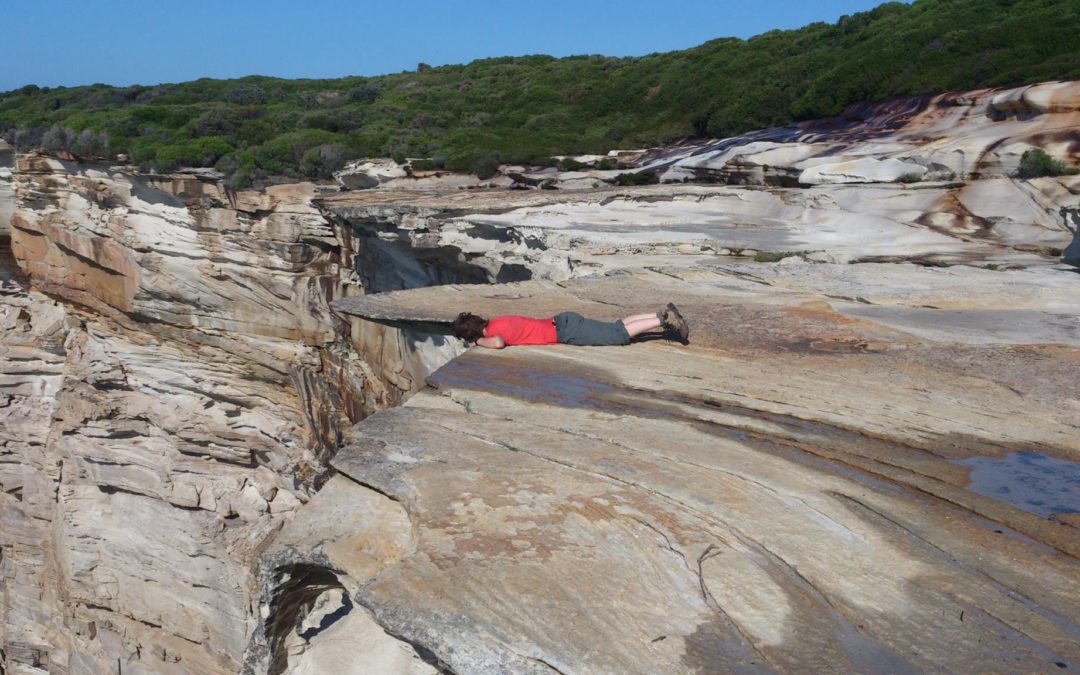 We all managed to get off 9:30 train at Otford and sorted out gear which Tony had kindly picked up and brought from the club locker. Starting our ascent of the hill out of Otford, Alex asked if it was going to be like this the whole way. I reassured him that it wasn’t but started to get worried myself, I always forget just how long you have to go uphill at the start of this track.

Heading down through the jungle to Burning Palms, Tony was eating an apple, and then produced another apple when we stopped for morning tea. A joke about how many apples he had led to the revelation that he had brought a 2 kilo bag as his major food source for the trip. 8 apples a day may just be the most healthful bushwalk ever.

My magical leech removal potion (Dettol hand sanitizer) was used a few times. We followed the undulating hills through Burning Palms and South Era without incident. Unafraid of rockfall, we took the old route around the base of the cliffs between North Era and Garie rather than walk over the headland.

A little tired from our heavy packs we settled in for a nice swim and relaxing afternoon. A few leeches tried to disturb our dinner and were summarily roasted. Alex cooked on the club Trangia stove, and then decided its rather yellow flame would be great for the packet of marshmallows he’d brought. Patrick declared this to be a totally original innovation in bush cooking, but I suspect it wasn’t. As usual I forgot to bring a headtorch and went to bed rather early while others played cards. Also mugs, plates. Apparently packing lists are a good thing.

Jemma and Alex shared a tent owing to the lack of space and inconvenience of erecting another one….. or was that the real reason?? (Them that do not write the trip report must expect to be maligned).

Alex and Jemma also rose at 6am on Sunday to try and watch the sun rise over the sea, only to be confronted by thick cloud – the only cloud of an otherwise warm and sunny trip.

The creeks at Curracurong were all flowing well and as beautiful as they ever could be. Our photographer Alex was worked into a lather and started climbing around rather dangerously to get better shots.

Lunch was at the north end of Big Marley after a swim in the wild waves. Luke seemed to have jarred his knee the day before, in an ever so slight slip on a wet metal boardwalk. He was walking with a bandage on but still found it uncomfortable starting and stopping, so he left to make post haste to Bundeena with no more photography stops. Patrick left soon after just to get a head start on the young’uns, a head start he inadvertently retained all the way back.

On the plateau north of Marley the trip leader’s behaviour became increasingly erratic, a lot of zigzagging across rocks and peering earnestly over cliff faces. Finally, a little past the track turning inland to Bundeena, I found what I was looking for – a rusted metal pole sticking out of a cliff. It marks an airy cave with sandstone walls built under a natural overhang.

I’d visited the cave once before but I don’t know much about it. The net turns up a few suggestions that it’s a hermit cave from the Depression.

After more photos we tackled the final rather hot section through the sand paths and then the streets of Bundeena. After tracking down our companions we filled the 40 minutes to the ferry with icecream, chocolate milk, and soft drinks. Everyone had a great need to take their wet shoes off – not mentioned earlier was that much of the route was quite muddy, something I didn’t expect as all my memories of it are hot and dry. The plus side was all the water in the creeks, and we didn’t actually get rained on once.

Overall it was a good trip, I was worried about leading my first trip – what if the people all smell or we get lost, etc, but everyone was great. Luke went to the physio and was diagnosed with a misaligned knee cap, which sounds bad but actually just needed some tape and ice and he’s pretty much better.