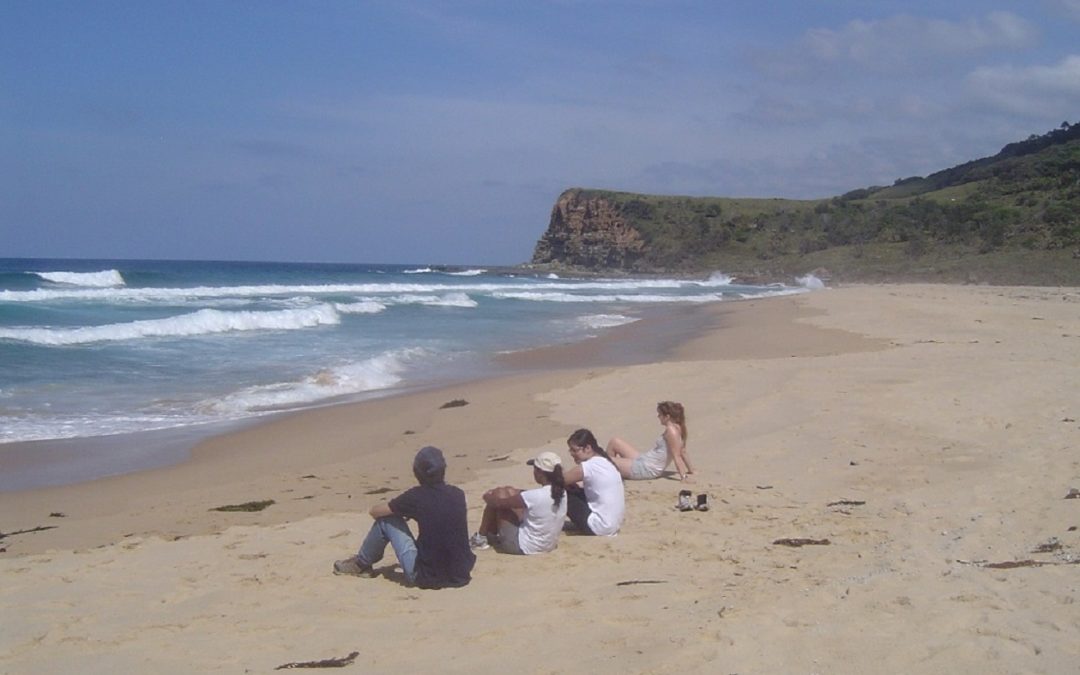 With the destination of the walk altered from the Blue Mountains due to trackwork, 11 of us found each other at Central and bundled on to the train for the hour-long trip to Otford. The climb up from Otford to the Pie Shop is the steepest part of the whole walk and it was good to get it over with right at the start. From there on it was just a matter of following the well-trodden Coastal Walk from Otford Lookout to Burning Palms Beach. Along the way there were opportunities for great views of the sea and the Illawarra Escarpment.

We dropped down through the Palm Jungle, through the Lomandra with the path passing through a WW1-like trench, and then to the south end of the Beach. We found a work rough track and followed it, only to find a sign at the beach end asking not to use it due to regeneration! Maybe a good idea for NPWS to put a sign at both ends of this short track!

We got to the beach in good time and had a long lunch, with some people paddling in the surf (although no-one went for a swim). Two certain young ladies made two little sand castles which could be interpreted as little round hills topped by a little plant, or maybe something else…. See the photo and judge for yourself. Another thing that was found on the beach was a coconut that had floated ashore – quite unusual for this far south. Also unusual was that no one had acquired any leeches while passing through Palm Jungle.

After lunch we headed straight up the Escarpment via the track which leads from the beach to Garawarra Farm car park. Along the way a Wallaby was spotted grazing in the scrub. From the car park we followed the Burgh Track which eventually ends up at Helensburgh. We paused where it crossed Lady Wakehurst Drive as 4 of the group had fallen 3-4 minutes behind, which I thought was odd as it was on a down grade. A toilet stop? No, you guessed it – they had stopped to check for leeches! After giving my customary advice as to the easiest way to acquire leeches (by stopping to check for them), we continued along the short section to the Hacking River crossing. This time it was quite easy, as the river was at its normal level. After crossing it we continued along the track, which requires careful navigating for about 200m as it is quite vague at this point. But we found the sign which pointed to Helensburgh and the more obvious track which goes uphill some distance to reach a fire trail. After more advice not to linger at this track junction to check for leeches, as there were others waiting to hop on (and this time I could see them!) we continued along this fire trail which climbs to the ridge above Helensburgh before reaching the Helensburgh Garbage tip. At this point we experienced the only rain in the form of a very fine and very short shower from an almost cloudless sky. After skirting the Tip along a rather rough track, we came to the service road behind the houses on Gardner Place. Then it was on to a short steepish rough track which led straight to the Station.

On reaching the Station we had the alternative of catching the next train which was due in about 5 minutes, or taking a look at Metropolitan Tunnel and then getting the train after. Philippa elected to catch the next train as she was tiring and had also run out of water.

So after saying goodbye to Philippa we walked on to the entrance of Metropolitan Tunnel, which is one of the 7 original tunnels on the Illawarra Line abandoned in 1915 when the line was realigned. Before we entered I asked that no loud ghost noises be made while in the tunnel (the glow worms don’t like it – and it also spoils the ambiance). So we made our way in with the help of torches and after maybe 80-100m in turned off torches to enable our eyes to get used to the darkness. Soon more and more glow worms started to appear in the gloom, and also the curve of the roof was more apparent as it disappeared further along (the tunnel is 600m long).

After enjoying the Glow worms (which Amanda declared were “cool”), we retraced our steps, and then crossed the road to enter Helensburgh Tunnel, a much shorter and – due to once having been used to grow mushrooms – has no glow-worms. After having a good look around we returned to the Station to await the next train home. Feet inspection revealed that no-one appeared to have acquired leeches!

It was a good walk appreciated by all, and in good weather. The forecast storm did not eventuate. It was also a good experience for some new club members, who learned about leeches, and Andrew also learned that Glow worms don’t like loud Coo-ee noises as well as ghost noises in tunnels!

A pity about the no-shows, although given the change of destination I will give them the benefit of the doubt – this time.