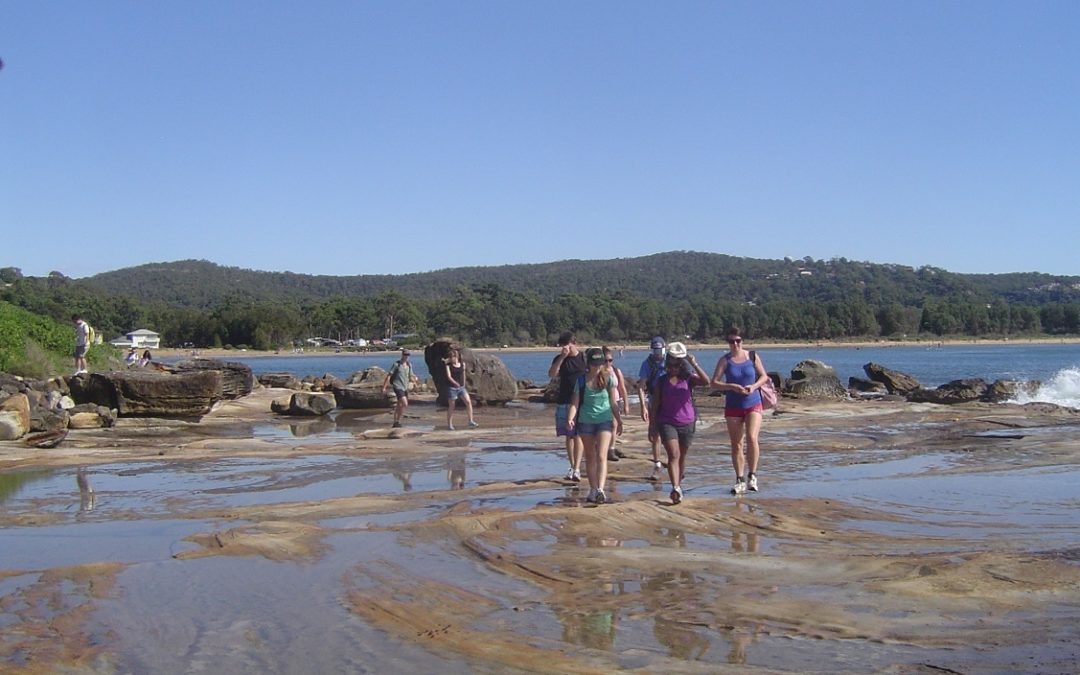 Tom and myself arrived at Woy Woy station to collect the walkers who had indicated they were coming up on the train at 9.25am. One potential walker missed the train, and so did Jemma, who decided to catch the next one and get to Pearl Beach by taxi. That left 10 people coming off the train, with Angelo appearing to be a “no show”, or so we thought. Tom and I managed to cram all 12 of us into our two cars, which made for a squashy but short (less that 10 min) drive to Umina Beach, so it wasn’t so bad. On arrival we went to the kiosk to await Romina who had earlier advised me she was being dropped off there by a friend. I texted Romina to find out how close she was, only to have Angelo return the call! He said that he and Romina was almost there. It appears that something had got lost in translation about everyone meeting up at Woy Woy station. Angelo was apologetic about the mix up.

Anyway, we then set off south along Umina Beach, past a surf carnival that was just starting, and found that because of the previous day’s storm, Ettalong Creek was up (normally just an isolated lagoon) which required a creek crossing. Then it was round the headland of Mt Ettalong and as the tide was up it required a fair amount of boulder-hopping until we reached the flat rock platform. From there it was a short scramble up to the old road which is now an unofficial walking track to Pearl Beach – unofficial because Gosford Council has put warning signs on the track about falling rocks and suggesting people don’t use it! Then it was another clamber down to the northern end of Pearl Beach and we walked the length of the beach. It was already becoming a very warm day.

After a water break in the shade we the did a shortish street bash to the Crommelin Native Arboretum (which is also next door to a Sydney University research station). After a circuit of the Arboretum we sat down for a morning tea break, and Nina offered a plum to a Butcher Bird which had landed beside us expecting some treats. Before this bird could get the plum, a Kookaburra swooped down and snatched it away! Before long two more Kookaburras had arrived and encircled us, hoping for more handouts. But it was bad luck Kookaburras as we then left to go along the track up the hill to Warrah Lookout.

The track to Warrah is under dappled shade which gave some relief from the sun. Even so, I checked the rain radar and was dismayed to note a storm was crossing the Blue Mountains and was probably only an hour away from us (probably also pelting down at that moment on Sierra Classen’s trip). So after enjoying the view at Warrah lookout, we picked up our pace for the mainly down hill section to Patonga. Just short of Patonga the rain radar wasn’t needed as the dark clouds became obvious as did the sound of thunder. We had just reached the northern end of Patonga when a strong wind suddenly came up, dropping the temperature from 30c to 20c in about a minute, and then the rain started. We made a dash for a tree on the beachfront which gave us some shelter, and some donned raincover and put up umbrellas. Tom noticed that a nearby dinghy was dragging its anchor and two guys were having trouble stopping it from drifting into the bay. Tom stripped down to his boardshorts and went out to help the guys bring the boat back to shore. Our good deed for the day! When the rain eased off a bit we made a dash for the shops and waited under cover surrounded by seafood diners eating on the footpath. I texted Jemma to see if she had made it there. Indeed she had, and also had found a shelter shed where we could have lunch. So it was off to the shelter shed to have lunch and wait out the storm, which passed in less than an hour. Meanwhile some of us got coffee at the Fish restaurant/café. After the storm passed, a check of the radar showed that we had no more rain approaching us so we started on the return trip the same way we had come (what did we do in the days before weather radar?!!). With Jemma present our number had increased to 15. We stopped by Warrah Lookout again in case the storm had brewed up some waterspouts at sea, but no luck. On the track back down to Pearl Beach, Paul found some mushrooms but declared them non-edible. On arrival at Pearl Beach swimming was out of the question as the sea had turned very rough – unusual for Pearl Beach. But at least the tide was out making the return passage along the rock platform fairly safe. Then it was the final creek crossing at the south end of Umina Beach, and most decided to see if it were possible to leap over it – most did. Then it was back to the cars, with the drive back to Woy Woy not so squashy with the addition of Angelo’s car, and all made it to the 4.23pm train back to Sydney. This was an enjoyable day, made more interesting with the storm, and was a good learning experience for some brand new members.