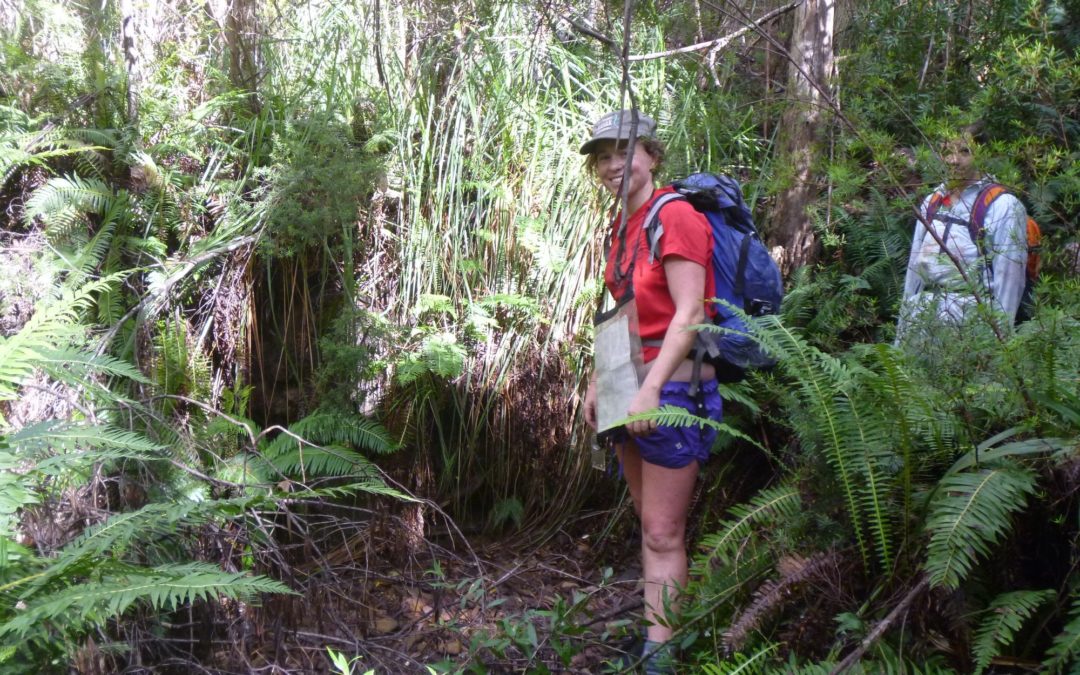 I had forgotten how beautiful Upper Bowens Creek South was until I did it again in mid-January with a Scouts party. The clambouring in the main canyon section required some level of nerve and skill, and I thought it would be excellent for beginners if simplified. I wished to eliminate the car turnaround on Bells Line of Road (not undangerous) and the 2 or 3 abseils (which are pretty ordinary). T2 advised he had a few weeks earlier followed the ridges out to about 540847 (on the Mt Wilson topo map) then dropped east into the gully, but encountered thick scrub.

We parked at the locked gate 1km down the Mt Wilson Road from Bells Line of Road (534854) and walked immediately south down the gully that forms the headwaters of Bowens Creek. It was muddy, but a very even descent through reasonable vegetation. There were no recent signs of passage, though we found black plastic and twin polythene piping – remnants of old marijuana plantations. (Some can also be found, complete with chicken wire, on the traditional entrance off Bells Line of Road). 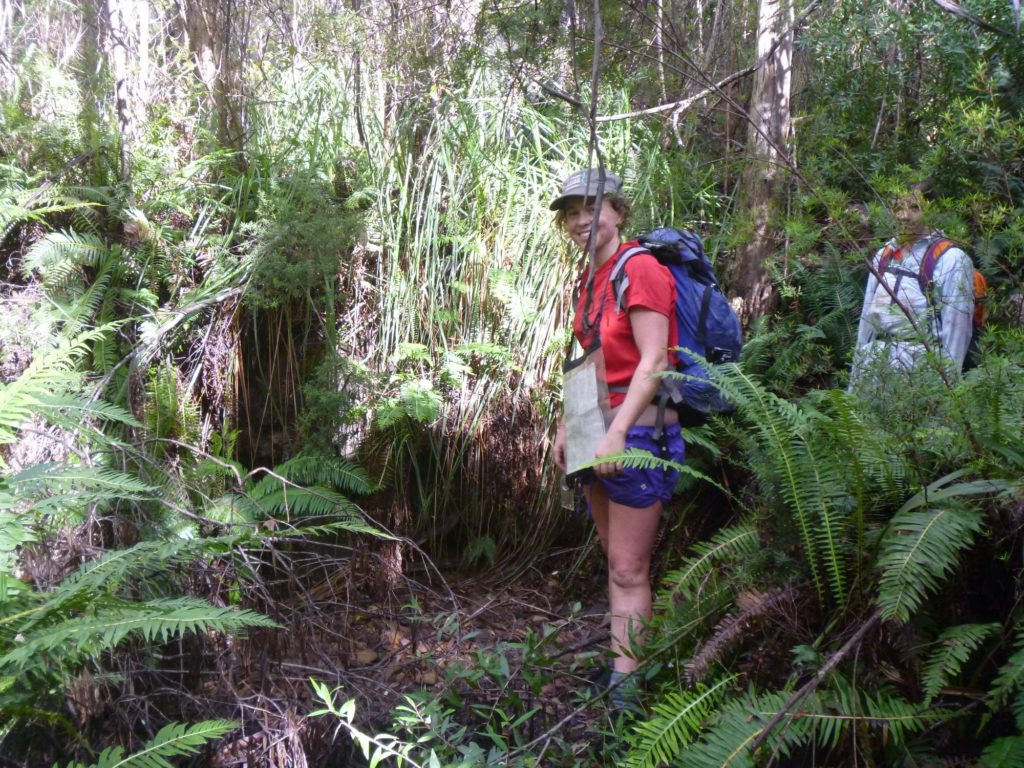 Soon the gully levelled out to creek. Helen and Kimberly are still smiling, despite the scrub

Soon the gully levelled out to a creek, eroded into the valley floor. Before long it became the delightful Corkscrew Canyon. Plenty of water, but the canyon had not been flushed out for a while. This must have been to the liking of the yabbies, as we later saw some massive specimens.

An hour after leaving the car we suited up for our first deep wade, and later encountered many footprints (which appeared to be fresh, likely from a party the previous day) and passed over the raised pile of rockfall where the creek disappears.

Two hours after leaving the car we reached the bottom abseil of the traditional Upper Bowens Creek South route (546845). 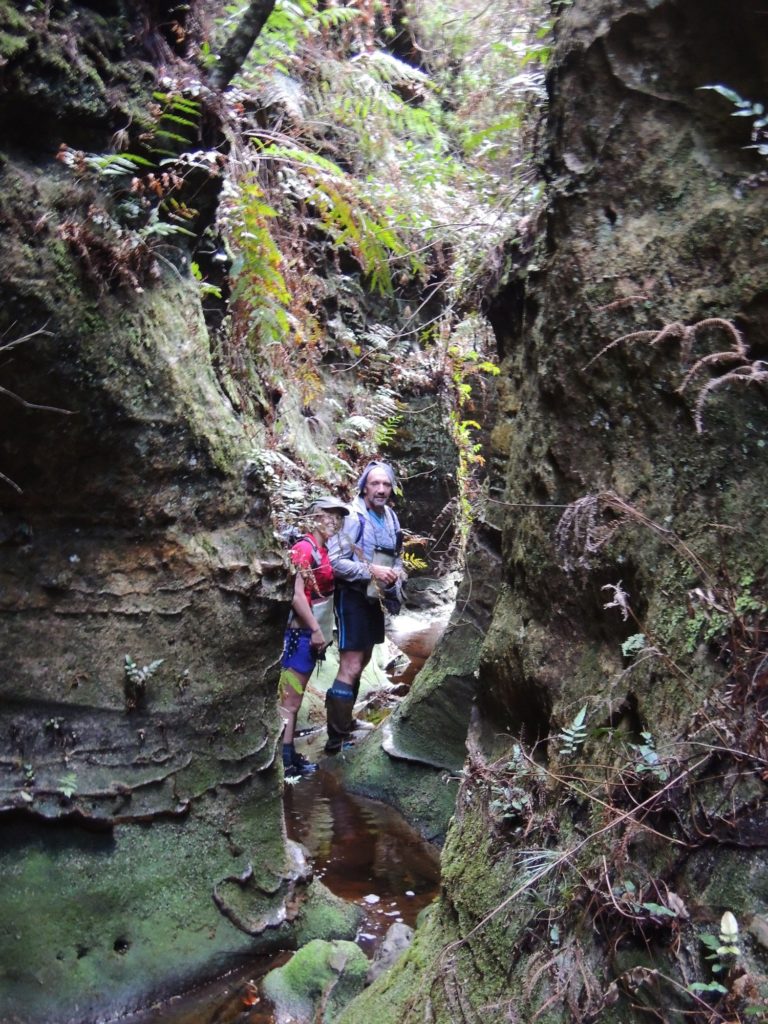 Adrian and Helen early on in Corkscrew Canyon, before we suited up

Helen and Kimberly below the third abseil in Upper Bowens Creek South, where most people enter the canyon

We passed the entrance of Hand Over Hand Canyon (550848) and had an early lunch in the coachwood forest, sheltered from the rain by the overhung cliffs.

Then came the main canyon section, made even more gloomy by the overcast skies and thunder. It starts with a choice of climbs into the bowels.

At a challenge involving a water jump, we each took different routes – the clambour along the left wall avoiding the swim by jumping into shallow water, the direct jump into the dark pool, and the easiest route to the right of the large boulder but still involving a swim.

A slide down a log was managed with various degrees of elegancy.

The dark sky did not encourage the normally recommended side trip up Hobnail Canyon (Range Creek 885851).

We passed Ferny Cave Creek and all too soon reached our planned exit tributary on the left at 557854. We dropped packs and intended to make our way downstream to view the traditional exit.

At a jump we turned back, as without leaving a handline in place, and with our party limitations (broken shoulder, vertically challenged, and horizontally not challenged) we were not confident of being able to retrace our steps. 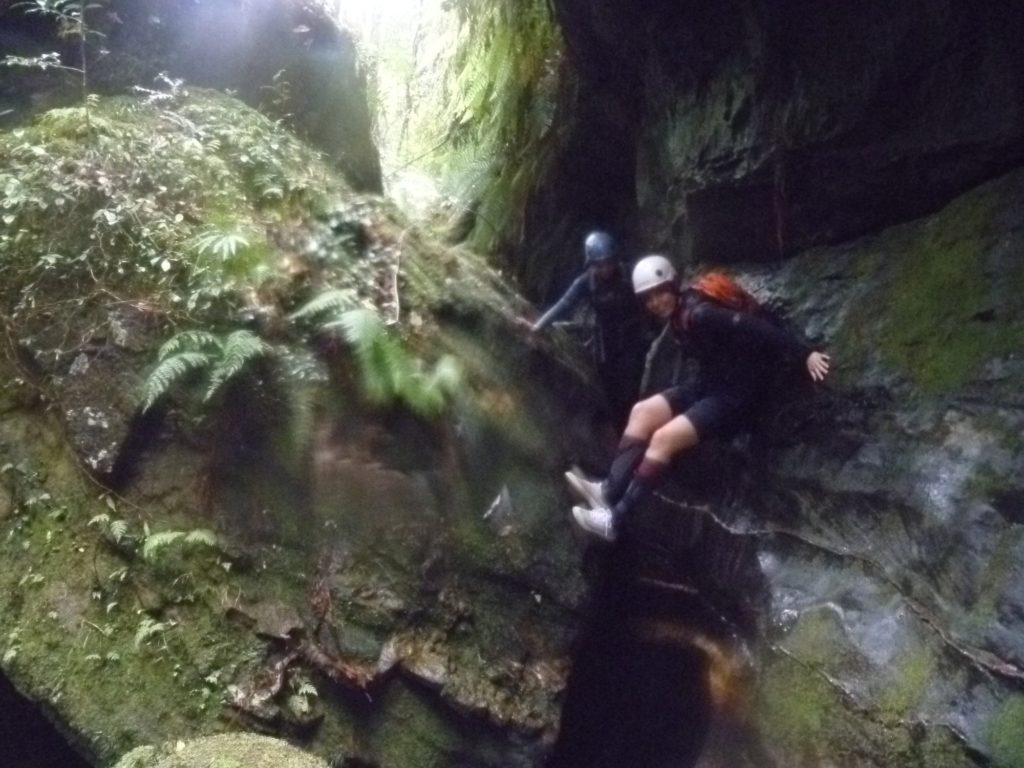 Clambouring in the main canyon section. The overcast sky made most of the canyon too dark for photography, and this photographer has not worked out how to keep the lens moisture free!

The exit up our flowing side creek involved a huffing and puffing up the left through fallen debris. We contoured back into the creek until we hit an impassable waterfall, then following the cliffline left (south), meandering up various levels of rock and a short stretch of thick scrub to break out to the power poles at 555856.

We followed along the power line service trail, reaching the car by mid-afternoon under now clear skies. It gave us enough time to visit Peter and Linda Raines in Mt Wilson, and collect a few chestnuts. 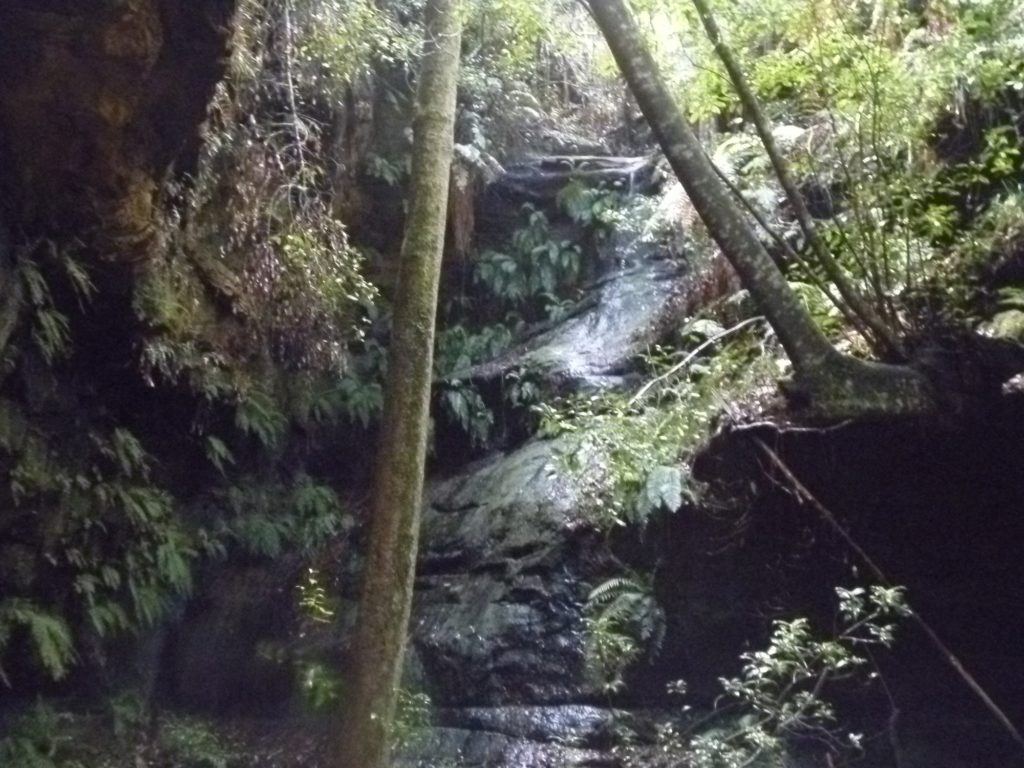 The air was crystal clear as we drove back along Bells Line of Road, and the stunning views over the Gross Valley and magnificent cloud formations reaffirmed what a brilliant day it had been.

It is surprising that this entrance to Corkscrew and Upper Bowen Creek South Canyons is not used more often, but I will be using it again. 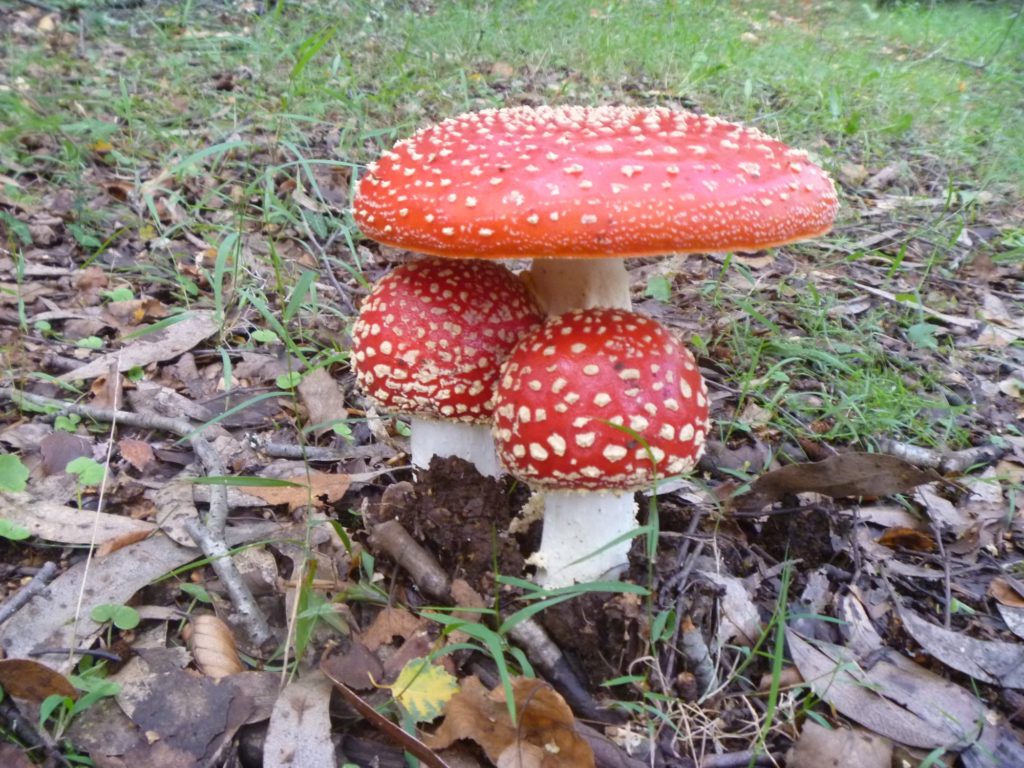 Amanita muscaria, also called the fly agaric or fly amanita, is a mushroom associated with the deciduous and coniferous trees in the gardens in Mt Wilson village.