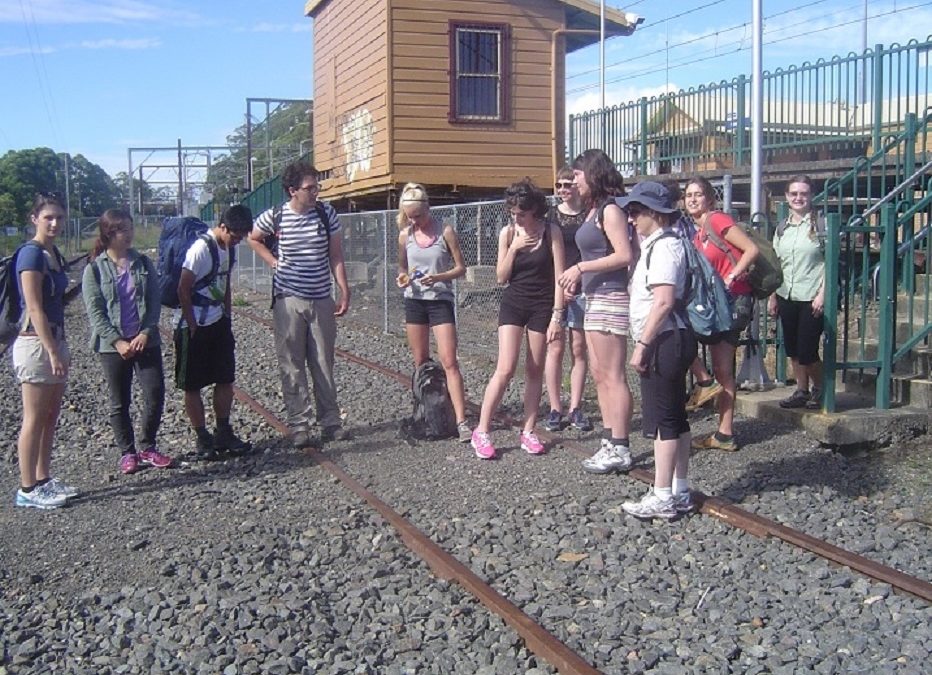 14 of us met up at Cowan Station for the walk along part of the Great North Walk to Brooklyn Tim having driven up on his scooter). Unfortunately a couple of people missed the train at Central as they relied on their transport app to find the departure platform; the app was wrong! (More about transport apps later). But two people were simply “no-show”, and even now I still haven’t found out from them why they didn’t show (more about “no-shows” later also).

Anyway we set off on the walk, crossing over the freeway and quickly descended into the bush which turned into forest as we followed Yatala Creek down to Jerusalem Bay. The weather, which was forecast to be a “shower or two” turned out to be quite sunny and not too hot. After walking through the cool shade of the forest around the creek, we encountered Jerusalem Bay with fine views. There were also battalions of Soldier Crabs walking across the sand flats as it was low tide. We then crossed the mini-rainforest at the head of the Bay and began the climb to the top of the ridge, which is the steepest part of the whole walk. On reaching the top we all had a welcome water break.

Then it was down again to Campbell’s Creek and then the track meanders along a slope until climbing again to eventually reach the fire trail/rail access road. Along the way there is a mini Taros Ladder (3m rather than the 15m of Taros). Once on the trail it was a fairly straightforward walk with a side track at one point to see a view of the sea at Broken Bay. We eventually found a lunch spot – or rather it was three separate lunch spots as not only was shade at a premium at one, but a couple of walkers who were a little behind us overshot us and simply found shady spots just further down the track. We enjoyed views over the Hawkesbury River and Long Island as we had lunch.

The it was on the last section of the walk down to the Brooklyn Dam, which was built originally to provide water for steam trains. Due to the flushing by recent rain the dam outlet didn’t have its usual pong, but even so I wouldn’t recommend swimming in it, let alone drinking the water! We crossed near the dam wall, and then commenced another climb on the rail access road to the ridge-top, which we followed for a while until reaching the Railcorp concrete road, which the NPWS recommends as the exit to Brooklyn. I am not convinced it is safer than the original track which presently is in disrepair, as the concrete road is quite steep. Even so, this road yielded our only significant sighting of wildlife – a small Brown Snake. Sam declared it to be a “File snake” but from Iris’s description there was no doubt that it was a Common Brown Snake (I didn’t see it). After the concrete road we entered the streets of Brooklyn and headed for the “Anglers’ Rest” hotel for well deserved liquid refreshment. With still a bit of time before train departure we went for a short walk along the road which leads to Old Long Island tunnel; we encountered a gate half way (although it appears to be easily by-passed if you want to!). But time for the train was nearing so we made our way back to the station to get our respective trains home.

This was an enjoyable walk in good weather which was enjoyed by all.

Now about transport apps: take my advice: NEVER rely totally on apps. They can be wrong. Always check at the station for times and platforms etc. An example: on a walk last year I instructed walkers to catch the 6.30pm train to Woy Woy (Newcastle line). Unfortunately one participant did a search on an app for trains leaving Central for Woy Woy at that time. It give him a choice of two trains; one was the correct one, but the other was via the North Shore line (change at Hornsby with a half-hour wait). Yes, he caught the latter one!

About “no shows”. It is quite annoying for people to put their name down for a walk and not turn up without explanation. Two people wanted to come on this walk but I had put them on a wait-list. They were unable to come as there were no vacancies, or so I thought. This is especially important on trips where car spaces are at a premium. Being a “no-show” on these trips will result in most walks leaders banning you from their future trips. You have been warned!!