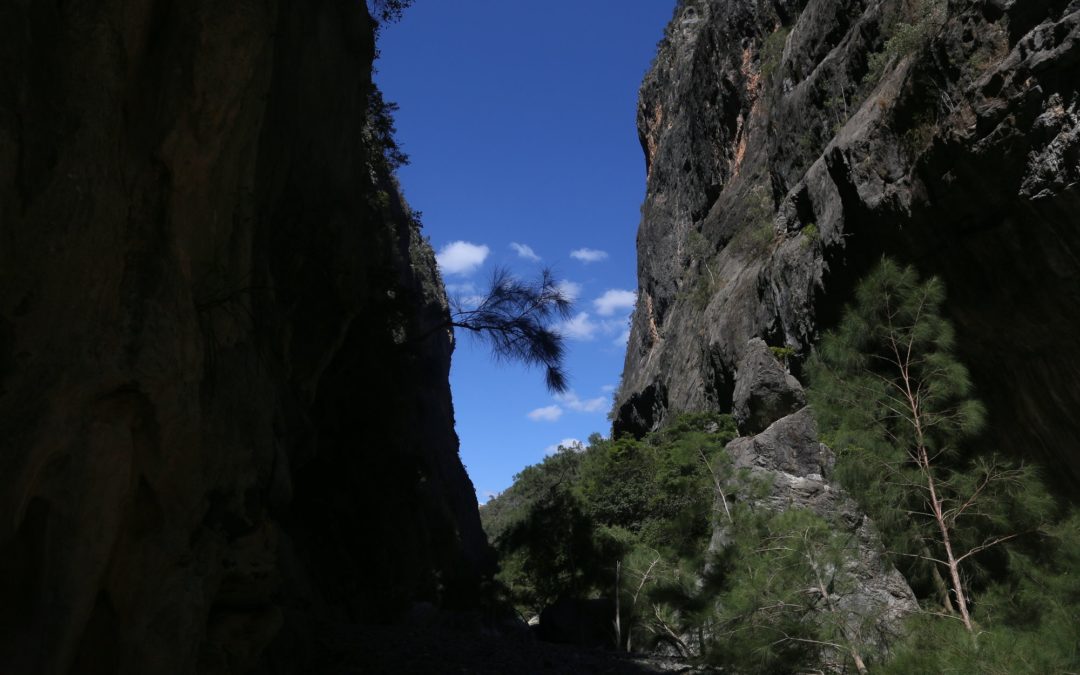 Press on Regardless! It’s the SUBW motto, but sometimes, it’s good to wait for better weather…

On the weekend of 22 – 23 Feb I organized a trip to Bungonia Gorge. I had planned to run the trip in January, but the temperatures on that weekend were forecast to be in the high 30s up towards 40C. So I had a serious rethink, especially about group safety, potential fire risks and heat exhaustion, and then took the decision to postpone it. And I’m glad I did. The gorge is a very dry place, and even though there are some flowing rivers and creeks, the whole area open and rocky, capturing  and reflecting the heat, meaning even our 25C weekend temperatures felt warm enough. And it turned out that the weekend of our rescheduled walk had ideal weather!

Our party of Peggy, Tariq, Michael, Sean, Sam and myself, arrived at Bungonia Gorge at around 10.30 on Saturday. It was a lovely morning following  some early drizzle, and pretty soon we headed down the “Red track” towards the deep gorge. Bungonia Gorge is a massive limestone slot canyon. It is about 350m deep, with high cliffs and limestone features. It is also a karst meaning  it’s a limestone area where there are a number of deep caves. We had a quick look in one that was close to the track with a short ladder in it. We peered into the gloomy depths, but that cave would need ropes to explore in so we left that for perhaps another time!

Pretty soon the Red track started its very steep descent. A few of our group started to get “ jelly legs “ although my remedy for this is to eat jelly snakes. Seems to work… Finally we arrived at Bungonia Creek where we dropped our packs and began an exploration of the gorge itself. Massive boulders soon blocked the way, but it was a lot of fun finding ways up over under and around these obstacles. Sam discovered an amazing green luminescent pool, lit by sunlight coming through holes in the rocks. It was fed by cave water which we soon found out must have only been a very fresh 10C! But a very exhilarating way to cool off.

However, just as in all good horror movies, the idyllic paradise like pool had a dark side! Sean felt something brush past his leg in the water, and we soon discovered the pool was home to a few 1m long eels. Not knowing if they bite or attack, it was soon decided the swim was over and we continued on our way through a maze of house sized boulders up the gorge. Lunch was spent up the top end of the gorge, a peaceful and spectacular place, with towering trees and cliffs, caves in the walls and a feeling of tranquility.

After the late lunch, we headed back down, rock hopping and scrambling to return to our packs. As we headed downstream we discovered a jade fresh water pool complete with a good campsite. The warm afternoon brought another chance to swim and we set up camp in an idyllic bush setting.

The next morning was a bit drizzly, but as we faced a 400m climb out we didn’t mind it being overcast. Michael and Tariq headed home before us, so we took our time and just enjoyed the surroundings, Sean and Sam even managed a morning swim as well. A 1km off track creek ramble brought us to the Shoalhaven river where we took in the serenity. Ah..the serenity…(and its not even Bonnie Doon!) The casuarinas lining the river bank made the setting feel almost European, its quite a change of scene  from other places in NSW, and one of my favourite spots.

We then faced our final challenge , the big hill up to 500m Mt Ayre. Despite the steepness, everyone seemed to tackle it with gusto, and  with the views to take in (during frequent breathers ) on the way up, we made the top in the early afternoon. A quick look at the gorge lookout to see where we had been , a looooong way below us, was a good ending to a very enjoyable weekend.

Thanks to everyone who came along on the trip, it was a great way to spend the weekend in an amazing part of the Southern Highlands.