We were up for an adventshaaaaaaaa ( “wickeeeeeed!”, “epiiiiiiiic!”). So we met up at North Richmond as usual, drove up to the Claustral car park and started walking – 17 minutes behind schedule as the German pointed out. This actually turned out to be good timing because a few meters down the track we had a beautiful view across the mountains with a really colourful sunset.

We continued down the gully towards Claustral during dusk and when we hit the forest we had to start using our head torches. We reached the junction with Claustral just as it became properly dark and Kristian already spotted the first glow worm — the true reason why we were here. We started descending into the canyon with more and glow worms appearing at the walls, down the hand over hand and we quickly arrived at the jump.

I climbed down and checked the depth and Helen was the first to jump. But as she reappeared at the surface, her head torch has fallen off the helmet. And unfortunately it was off when she made the jump. We tried for a while to find it in the water, but it was too deep and after us having jumped and swum around, there was no visibility in the water and we had to give up. Luckily we brought a few spare head torches so we moved on and decided to give it another go the next day during daylight.

Helen jumping into the pool with her torch off.

We continued to descend down the canyon and eventually reached what we were looking forward to: the abseils. How beautiful would they be in the dark with starlight like glow worms everywhere? We quickly rigged the first pitch and off we went. But what was this: no glow worms at all!!! The entire section with the three abseils was in pitch black! That was a bit of a disappointment. We quickly continued down the remaining drops and at the bottom of the last pitch we finally got our glowing canyon. It was stunning to follow the canyon from there to the Thunder junction. We stopped frequently and switched off our torches to enjoy the view. From the Thunder junction we went to look for our camp cave, found it bang on and shortly after we had a small fire going and enjoyed wine, nibblies and camp fire tales before finally going to bed.

The Black Hole of Calcutta

The next morning we slept in to compensate for the late night and then went down the remaining section of Claustral during daylight. It wasn’t long before we reached Rainbow Ravine and because we had enough time we decided to leave our packs behind and explore the canyon a bit further down stream.

After a while we met a large group of nine who had done Explorers Brook the day before, camped there and were now about to exit via Rainbow Ravine. We continued a bit further down from there and then Kristian spotted something he first thought could be some exceptionally large fungus. Upon getting closer we realised it was by far of natural origin, but littered bushwalking gear. There were two day packs and all around them some items of clothing and most prominently quite some first aid gear including a space blanket. The fungus was one of those cheap rain ponchos. It was made “waterproof” using lots of freezer bags and didn’t strike us as typical canyoning gear.

We started wondering what might have happened and tried to remember whether we heard of any recent rescue in this area. It really seemed to be left behind when a party that was in trouble finally got rescued. We then decided to pack everything into the backpacks and lug it out with us to dispose of it properly once we’re back in civilisation.

When we finally reached the top of Camels Hump we bumped into the other party again and when we told them about what we’ve found in the canyon, they told us they saw the packs as well. But not only that. They also told us that the two packs were still properly packed which everything inside the packs when they arrived. It was them who unpacked everything and spread it out to see if there was anything useful inside. We were speechless and afterwards thought we might have misunderstood them.

We continued to Camels Saddle and down into Claustral and then detoured to retrieve the head torch we lost the previous night. But unfortunately, the water was still cloudy and we couldn’t properly see the ground. After several more attempts to dive and find the torch by touch we had to give up and returned back to the car.

There we saw the other group once again and brought up the issue with the rubbish again. It seemed they didn’t see anything wrong in not only neglecting to carry out the rubbish from a wilderness area, but instead making it worse by spreading out everything to get washed away and eaten by animals separately. The only response that we got was simply that that this was our view and that we were entitled to it. Then they drove off.

Following this, we had a longish discussion about the rubbish issue in the car back to Sydney and I’d like to share some of the thoughts we had here.

We believe it is everyone’s responsibility in the bush to carry out the rubbish they find wherever possible. This is especially true for wilderness areas that are far enough away from road and popular tourist access so about everything you find in there was carried in by someone in the first place and the lost/dumped/forgotten. Sure, one could say “I don’t litter therefore I don’t carry out other people’s stuff”. But let’s be honest: everyone has lost something in the bush before. Something might have been forgotten at camp. Or at the windy lunch spot it was blown down the cliff. There is the notorious muesli bar wrapper that disappeared from your pockets while walking. Or the animal that nicked something overnight. How many of us have lost (or found) gloves in canyons before. Or in our case a head torch got lost. I doubt any regular bushwalker can truly claim his party never littered in the bush. To make up for it, the least we can do is carry out the rubbish we find.

Apart from this obligation, it is also in all of our interest that the bush is clean. Nobody likes stumbling across rubbish. But if we do and carry it out, the next person will have a better experience. Just assume that were you walked before has been rubbish as well but another party removed it for you when they passed through. This way everyone benefits.

Sure, there are situations where it isn’t possible to take with you what you found. If you are, say, on day one of a hard six day hike with a small group and stumble over a heavy load trash, everyone understands that you can’t take it. But then leave it in a state where it does the least harm. Maybe you can even put it somewhere safe and pick it up on the last day. But here they were a group of nine people on their final leg of the trip. So it seems hard to justify that it wasn’t possible for them to split up the small packs between them and carry them out.

But certainly it does not seem appropriate to spread out everything that was inside the pack. By doing this, animals drag away and eat the individual pieces. Wind and water washes away every bit individually. And you’re also making it a lot harder for the next party to carry it out because that group has to collect everything first instead of just packing the whole packs. If you spread it out like this, you might as well have dumped it there in the first place.

And last but not least, this is not just our view, but it is also established in the Bushwalkers Code, which is not just written by us but in fact it was produced by Bushwalking NSW (formerly Confederation of Bushwalking Clubs NSW).

The leader of the other group sent out an explanation of the situation and he did have reasons to not carry out the rubbish. When we talked to the group on Camels Hump and at the car park, he wasn’t present himself since he and a couple others did another short canyon. Our write up above is based on the explanations we got (or didn’t get) from the remaining members of the party. Nevertheless, I still believe making the situation worse was unacceptable.

I was the leader of the other group in Helen’s post, I’d like to offer some commentary to Helen and Kosta’s comments.

I’ve been climbing, bushwalking and canyoning in the Blue Mountains for 11 years , I’ve visited 300+ different canyons and am passionate about protecting our bush and wilderness. I always carry out rubbish and practice minimal impact bushwalking, however, Sunday’s circumstances were different.  This incident is very embarrassing and has upset me dearly.

The Packs in Carmarthen Brook

My SBW Group
The group had a wide range of experience and ability, from 300+ canyons to just 2. We had an 8.5 hour day on Saturday, had already been going 4 hours on Sunday with potential for 7 more. All that with water-logged full w/e packs, some found that challenging, but just a normal w/e for me:

We were behind schedule at this point. Once the party re-grouped, we immediately left the packs to keep the group moving, I was entirely focused on getting the group out of the canyon, forgetting to repack the gear into the packs to tidy the scene. That was my mistake and I’m responsible for that which I regret.

Helen & Kosta’s group
I don’t know the group so can’t gauge how they’d rank compared to ours, but Helen’s group was certainly younger than ours, and probably stronger and fitter too. Helen’s group had exerted significantly less effort at that point, and were not carrying packs.

The Leaders’ Decision
Given the circumstances, Helen and Kosta’s decision was a very different proposition to mine:

Yes, I felt strong enough to complete Gaping Gill without the w/e pack, but didn’t feel strong enough (or have the balance) to carry extra weight up Rainbow Ravine – I found it very challenging with only 1 working hand, not sure how I’d fair with extra weight in my pack.

Discussions between the 2 groups
I wasn’t present at either discussion so have no knowledge of what was discussed or expressed.

Sydney Bushwalkers
SBW has a long and proud history and is the oldest outdoor club in NSW. This incident has caused great embarrassment to the committee and club members. I have expressed my sincere apologies to the committee for this negative publicity and have offered them to annul my membership if they deem appropriate.

Had I not injured my hand on Saturday, this story wouldn’t exist… 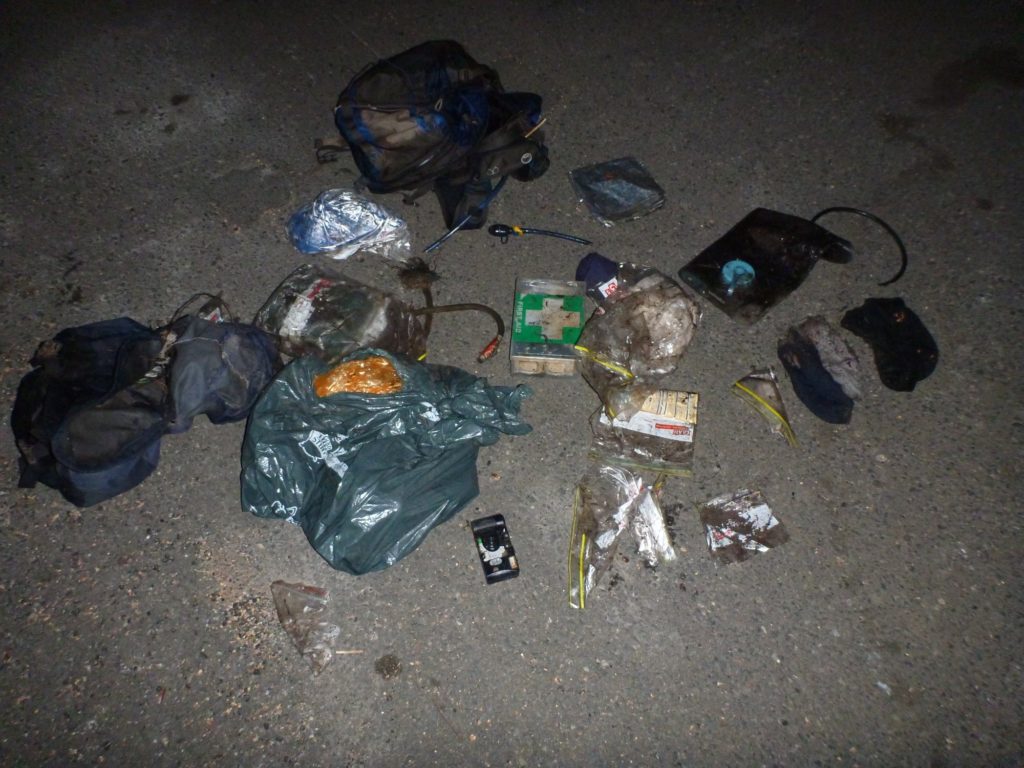 The two backpacks we hauled out of Claustral and their content. The piece of rope was not part of it – we picked it up somewhere else.