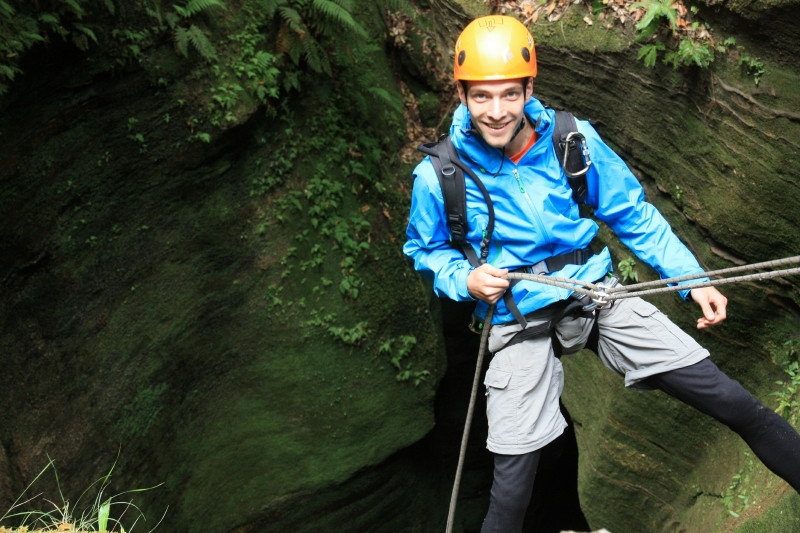 After weeks of baking dry conditions, a little rain fell on Thursday and Friday and this brought welcome relief to the parched mountains and set the stage for perfect weather conditions for this very popular trip! Indeed, it was a company of some 15 people who made their way down the Wolgan Valley on Friday evening and setup a camp some distance away from the busy main Newnes campground. The stage was thus set for 3 days of excellent canyoning with a great group of people using Newnes as our base camp and this comfortable base camp was where we would return after each day.

The first day was a long one but very enjoyable. As we had 15 people, some of whom had not abseiled or canyoned much before, we needed to allow a full day to get through our first canyon – Devil’s Pinch. And so it was that at around 7:45 in the morning the declaration “heading off in 10 minutes!!” was made. An hour later we had finished breakfast, sorted out abseiling gear, sorted who needed what, and were ready to go.

It began with a climb of the Pipeline Track and at the top we setup ropes for some practise abseiling. Those who needed it were taught how to clip on, clip off, communicate and most importantly, how to walk backwards off a cliff without falling. But not necessarily how to do it without turning upside down – Annie did exactly that – but she wasn’t discouraged at all. In fact, she went on to do many harder abseils during the weekend without a repeat performance of the upside down abseiling trick.

And so it was into our first canyon, Devils Pinch, with some navigation through the scrub before we reached a cool shady overhang where we had a quick lunch. Then it was on to our first abseil, a nice 15m drop into a cool narrow canyon. Once we had all finally got down here we emerged into an area of open leafy rainforest with  vines and coachwood trees and one vine had formed the letter ‘O’ and this made for several nice photos. We continued downstream, there was more narrow canyon with black stagnant water in it and some awkward downclimbs and log walks and bum slides and this made for fairly slow going. The final abseil was also about 15m and took us into a superb deep constriction of sandstone canyon, a true work of art wrought by nothing but water erosion and a great passage of time. The narrow canyon rounded a corner to become the classic deep sandstone slot with enough light for some mighty coachwood trees to stretch their long trunks towards the sun, this is a magnificent place. Photos.

Down we went to the Wolgan and here the river was gentle, shallow, sandy and warm with the sun in the west and shadows lengthening. We spent time here lying in the water, washing out shoes and enjoying the clean fresh and flowing water – a contrast to the stagnant bilgy water of the canyon. It was time to head back to Newnes. Annie, Mike and I decided to run back – a slow jog under load thanks to ropes around our necks and bouncing packs but we got back to camp and a fire going and tea on for when the others arrived. The last of the party turned up at camp just before dark after detouring among the Newnes mining ruins.

Other SUBW members, Martin and Steffy and a friend of theirs dropped in for a few minutes. Later a brushtail possum also paid us a visit, attracted no doubt by the smells of various foods. David met some friends at another camp and disappeared for a while. He lives on meat alone you see, and they had a BBQ going with lots of animal on it. The rest of us tucked into our (mostly vegetarian) food and wine, and as it had been a long day, most people retired reasonably early and the campfire circle was quiet after about 10:30pm.

Sunday was another day and it dawned cloudy and a bit cooler, perfect weather for another slog up the Pipeline track. By now everyone knew what “heading off in 10 minutes!!” really meant but nevertheless we were all ready to go before 9am. This time there were 13 of us, Gary had headed off and Laura would soon follow.

From the top of the Pipeline track we headed towards our canyon and one easy abseil was needed to get us into the main creek not far upstream from the start of the canyon. There in the shady dry river bed we had our lunch. The canyon started with an awesome 20m abseil. We made rapid progress by setting up 2 ropes so 2 people could abseil simultaneously and by now everyone had had plenty of abseil experience from the day before. At the bottom we found ourselves in a mossy cavern, deep, damp and shady. Ahead lay the canyon and it was narrow and closed in overhead.

Torches went on and we walked through the pitch black tunnel with its sandy floor, this is a truly amazing place. We stopped and turned torches off, glow worms could be seen – the starlight. Wonderful place. A few bats were around. On it went, a very long canyon, it eventually opened out into a beautiful canyon gorge with towering coachwoods. I love these tall trees anchored to the canyon floor and stretching their long slender trunks to the daylight far, far above. There great ancient looking vines everywhere. Photos. When I told Annie and Sierra that it’s possible to climb the vines to get out of the canyon they went and did exactly that. Tarzan stuff. Fortunately they both got back down without incident and we went on to complete the canyon by the conventional route. There was more beautiful gorge before the system finally emptied itself into the Wolgan Valley.

Down at the river we again did the routine of lying in the shallow water and washing and cleaning. This time we finished the day much earlier, by about 4:30pm. Again Annie, Mike and I ran back to camp and the others followed in their own time. And again David headed off for his supply of meat, apparently his limit of survival on a vegetarian diet is something like 6 hours.

One carload of people departed that evening. The rest of us had a great time. After dinner we tried some yoga and various attempts at stretching and twisting our bodies into unlikely configurations. Then, after a suitable amount of alcohol it was time for prussiking lessons. A rope was thrown over a tree and many learned how to climb the rope using two loops of thinner rope, very useful skills for the canyoner! A great evening after a great day!

Another carload departed Monday morning leaving 7 of us at Newnes for our final canyon – Pipeline. Up the Pipeline track one last time, hot on the heels of a large group from SBW who had been doing the exact same canyons we had all weekend. A great little canyon. More water and more abseils. Some of the abseils were quite awkward, and there were around 5 of them all close together so it was good that we left this, the most technical canyon of the 3, until last. Great fun was had, particularly on the last abseil which started with a dramatic swing under a ledge. We all got through, it was a warm sunny afternoon and the patches of sunlight at the end of the canyon were very welcome. Leah found the little patches of sunlight to wait in at the top of each abseil and when all were down we welcomed the warm walk under the cliffs back to the Pipeline track.

A very late lunch back at the cars was had, and by 4pm we had packed up and tidied up our camp site. And so we returned to Sydney, happy, relaxed and contented after a great weekend.

Certainly a first rate weekend, everyone had a fantastic time, it was a great group of people and lots of fun in one of the great valley systems of the Blue Mountains.