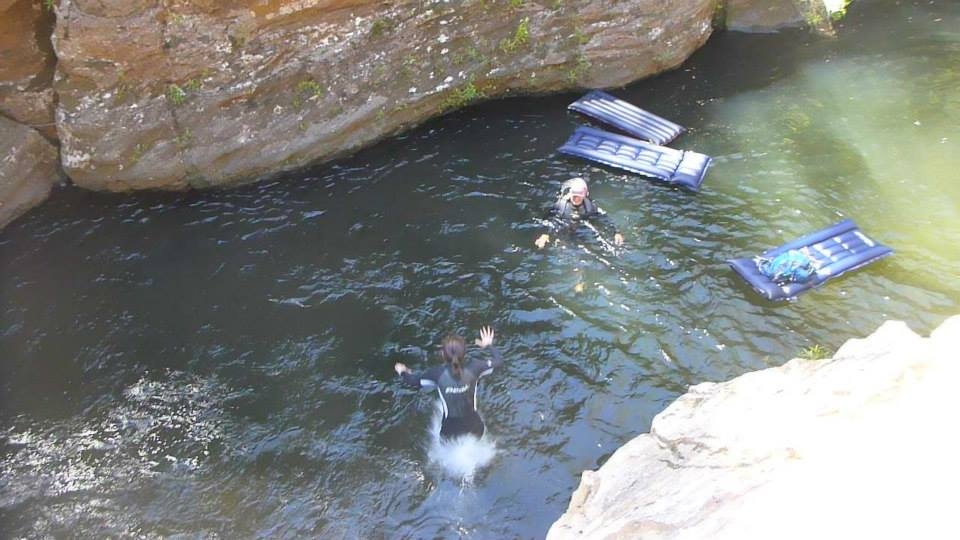 This was going to be a trip down the Colo River from Crawford’s Lookout to near Canoe Ck. However, after posting the trip on SUBW, Alexa wondered if the Coloul Range Fire Trail was actually open and not it wasn’t (that was our starting point), Grant called to tell me that the water levels at this time of year are low and the distances would make it a bit of a push for two days (next time I’ll make it a three day trip), and T2 emailed with low water information as well. Thank you! So we opted for other plans. The Colo can wait a bit longer.

After confirming with NPWS that Wollagambe 1 + 2 were indeed open, and they were (had been for open for about 2 weeks), we drove to Mt Wilson campground Friday night where we met Peter and Christine. Peter had done an Introdution to Canyoning weekend with the two Ts a couple of year ago (?) and was keen for this trip. Christine was new to all things canyoning.

The post fire walk in from the fire station was ominous but it was good to see regrowth under way. There is a lot of exposed dirt so when the rains come there is potential for a lot of erosion. Once at water level things were much better and the river was clear. Would be interesting to know how much back burning was done close to Mt Wilson.

It was a spectacular day, blue sky all day, not much wind. We were keen to do both section 1 and 2 but with three exits points to choose from we would see how the day unfolded.

We started down stream of the big corner and quickly found our paddling arms and a couple of holes in old lilos, no real troubles though. There is so much to enjoy on this river, and it was a day for paddling, scrambling, pirating, floating, finding the best jump ins (and getting more bold as the day went on) and exploring the ends of other canyons connecting to the Wollangambe.

At midday, 20 mins short of the exit point for Wollangambe 1 and with cold setting in for Christine (who had a 2mm spring suit, whereas the rest of us had steamers), we stopped for lunch. Good plan. This was rejuvenating and when we continued and came to the first exit point we were keen for more, so on we went. The feeling was the same when reached the end of Serendipity Canyon and exit point 2. So on we went again and headed off to the exit for Wollangambe 2 where we very unexpectedly met Alex, a friend who had taken a wrong track and along with his wife and two children (6 and 8), were now planning on camping at the smallest of beaches currently at this exit. Seemed like the kids were having a great time, although they were harsh critics of my blue and orange reading glasses and my surf hat!

We returned to camp, tired but happy after our 11 hour day. In retrospect I could imagine exiting near Serendipity Canyon next time. Drove to fetch the other car from the fire station and then dinner! Great day.

This would be a much more challenging and very different day than yesterday and so after helping with a car shuffle, leaving one car the new Claustral exit, Christine left for home.

Ranon Brook began for us at hill 888. It’s always a treat heading in when you know that eventually the thick scrub and the small creek will give way to more canyon like appearances. The first signs were the creek bottom becoming rock, the higher walls of cliffs starting to appear and then the first abseil. We can certainly recommend taking this way in to Ranon Canyon.

The track notes give you plenty of ideas of what to look forward to. We took 3 x 30m ropes for this trip. We could have taken just 2 of these, but occasionally having the third rope meant we could be setting up the next abseil as others finished the current one. It also meant that instead of the 35m abseil at the vey end of Ranon Canyon (very specky) we had to do the to two smaller but very interesting abseils. Happy to have done this. I didn’t really check this out, but it may be possible to camp before the last abseil, making this a 2 day trip. Has anyone done this?

Once down into the end section of Claustral Canyon, we explored upstream to the bottom of the last abseil and then marveled at the high walls and back lit ferns as we continued on. Just beautiful.

As well as the numerous yabbies along the whole trip, we passed two small snakes, at different times on this lower section, and very momentarily I pondered if it would be possible to transport a snake out to warmer places. Seems like they are in for a cold and even life ending time where they were. Had they fallen into the canyon?

Shaun and Kristian invented one more abseil on route to the Rainbow Ravine exit point, and we all had a grand time scrambling around. From the exit, S and K headed up before I did and took the right hand gully rather than turning under the cliff before heading up – I hadn’t given them enough information – they were keen to keep going. However, it was getting late (I thought it would be a 9 hour day and turned out to be 11 hours) and I didn’t want to run the risk of an uncertain track – maybe next time. They also discovered some unthoughtful toileting up that gully.

At Camel Saddle I had a bad case of bushwalkers memory (“I’m sure it’s just round the corner!”). The track to continue is actually up higher at a second small saddle (as per the track notes). We wasted some time sorting this out then found the right track. We decided we still had time to continue this way and made quick time. K and I sorted out the navigation and we soon found the new exit gully along Claustral Brook. I was pleased to see that if you watch the map and features and direction of the creek then the exit gully is very clear.

Then we were up the gully and back into daylight, eventually coming to that rock lookout not far from the road to watch the sunset. This trip had a lot of canyon variety that added to a great day.