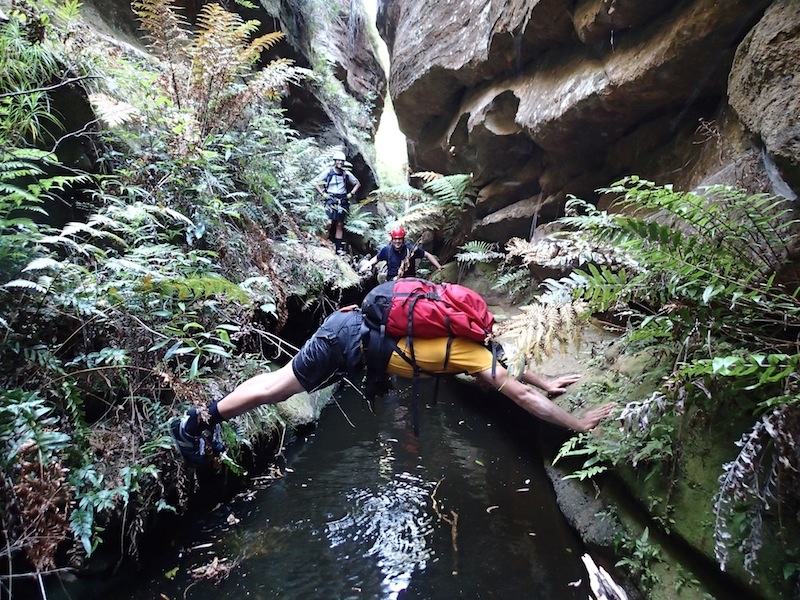 What better way to escape the scorching temperatures of Australia’s hottest year on record than to hang out in some of the more remote canyons in the Wollemi National Park?

That said, we nearly didn’t make it to the Cooroongooba campground, with 11 fires flaring up in the Wollemi region just before Christmas and the campground taken over by remote firefighting helicopter operations. Fortunately, the wet weather that ruined most Sydney-siders’ Christmas plans was an absolute blessing for us, and the section of the Capertee River where we planned to operate was reopened the day before we were due to drive out. That left us with plenty of canyoning and swimming options to choose from. 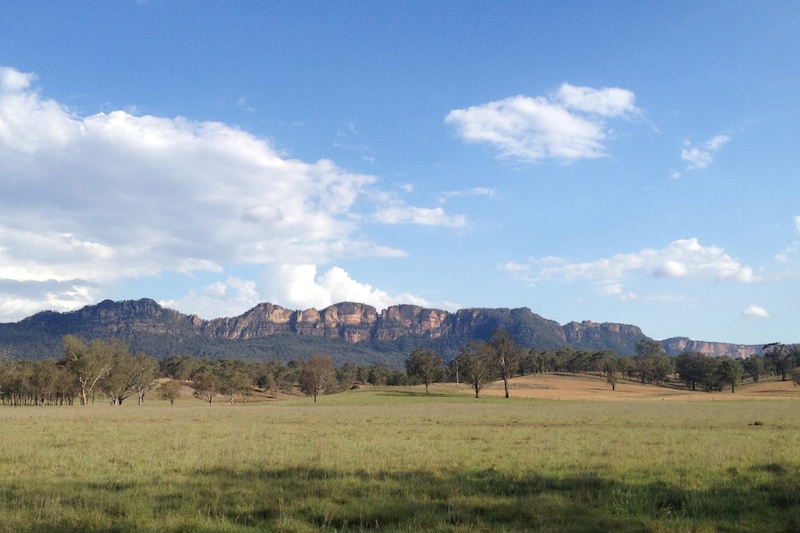 Given the density of the scrub, the hot weather, and the Xmas food hangover that most of us had, the group size and composition varied from day to day, with most people pausing for a rest day after two or three days of canyoning.

Several families also bought their kids along, which served as a fantastic contraceptive reminder for all us non-parents!

Still fresh, we decided to tackle one of the furthermost canyons south of the Capertee that you would easily consider doing from a base-camp at the Cooroongooba campground. We could see from the map that this creek had two branches and decided to have a crack at the further one.

We got up in time for a reasonably early start and set off at a cracking pace along the fire trail, managing to avoid the hundreds of bull ants waiting to get us. 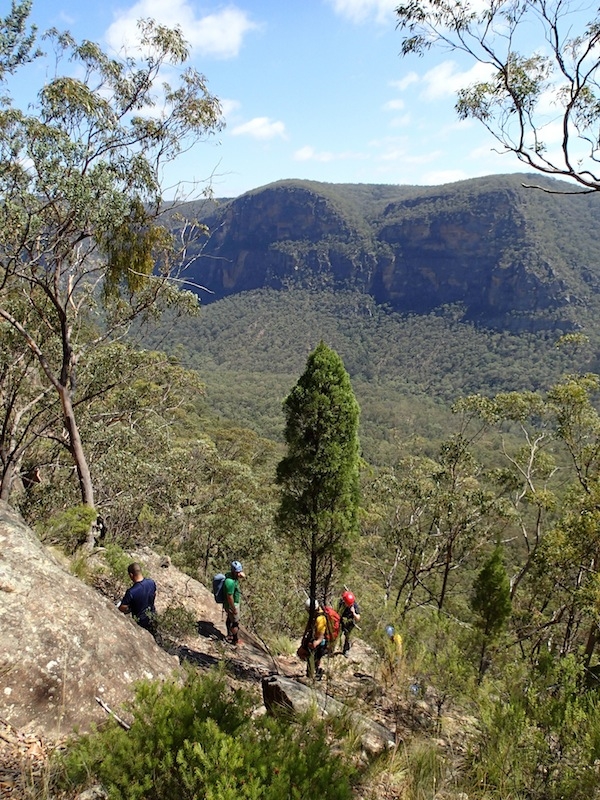 Looking down to the Capertee from our pass through the cliffs

After a short stop to admire a seriously obese goanna we began our ascent, skirting leftwards around the base of the cliffline, looking for a decent pass.

The topographic maps for the area take a while to get your head around as they use 20 metre contours, and we learnt very quickly that cliff-lines are often simply not marked. 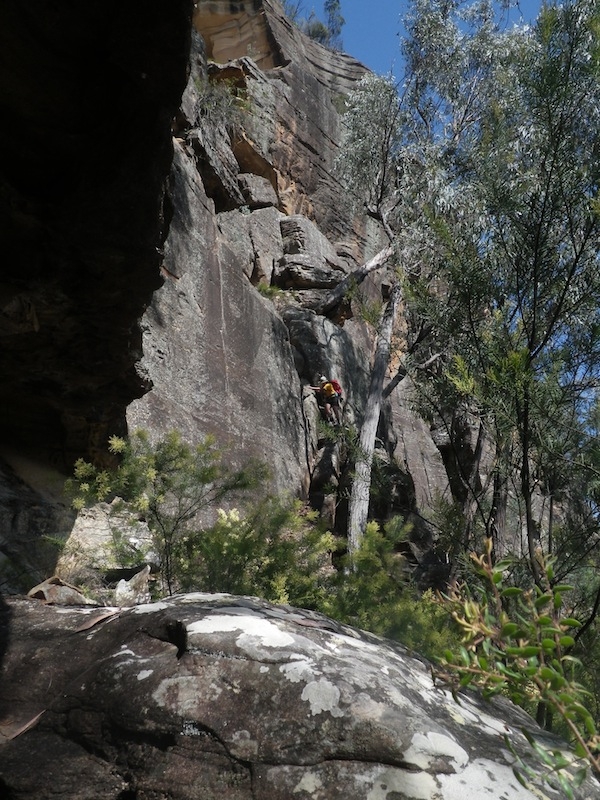 Kosta trying to push a challenging route through the cliffs

We tended leftwards, negotiating our way up a relatively clean pass, only stopping to pull out the handline once or twice and using the occasional helpful shoulder or handgrab.

Even though we all carried several litres of water, the heat of the day meant we were all desperate to drop down into the canyon for lunch.

The canyon started reasonably high up with a few abseils and scrambles, but the most substantial drop came as a total surprise to us, dropping into a slot with water at the bottom. 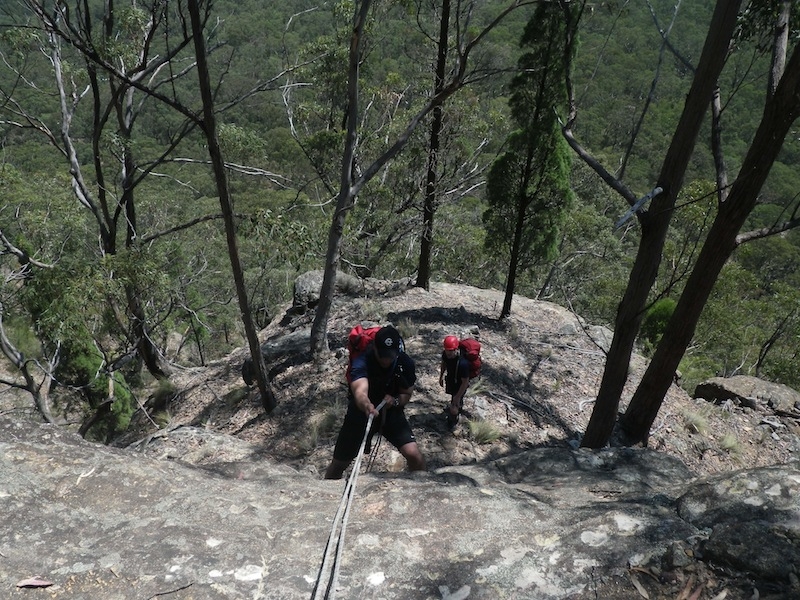 We set up a handline to help with a tricky bit

After a lunch break we continued to wander down the creek, happy to be out of the scrub and into the shade.

We paused for the quick swim in the Capertee before reaching camp for some well earned beers. 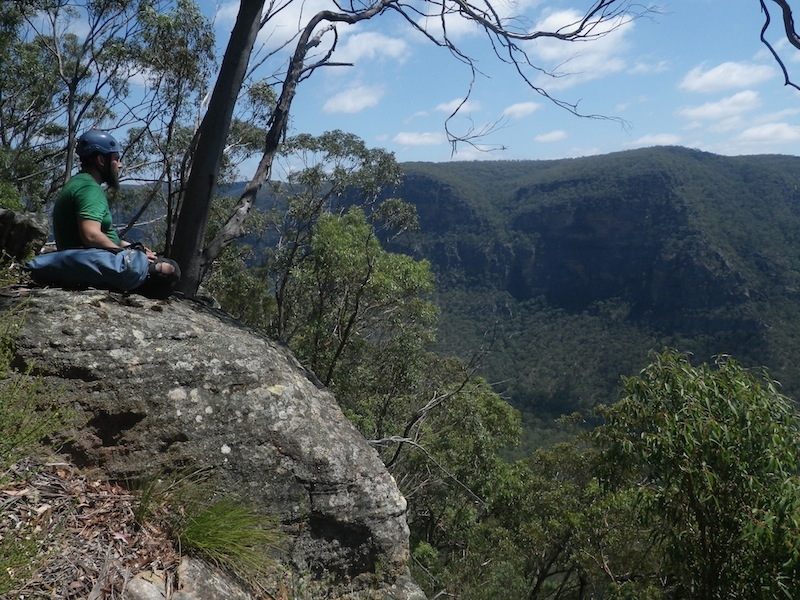 Joshua looking meditative near the top of the pass 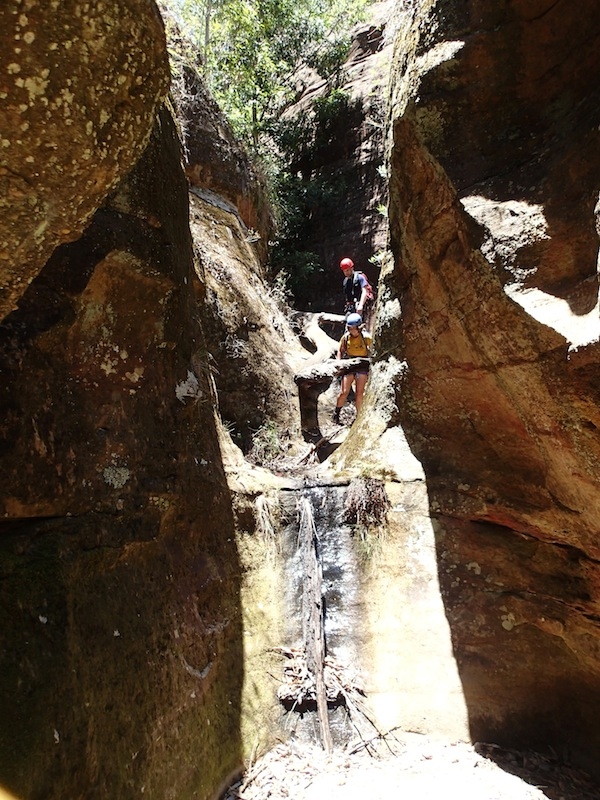 Dropping into the canyon 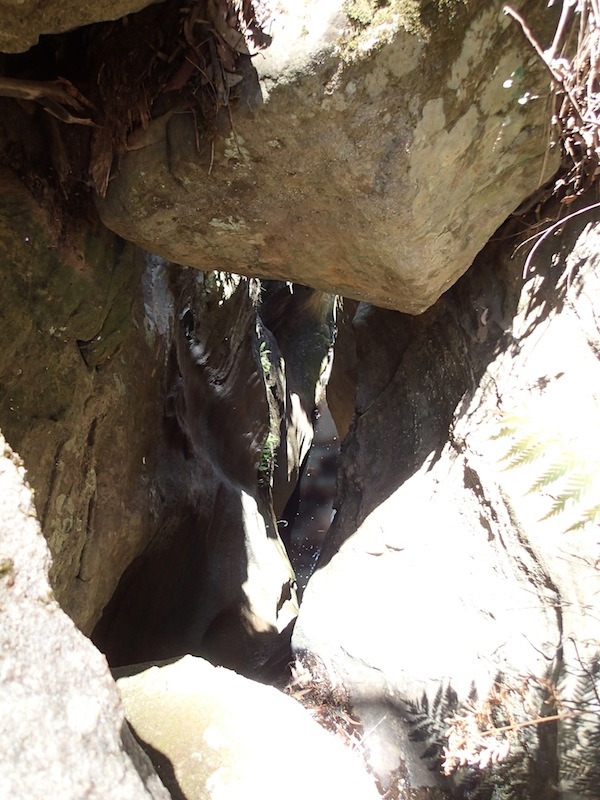 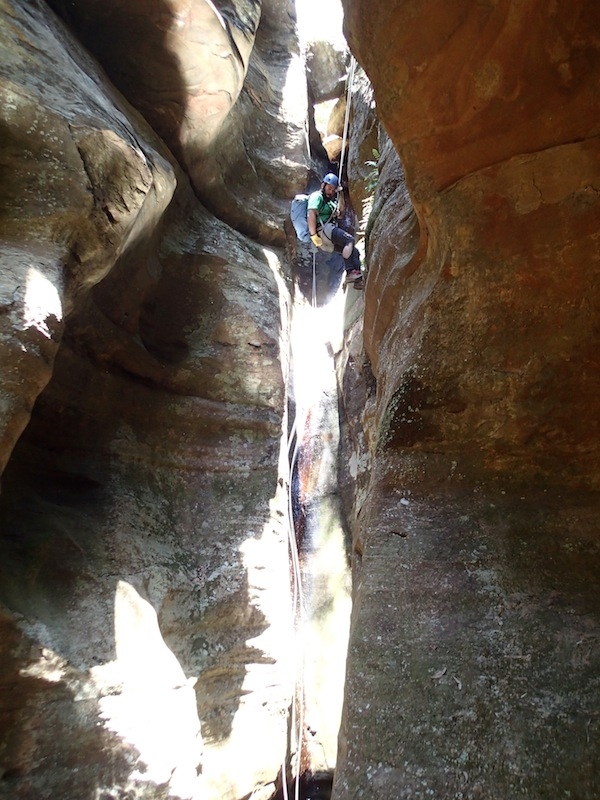 Joshua on the most impressive abseil 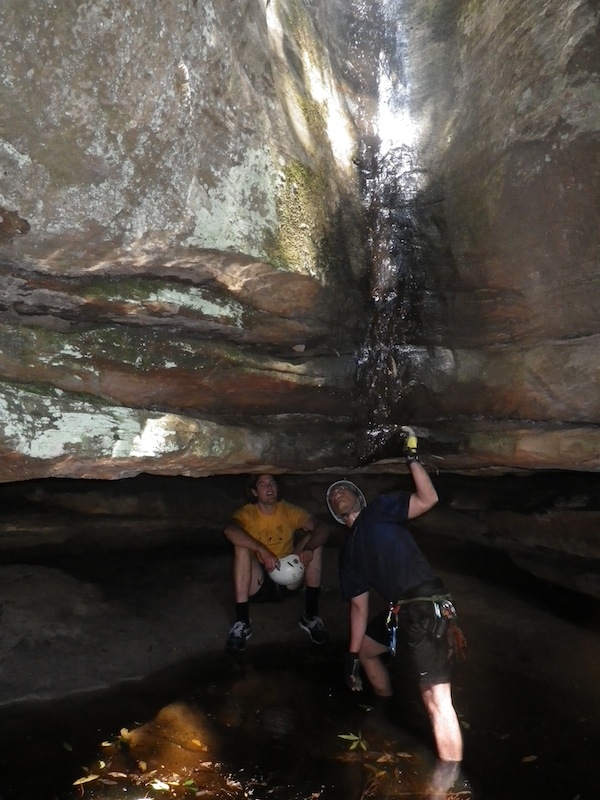 Taking a drink in a small side canyon

Feeling a little sore from the previous day, but still fresh enough to tackle the scrub, we decided to try one of the four-and-a-half branches of a prominent creek just south of the campground.

Once again we hit the fire trail, this time remembering to plant some beers at the swimming hole for the end of the trip. 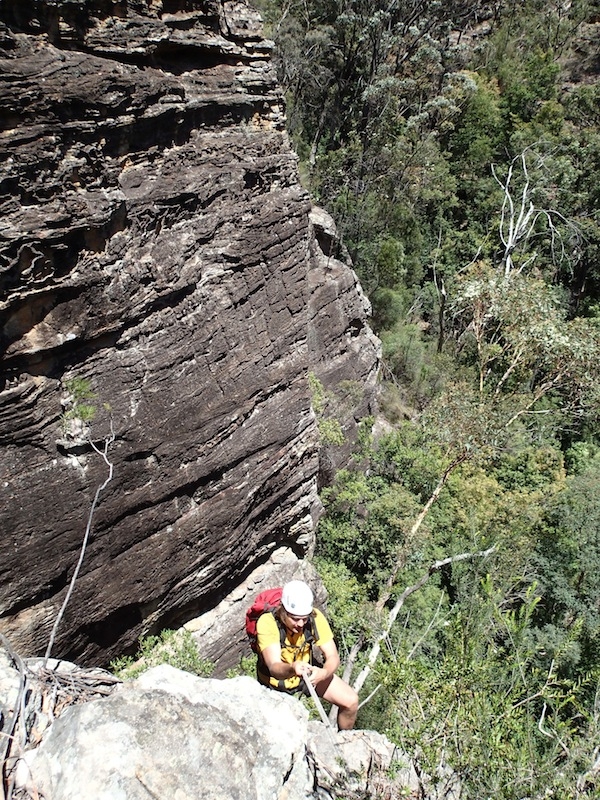 Kosta at the top of the exposed pass we eventually found

Judging by the previous day’s pass, we were optimistic at being able to make a quick pass again.

This time we weren’t so lucky. Once we hit the cliff-line it was completely clear that there was no way up the sheer cliffs. We tended around to our right, getting increasingly frustrated at not being able to find something that went. 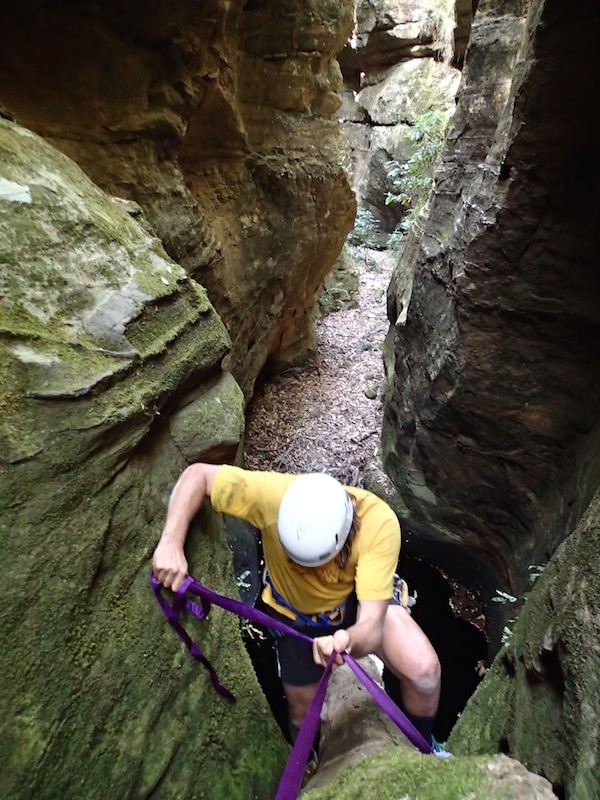 Kosta climbing down a small drop

After several hours of trying various routes, we eventually settled for a pass that involved some free-climbing. Stephen headed up with a rope and dropped it down for the rest of us to use.

By the time we made it through the cliff-line we were exhausted from the heat and had easily lost a couple of hours. We stopped for a quick snack before picking up the pace again across the ridge to one of the eastern branches. 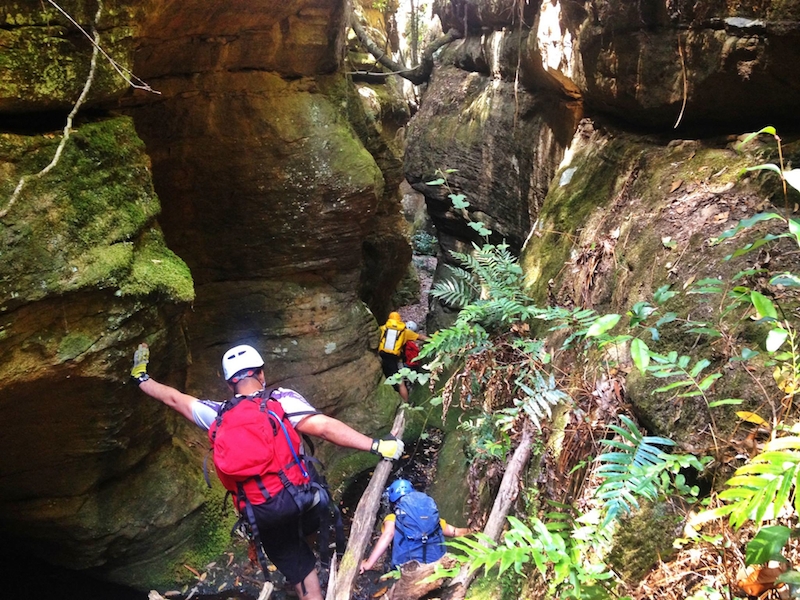 Scrambling though the impressive constriction

We wanted to drop in as high as possible, but faced with immense scrub, opted to abseil down a few cliff layers into the canyon.

We had a well needed lunch break, and quick dip in the pool, before heading into the canyon. 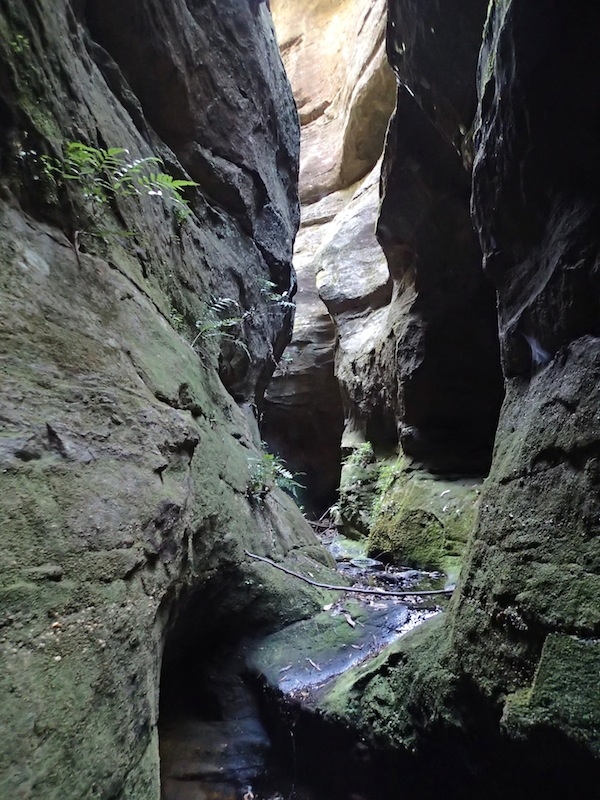 Ironically, the canyon was the easiest part of the whole day! And also, as it turned out, completely reversible. Nicely placed logs helped us down the drops, and although there were a few swims, much of the canyon dropped gently and was pleasant walking.

At the end of the day we stopped for a well deserved swim in the Capertee and retrieved our hidden beers before heading back to camp. 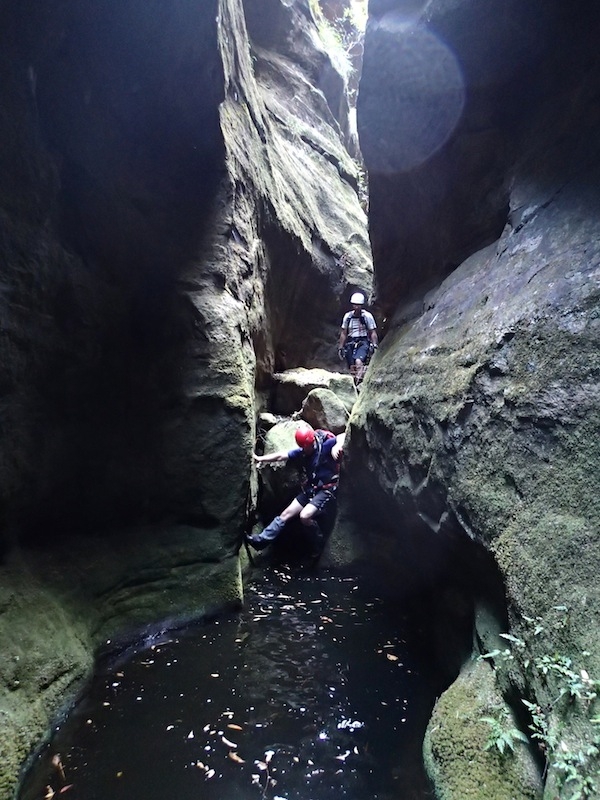 A small climb down into a deep pool 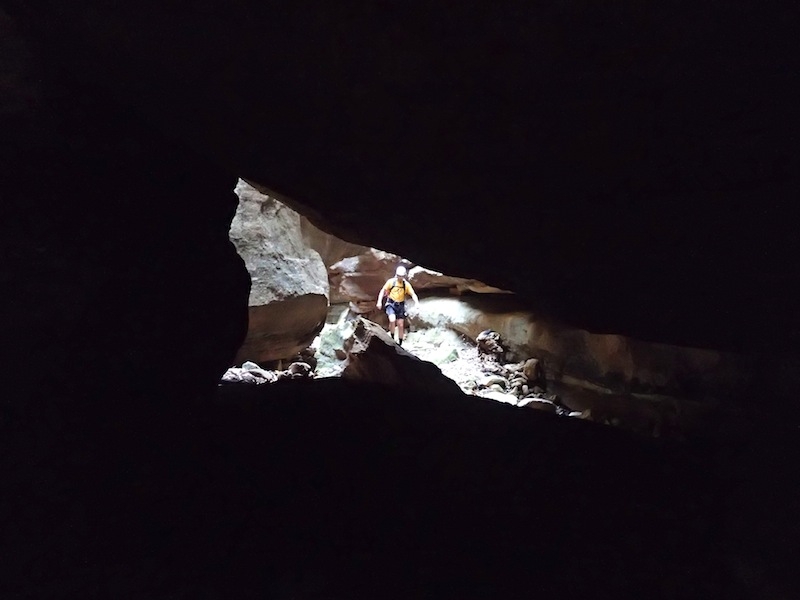 A short tunnel section in the canyon 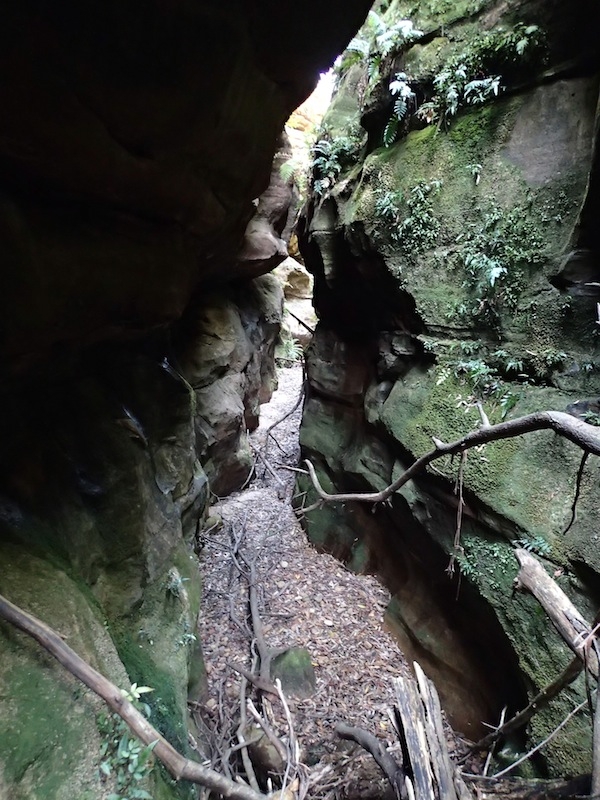 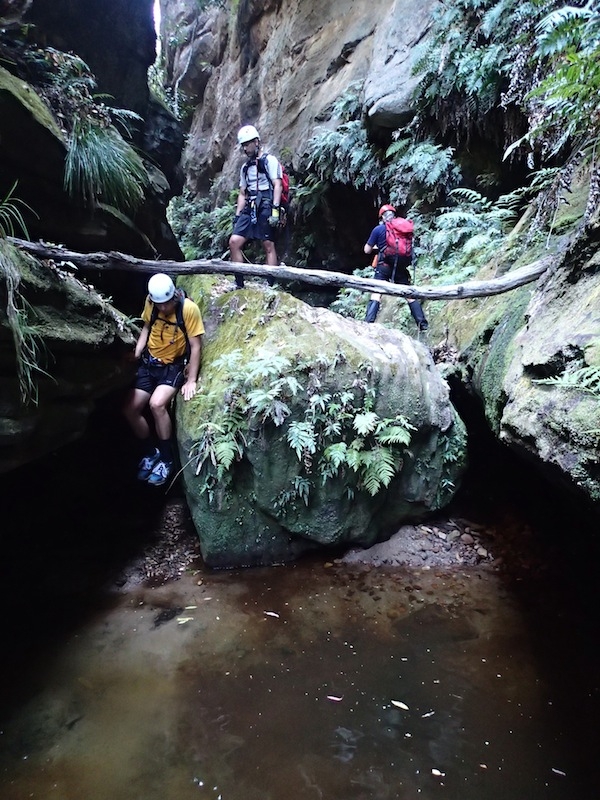 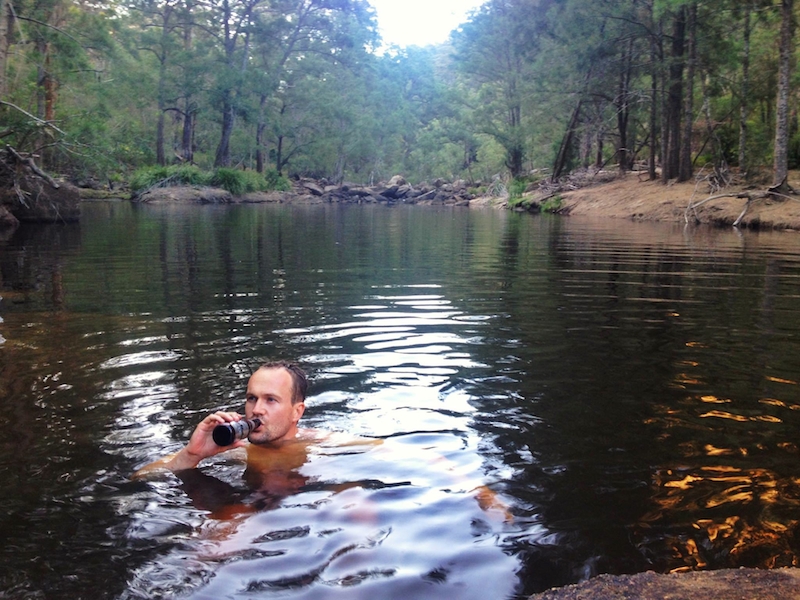 Stephen cooling off in the Capertee with a well-earned beer

By this stage, most of the original crew were completely buggered, or had work commitments or other reasons to avoid another scrub bash. Kosta and myself were considering taking a rest day, but were swayed by the option of doing a well known section of creek south of the campground. We had been told it was a “must see”… but they didn’t mention the scrub!

We navigated to a pass just south of the campground, where there was an obvious gully up the cliff-line. Most of the climb was done without rope, and we made it to the top in good time and energy. 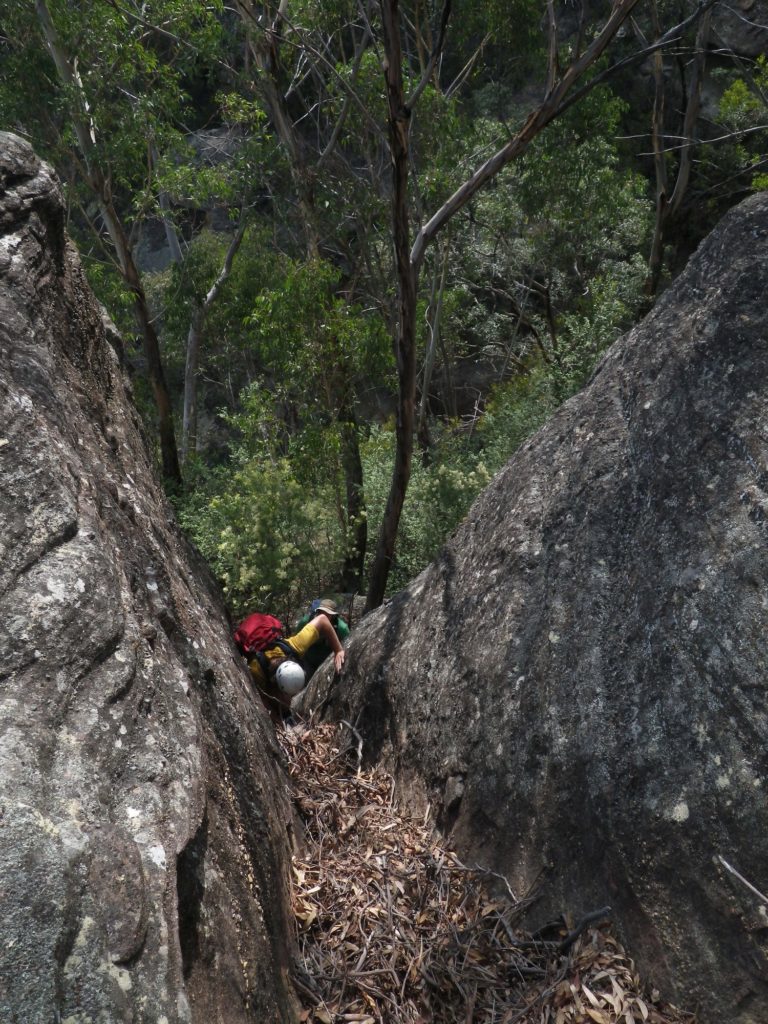 Scrambling up a pass behind our camp site

But the pass was only the first bit, and what followed was a gruelling long ridge walk through substantial scrub in some sections. We had been warned not to get sucked into an east-flowing side branch that would cause us to miss most of the canyon, and so we sidled around it, taking a ridge well wide of the creek and back around to the headwaters.

By the time we reached the canyon we were happy to have a lunchbreak in the coolness. 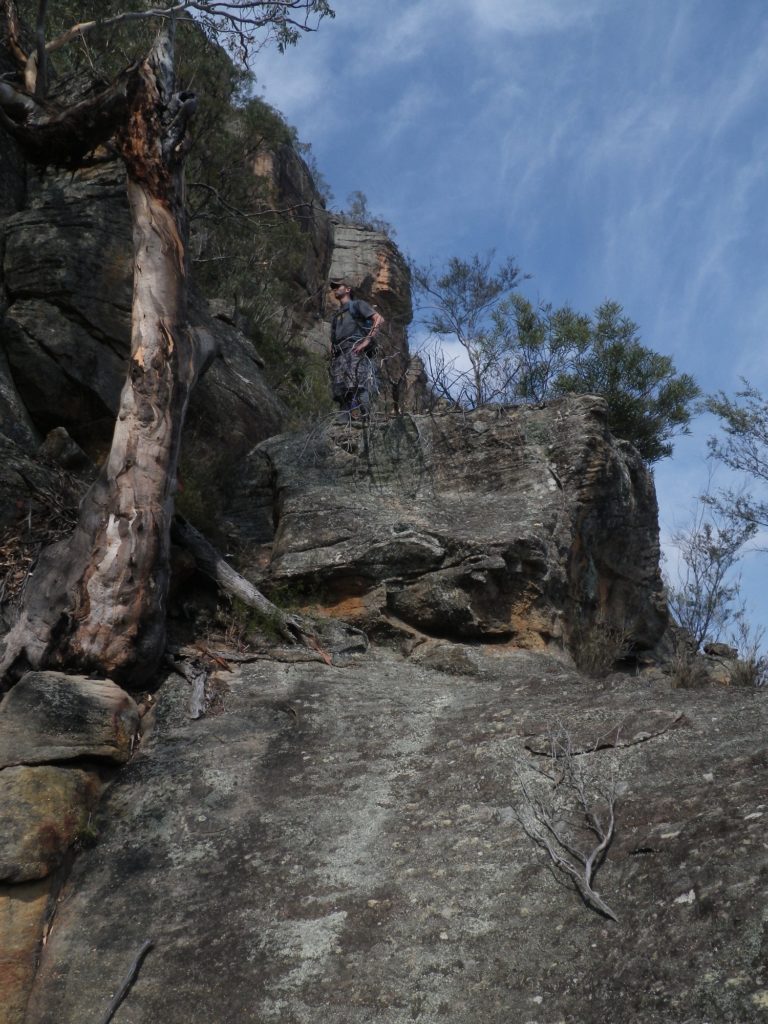 Drew higher up the climb

Thankfully, the canyon was absolutely worth all the scrub bashing! It just kept on giving. Similar to the other section that we did on the previous day, the canyon dropped slowly, and we found that there were only a couple of sections which needed rope.

There were plenty of neat climb downs and a couple water jumps. The best (and most scary move) was the one where you had to edge out onto the end of a log and pin-drop into a narrow slot section – the water here was so dark that it was tricky to tell exactly what was below.

The canyon had several swims, and we were shivering a little by the time we reached the end, but soon enough we warmed up and made it back for a beer at the campsite where we were joined by Fritz, Nicole, Oli, Chee and Cathy. 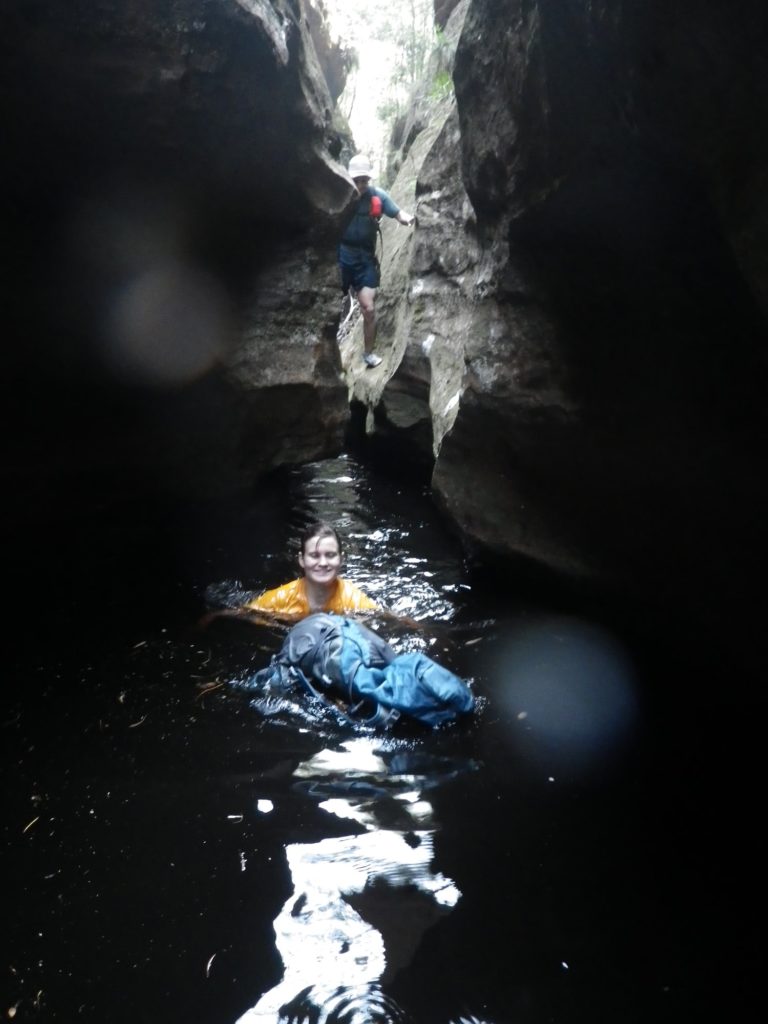 Shaz swimming in a pool high up in the canyon 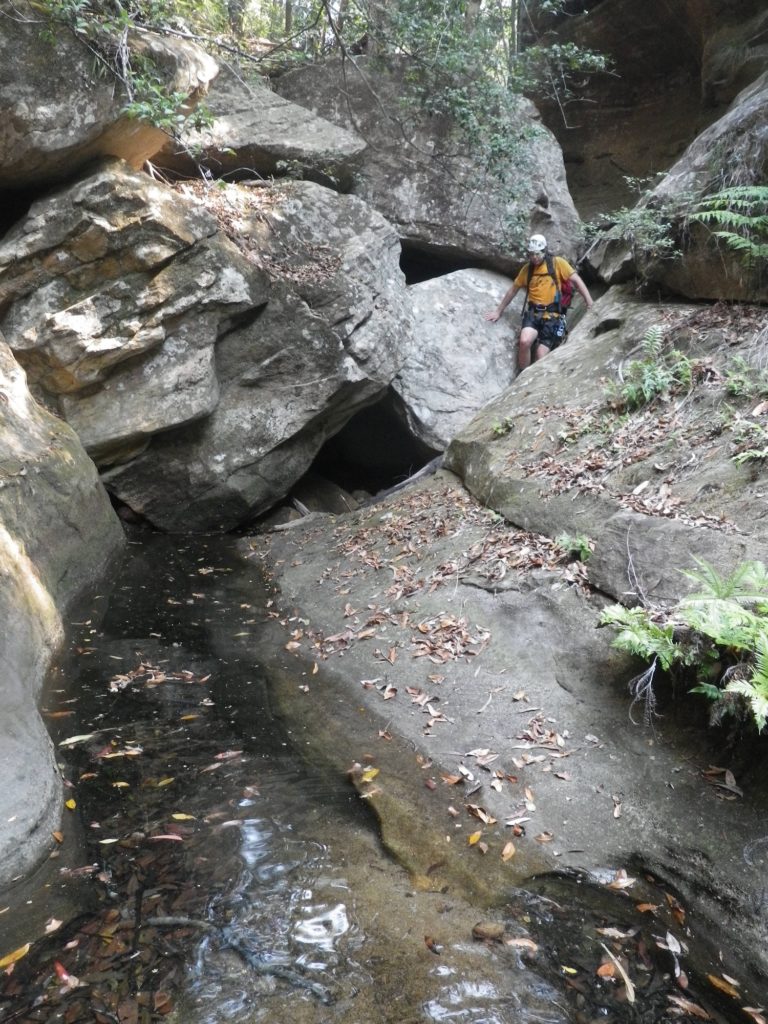 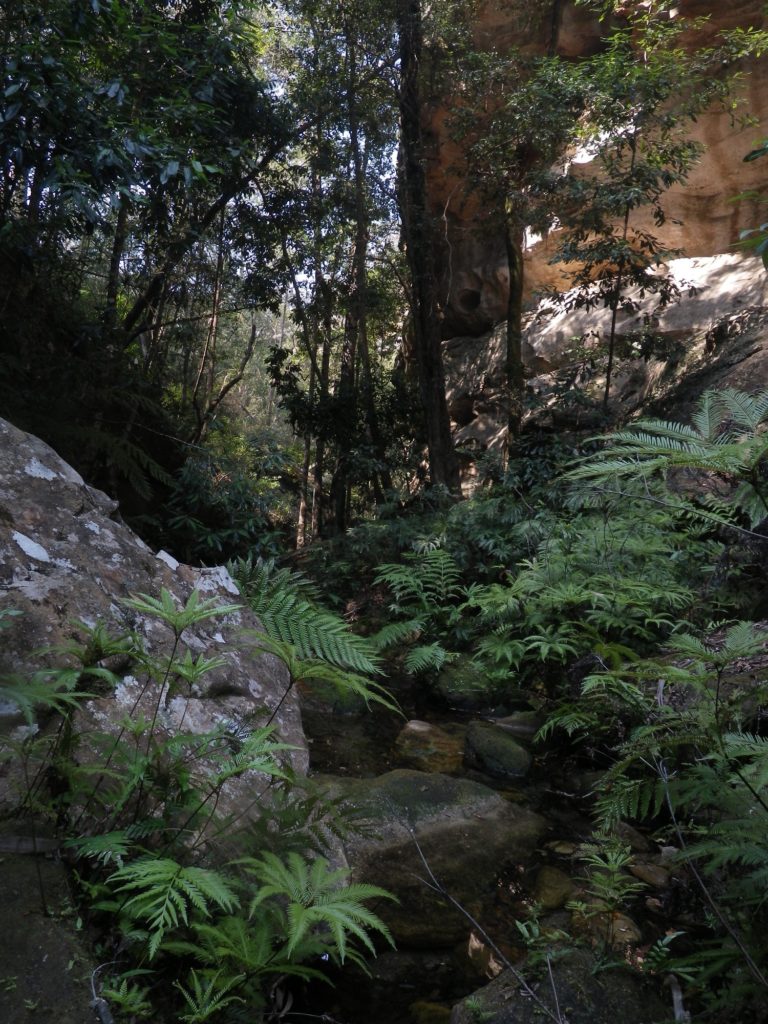 Lush greenery in the canyon 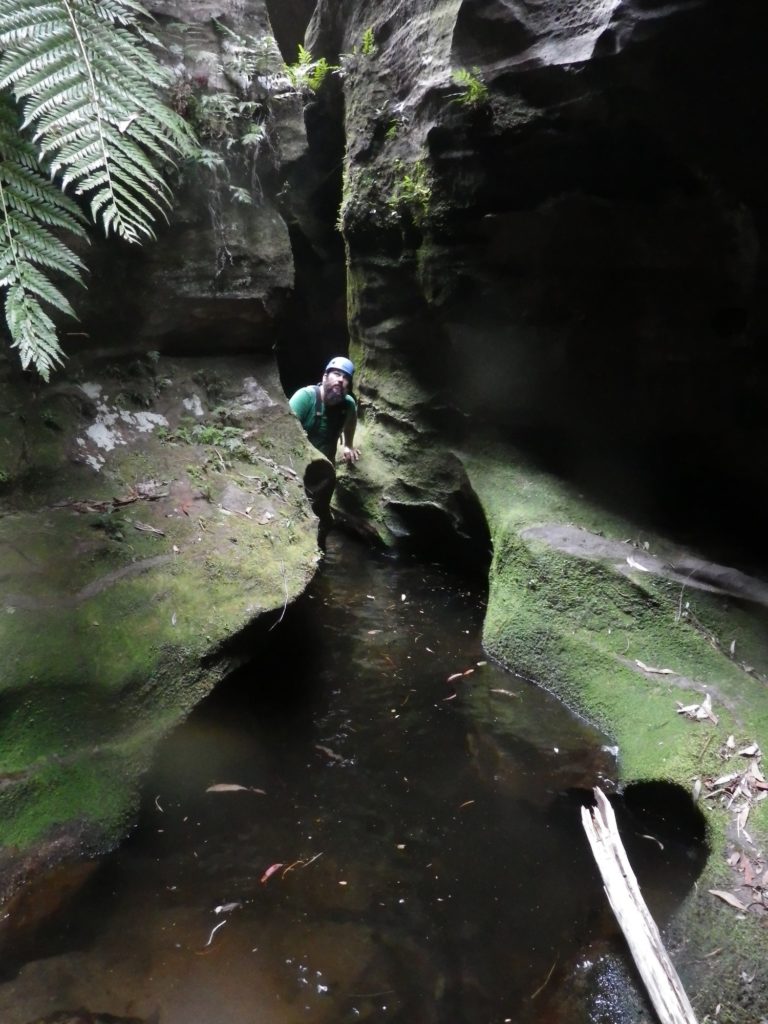 Day 4: This was a rest day for most of the group, with the large group spending most of the day swimming in the lake 500m downstream from the campground, sleeping and reading.

Mitch, Shaz and Nicole were the only ones up for a challenge, confirming that the canyon that we went down on the second day could indeed be reversed, but they still arrived back in plenty of time to join in the New Year celebrations.

There was a good amount of singing and merriment as the New Year came in!

Day 5: Pete, Linda, Bill and Beth joined us at the campground. We had a lazy start with more swimming and relaxing, before a core group of canyoning enthusiasts took to the northern slope to attempt a tall slot canyon just opposite the campground.

It is well known that there are two passes to this canyon: a climbers pass, and a bushwalkers pass. There were also extremely different opinions regarding how long the canyon ought to take us, ranging from 2 hours, through to 6 hours. 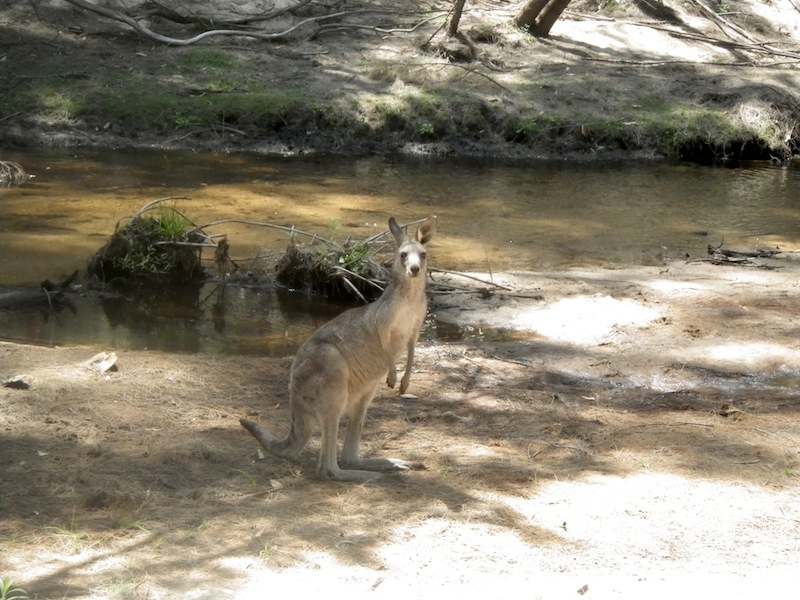 One of many kangaroos that visited us at the river

We started off full of beans up Corrongooba Creek for what was supposed to be 500m. Somehow, instead of going the easy navigation way along the creek, we got sidetracked onto a mining road and went along at a cracking pace so fast that we completely missed the pass that we were supposed to take.

For some reason we were convinced that the marked creek would be obvious, but in fact it was bone dry. Also, the cliff-line looked intimidating, and from our angle there was no obvious pass back the way we came. 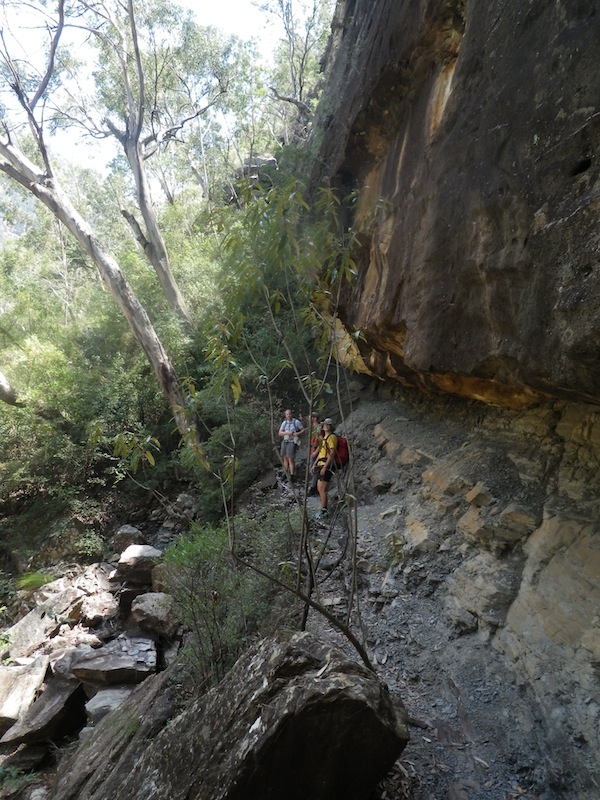 Searching for their own pass to the canyon

We found ourselves about half way up the pass and about 500 metres too far. We promptly sidled back along the cliff, and eventually made a pass through the cliff-line that joined us up with the climbers pass. This delayed us by a few hours, and it looked like we would be aiming for the 6 hour completion time.

We sidled into the canyon and had a quick snack before setting up the abseils. The canyon was remarkable – such short horizontal distance, yet huge vertical drops. Each person down an abseil cried up with woots of delight as they entered the next section.

Throughout the canyon we were greeted with calls of “more wood” and “cooee” from members of the group sitting at the campground below. 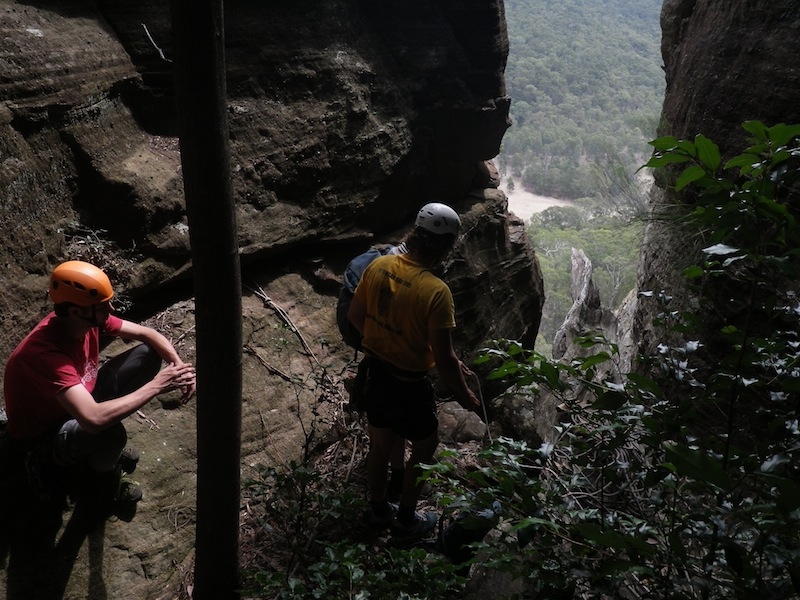 Looking down the slot to the camp site far below

The last drop had an interesting sling setup that was jammed between two rocks. It took a while to pull out the sling for inspection, but on balance it seemed okay. The abseil took us out of the canyon slot and to an overhang where you were greeted by a hornet’s nest if you didn’t do it quick enough!

One last abseil (that could have been scrambled) took us down into the creek and soon enough we were back at camp for nibbles and beer. 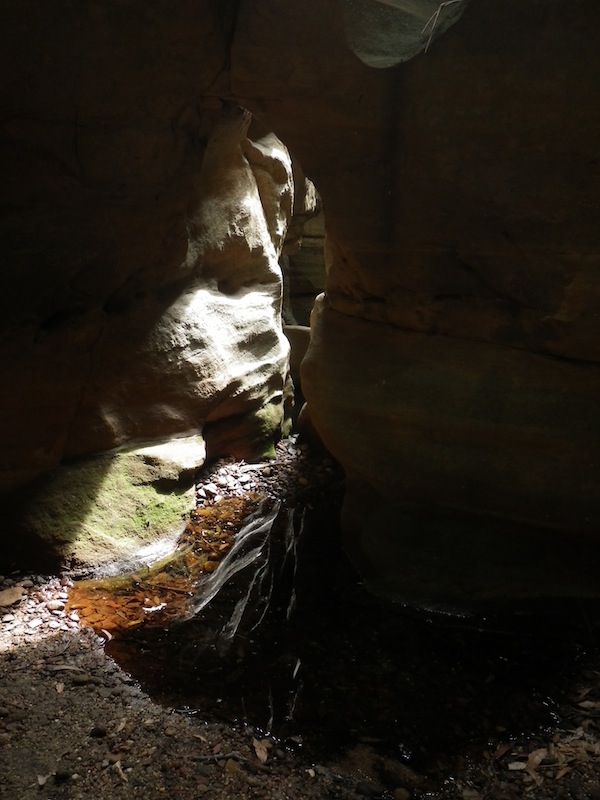 Day 6: swimming, pack-up and lunch at the Capertee Royal Hotel.

Overall a great six days out exploring some spectacular canyons in the Wollomi region. Thanks to T2 for organising it and for everyone else for making it such an enjoyable trip!