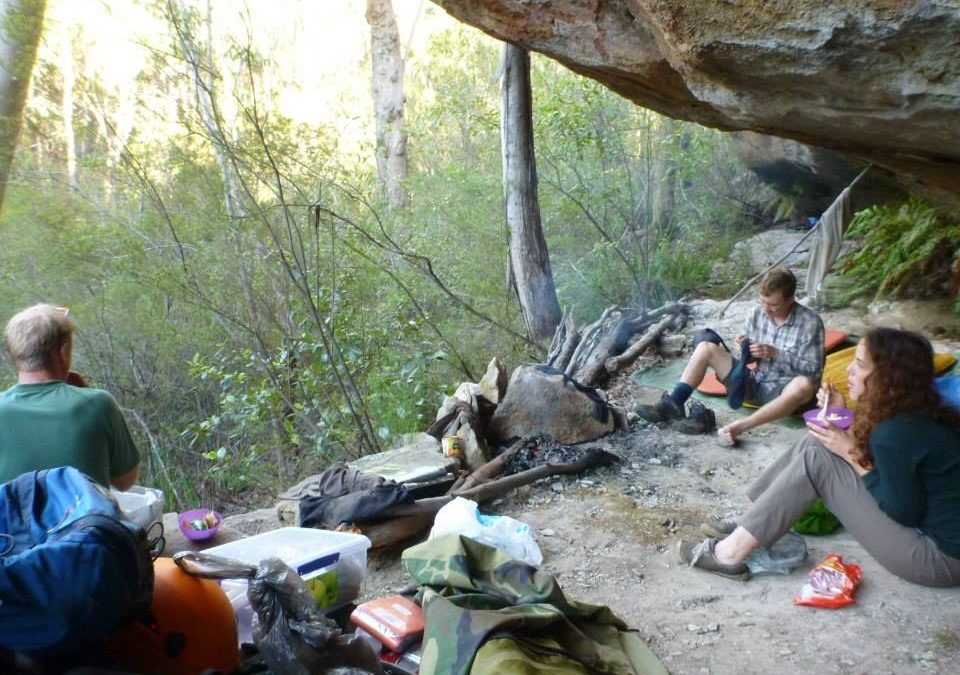 First up was navigation practice on route to picking up Sierra, Shaun, then dinner at Blackheath where a sudden hail and rain storm kept us inside for a while longer. It soon passed by and with faith restored in the Norwegian weather service we drove out to the southern Deep Pass car park and slept out (no rain here are all). All stars that night, and for every night on this trip.

With no Kristian till tomorrow, we day tripped to Banks Canyon. Great day! Deep Pass quickly led to Rail Motor Ridge where with limited vision, due to thick vegetation, navigation relied more on subtle observation of contours. Perfect for bringing our attention to where we were.

The ridge trail was at times faint but as it turned more to the north near hill 998 we kept on east, then eventually round to the south, down the scrubby untracked ridge down to a point where the vegetation cleared a little and the patchwork of mostly burnt with some unburnt bush on Waratah Ridge was visible. Other ridges on our side of the Boori were also now in sight and our playground for the next few days was gaining definition.

Then it was downhill to the west to find a way into Banks Canyon, which first up offered an entrée of horizontal canyoning with squeezes, twists and some dark pools. Then the main course appeared as an abseil that sinks into the ground, leading you on to an eventual log walk down into the Bungleboori, which is itself a clear water canyoning treat.

We started upstream, passed the exit for Hole In The Wall canyon and finally dismissed any vague thoughts that we might do that canyon as well today. Then we headed to our exit turn right creek.

Just after an awkward small climb up we could have kept going on the creek, which I knew, but instead we went up to the left to explore the rock pagodas on a rocky spine that paralleled the creek now on our right. The two eventually joined and then it was left, right, and then left again at Rail Motor Ridge to be at home sweet car park 10 hours after we started.

We found Kristian at the northern Deep Pass car park, arms folded but all smiles and we went back to the other car park. There is a great open grass camp area near Nayook Ck (the road in from the south is easy, the road from the north is definitely 4WD territory) but it was late and we didn’t want to move the cars in the morning.

Great day! With our now heavier packs we took to Deep Pass again on route to the camp cave described in track notes for Crikey Canyon.

After we passed our previous turn off point, the track came and went, resembling someone who was constantly on the verge of remembering and then not remembering the plot of a great dream. And just with that, if you relaxed (and headed back to the rounded ridge top), the track would magically reappear.

But I’d like to know who forgot to take my gaitors or remind me to wear the long trousers in my pack! As it was Shaun, Sierra and I had now consented to the lower limb Wollemi scrub tattooing process, although this was numbed somewhat by the anticipation of Crikey.

We navigated our way right to the camp cave, which turned out to be the higher and more spacious of 2 caves on the same small spur near the creek junction. Then lunch took over.

At the mysterious sound of the 1pm bell, we took to the track notes and headed to Crikey Canyon, via Mother Scrubby Crikey Hill, Flaming Scrubby Crikey Spur and You’re Frigging Kidding Me Scrubby Creek. Just when I was about to become excessively not happy (as in “I want to go home!”) the excited encouragement of two of our group signaled that the fun and wonder of Crikey canyon was just round the corner! Fantastic.

The Boori was there soon enough. We found the exit gully upstream, went to the right and then up to the ridge back to camp. The scrub eased for a while in a fire affected patch that was well and truly revegetating, before returning in full force to offer resistance as we tried to guess whether we’d get to the camp cave before sunset. We did, just, 12 hours after we left the cars that morning. We had very slightly overshot our turn and ended up walking through a kind of wetland. The water I later collected in the small flow in the creek was put alongside pure canyon water in a blind taste test. Both tasted like water.

Great day! Over breakfast our plan for Fortitude Canyon quickly changed to Nosedive Canyon. We went out to the south west, headed up to the ridge and with much less crikey than yesterday’s ridge, we began Nosedive Canyon. Another wonderful canyon.

Our only mistake with anchor points on this trip was on the very last abseil where we didn’t check the pull down. Kristian was the lucky fellow who got to prusik back up. For some time we could see K’s legs swirling in the air as he negotiated various puzzles while getting up the rope, through a chimney like section, rearranging his pack, and then back through the hole that enticed us to that abseil there in the first place. It ended well but it was an unnecessary and tiring exercise. Glad we’d been practicing prusiking at different times this year.

After resting, K reset the rope elsewhere then slid with control and grace to the mid section before completing the abseil. During all of this Shaun had taken to washing his clothes, Sierra was singing and the Boori was now resembling a hostel as we relaxed into a long lunch.

We relaxed so much that our shorter day was now becoming a long day and so we headed south to the Crikey Canyon exit point, watching for side creeks, direction changes and other markers on the map. The end of Fortitude canyon arrived along with a sandy camp site, and then we explored. I can’t remember what it looked like but I do remember having a great time!

As we headed south once more we spied what looked like the beginning of a pass. Kristian was off up the first climb then the rest of us followed in various states of “yeah, let’s try it” to “no, it won’t go anywhere”.

Well it did go anywhere, the kind of straight up and very makeable anywhere that leads through rock pagodas and short cuts the way home significantly. Pass finding is great fun. We got back to the fire scarred area and all Shaun’s magical washing was undone. We were all now blacked but got to camp with no problems, 11 hours after starting.

This could have just been the walk out day but we decided to try abseiling with full packs, as this may well be needed in more exploratory trips or even to go down a canyon on route to a creek level camp site.

So we headed to the roof of the camp cave and with 2 abseils, using trees as anchors, we went down to the creek. We filled our water bottles, then headed back along Motor Rail Ridge and invented a three abseil descent into Deep Pass. This was an unnecessary but very fun way to end the trip where we all learned a lot about the fabulous practices of canyoning, navigation and multi-course dinners.