Carrabeanga Falls is described in the canyoning guide book as being “an epic, due to its remoteness, problems of loose rocks, and the exposure of some abseils”. This always sounded like a good fun trip for me and this summer I finally got a chance to schedule it.

Due to its length, Carrabeanga is usually done as a two day trip, with the walk in and the canyon on day one before walking out the next morning after camping at the junction with Kanangra Creek — if the party doesn’t get benighted. In fact, there are numerous reports of parties getting benighted inside the canyon, with some people even claiming that hardly any party makes it to the end before dark. Challenge accepted.

We met at Mt Victoria for dinner on Saturday evening and then drove out to Kanangra. We quickly set up camp at the start of the fire trail and went to bed early so we could have a super-early start the next morning. Our alarm (aka Adrian) woke us around 5am and by 6.05 we were happily (or morning grouchily) walking and making our way to the start of the canyon.

Finally the bushland gave way and we were at the top of the cliff-line of Carrabeanga Falls: a cascade of waterfalls dropping down into a huge amphitheatre.

We eagerly started with the first few abseils and then, as we knew from our track notes, we had to cross over to the other side of the creek if we wanted to do the nicer route.

At first it seemed there wasn’t an obvious ledge to cross over so we swarmed out trying different routes. After a few minutes I found a not too bad scramble down to another ledge and across the creek. All good and as planned. Sure enough there was another anchor.

Was this a short abseil? Or already a long one? Some misunderstanding and consultation of the track notes revealed it should be a long one. So we re-rigged the abseil with two ropes and down I went. All too soon I landed at the bottom. It seems “short abseil” would have been the correct answer. The long drop was the next one. We decided to abandon the track notes and take every obstacle as it came, knowing that there were several routes through the canyon.

It was clear what was ahead of us now: the main drop, with two long pitches next to the waterfall and down to the bottom of the amphitheatre. The first drop allegedly went to a narrow, easy to miss ledge. To make it a little bit more interesting, there are plenty of ledges and lots of scrub to tangle the rope after throwing it down. 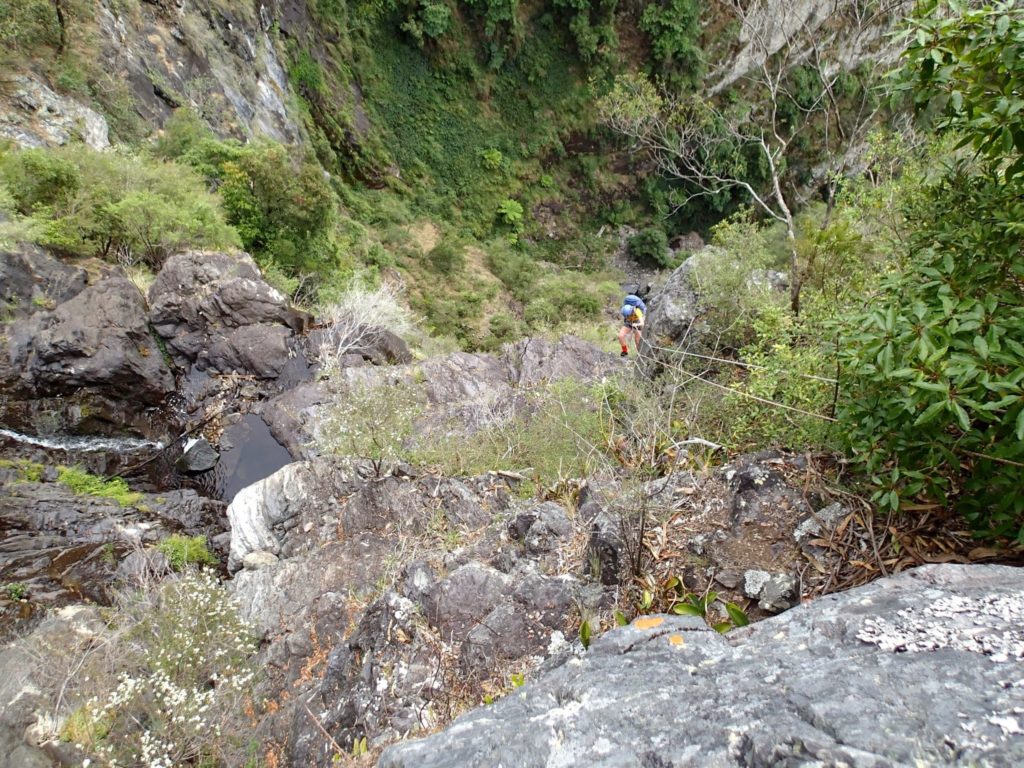 Helen going down the main drop of Carrabeanga Falls.

Eventually we all made it to the ledge and prepared the second drop — down an overhang and all the way to the bottom. The view was clearly spectacular.

The second big drop of the waterfall. Adrian is just visible standing far below at the base of the drop.

By now the sun was high up in the sky, making the already intense heat even worse as noon approached. We were all longing for a some shade and a swim, not to mention some food.

After the main drop a section with a more constricted gorge lay ahead of us. As if we had ordered it, a couple drops down was a nice shady pool — an ideal spot for lunch.

Most of us went for a dip, which was a true relief from the heat of the day and about an hour later we were all refreshed and ready to move on.

The next few abseils were all short and we were flying down the canyon until we reached a bigger abseil again. While rigging it we started wondering if this could be the final 42m  abseil already? This early in the day? It must be another glitch with our recollection of the track notes. Indeed, it wasn’t the 42m as we could see from the bottom. A short walk later the final abseil was there: a really nice descent into a pool. 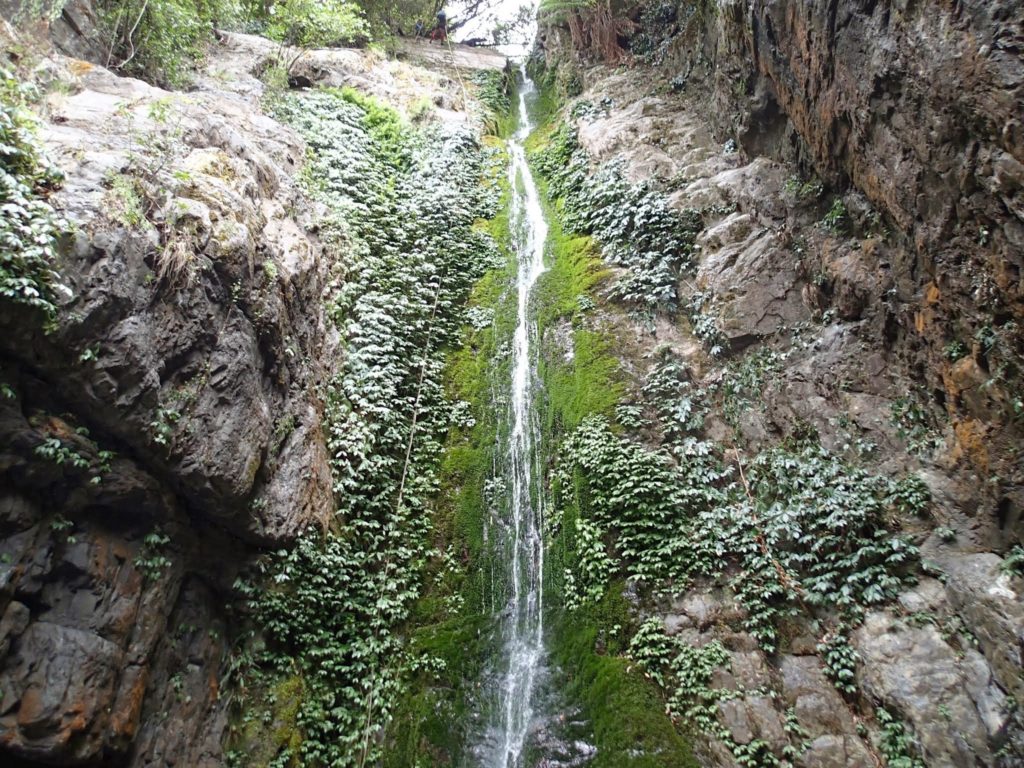 The final abseil of the canyon down a peacefull mossy waterfall.

From then on there was plenty of rock hopping down the creek (some of us might have abseiled another scramble in there) and not too long later we reached our goal: the junction with Kanangra Creek. What a pleasure. No need to say that none of us lost any time jumping into the creek for some cool refreshing delight.

To our astonishment it was merely 3.30pm. If we really wanted, we could probably still walk back to the car the same day. But that would have meant more hard work and sweat as opposed to a chilled afternoon at Kanangra Creek.

Before long the snacks and port came out of the packs and snacking seamlessly moved on to dinner and finally we went to bed — the best way ever to spend a summer afternoon.

The next morning we decided to get an early start again to stay ahead of the day’s heat. We left camp at 6.30am and headed up the lesser used exit up Gunama Steeps, which found us back at the car for elevenses.

We escaped the flies and march flies and had a good lunch at Cafe Savanna in Oberon — a true culture shock to walk into an old-school cafe after two days in the bush.

All in all it was a good trip. But from everything we heard about this canyon beforehand we did expect it to be more “epic” and the way it turned out ended up feeling quite bludgy at times.