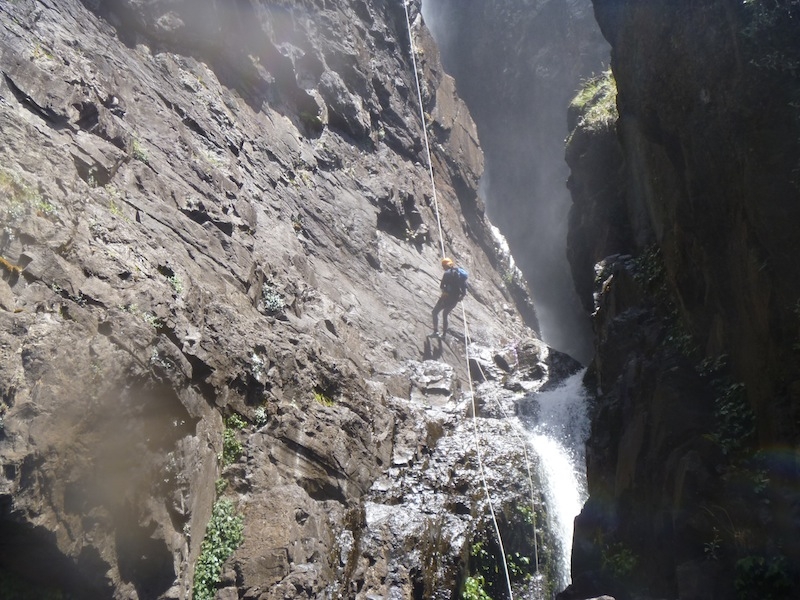 The realisation of items forgotten started early in the trip when Adrian took a call from home. Had he forgotten a small rucksack still sitting in the kitchen? Yes … but following some quick calculations it was decided it contained nothing vital. Then after the turnoff to Hampton Helen declared she had left her abseiling glove behind. The situation was quickly solved when we did a U-turn to pick up a glove that way laying in the middle of the road.

Adrian and Helen felt they owed it to the native carnivores to roll a large, freshly-dead wombat from the middle of the road. With roadkill multiplying, trip leader Kosta declared we could not afford any more stops, so we arrived at Kanangra Walls on time, and were admiring the stupendous view from the lookout at 10.30am. 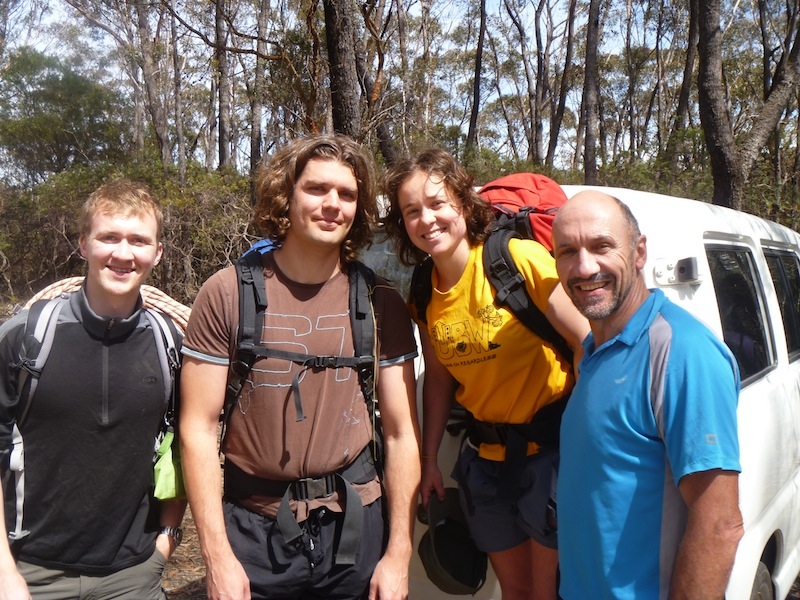 This was Kristian’s first visit to the Walls, so time was spent identifying the features in perfect weather – Kilpatrick Causeway and Cloudmaker on the right, and on the left Kanangra Creek, Thurat Spires, Danae Brook, and on to where Carrabeanga must be.

The first abseil of the ten Kalang Falls abseils, 35m from a tree on the right, was done on single rope, with a stone knot and locking carabiner isolating the other strand as a safety rope if needed, with the last person untying and abseiling double rope. This was new for Adrian, who found single rope through the hydrobot descender much jerkier than double. 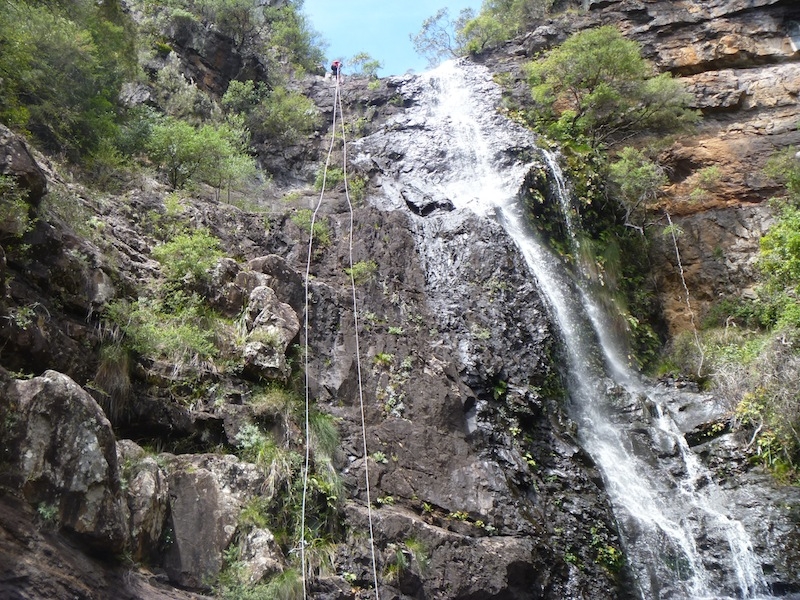 Abseil two was an impressive 40m beside Kalang Falls.

In such warm conditions, Kosta and Helen were enjoying a cool dip in the pool at the bottom of abseil seven even before Kristian had arrived.

A quick snack at the junction of Kanangra Creek, and an hour later we had ascended the ridge to arrive at the top at 4.15pm. We felt like fraudsters, experiencing little of the misery associated with Murdering Gully.

Cheese and biscuits at the lookout were interrupted by a large birthday party from Lithgow, with the women dressed in all their finery. Next along was Albert and his two children who advised they were also doing Kanangra Main the next day, but starting before us. 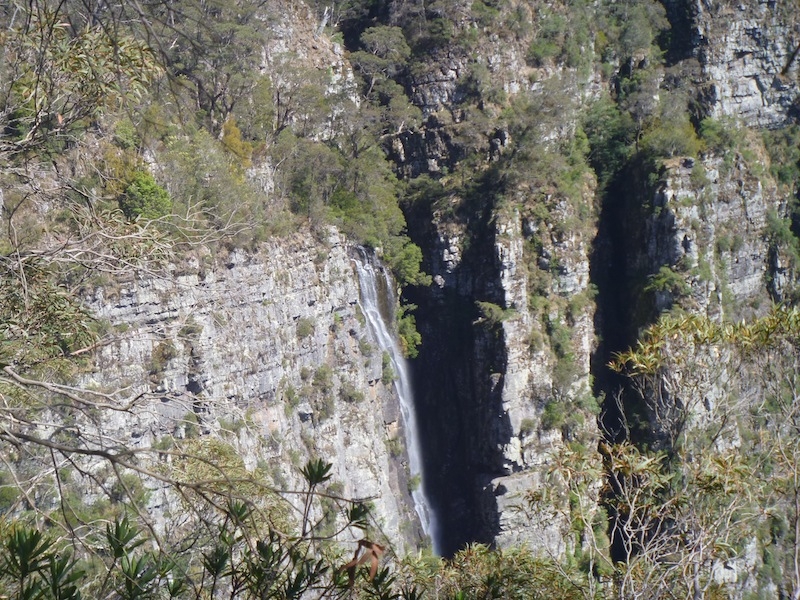 Kanangra Main Falls, with The Slot behind

A comfortable camp was made at the Uni Rover Trail, with conjecture on the large mammal jumping from tree to tree above us. The final consensus was that it was not the Kanangra Panther, but a brushtail possum, with strange colourings (white belly).

Kristian was first up Sunday morning and got the fire going. Kosta arose, and concerned by leaving behind a fire, he dismantled it in a scene reminiscent of the fire warden in “The Gods Must Be Crazy”. While he was absent doing his ablutions, Helen arose and innocently built up the fire for her cup of tea. Adrian chose to remain a silent observer. 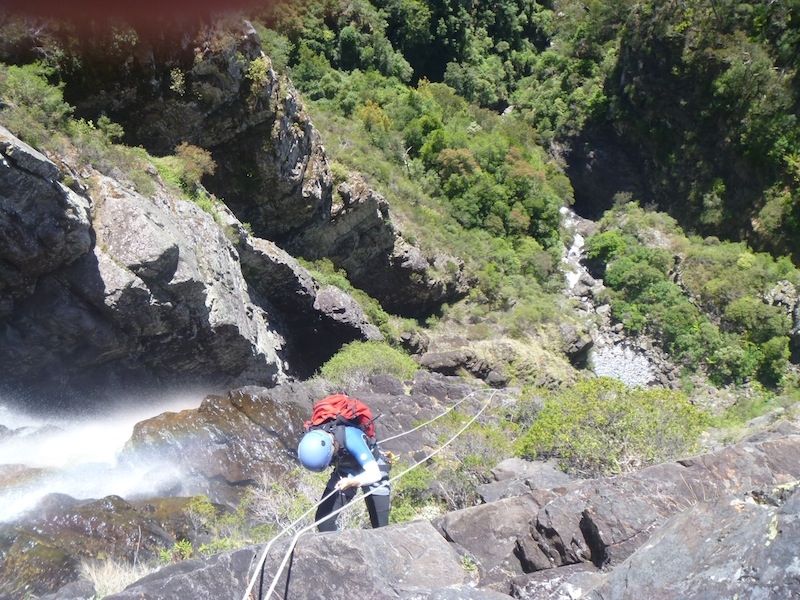 Helen on abseil one of Kanangra Main

Kristian decided to take a walk to Crafts Walls on this superb day. Kosta, Helen & Adrian waited until 9.30am for Mike to confirm his ‘no show’ before heading off to Kanangra Main.

Helen had started a book on which abseil we might catch Albert & co on, but all bets were off when we met them walking back in full wetsuits, not having found the start. There was a collective sigh of relief not to be confronted by a duty of care in the canyon. Mind you, we should have guessed, having heard Albert’s tale of taking three days to get out of Claustral Canyon…

Kosta was first over abseil one, which is 52m. Helen and Adrian discussed their mutual apprehension about this undertaking, consoling themselves as they looked at The Slot that it could be worse.

Then followed 40m and 48m abseils. Thankfully there was no harm done in the misunderstanding that led to the pull down not being tested. 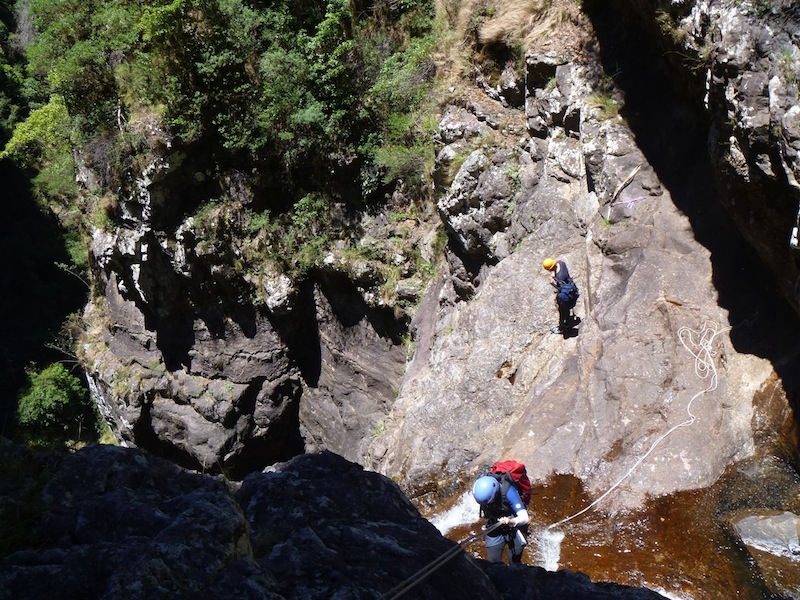 Helen on abseil eight, with Kosta at our lunch spot, below the next anchor

Adrian rigged up abseil seven off the chockstone, but Kosta chose to jump.

Lunch was a sunny ledge after abseil eight, marvelling at the falls spraying out above us. Awe inspiring. 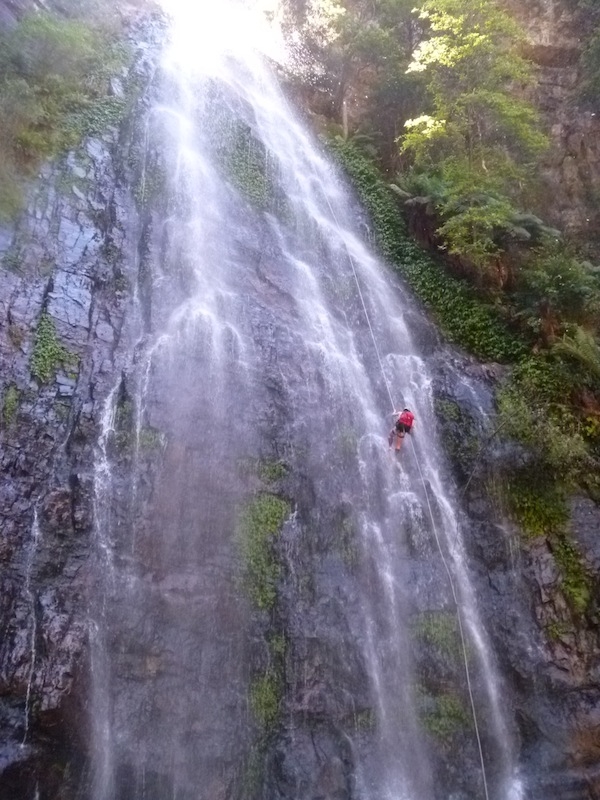 Helen on abseil 11, a slippery waterfall

Abseil 11, 45m down the slippery waterfall, was exciting in this weather. Adrian couldn’t resist adding another abseil down a small waterfall — scrambling around would have been a waste. There was another add on possible, but we needed to get a move on so passed it up.

After abseil 12 came 40 minutes of rock hopping down to our ridge of yesterday and the now familiar climb up to the car park. 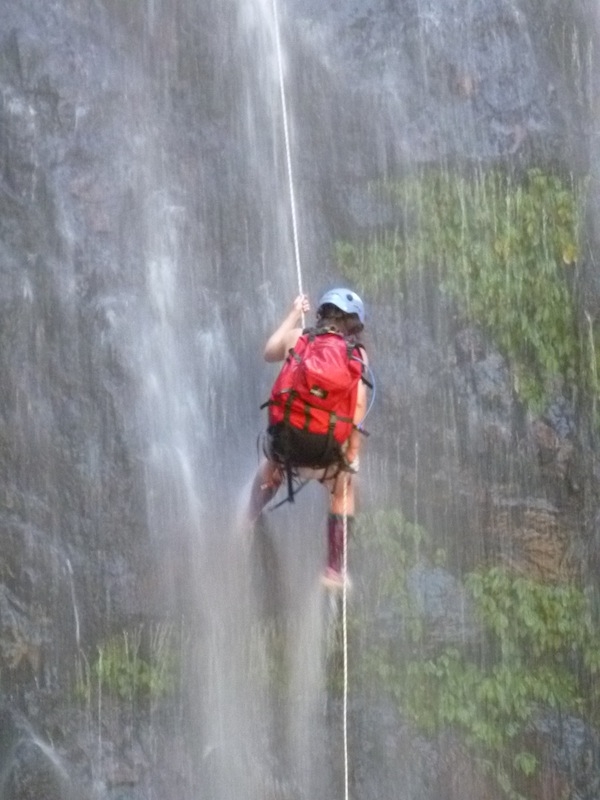 Helen on abseil 11, a slippery waterfall

The wild dog calls around the valley were more strident and frequent than the previous day, and Helen suggested maybe they had caught dinner and were summoning the pack.

Kristian was patiently waiting for us as we reached the car park at 6pm, and dinner was at the Hampton pub on the way home. 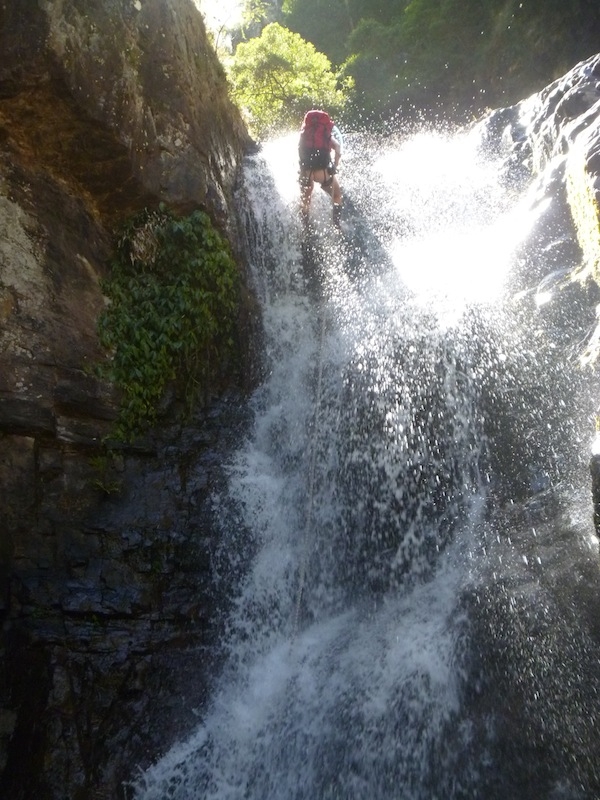 Helen on an optional abseil that can be walked around. But in this weather, why wouldn’t you?

What a wonderful weekend, having two great canyons to ourselves when we expected there to be pressure on unburnt canyons with so many closed at Mt Wilson and the Bungleboori from the recent State Mine Fire. 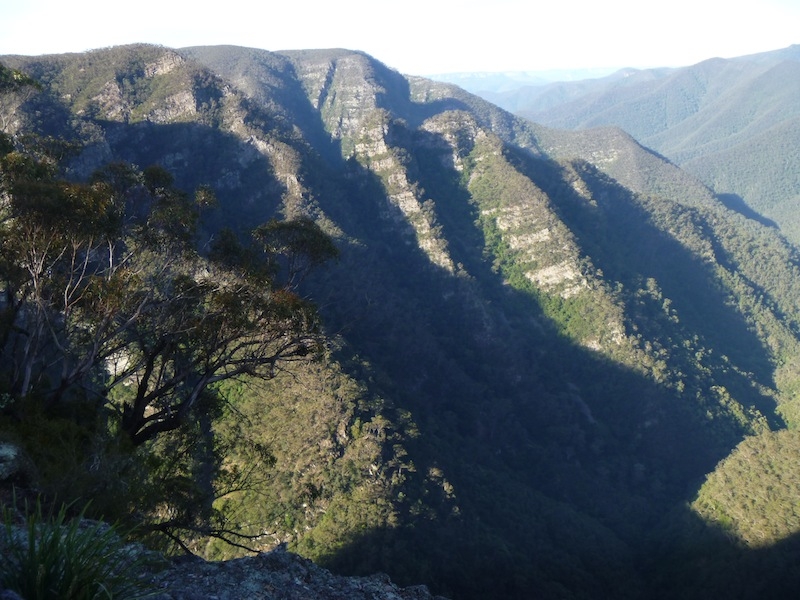 Thurat Spires in the evening light, with Kalang Falls and Kanangra Main below our lookout