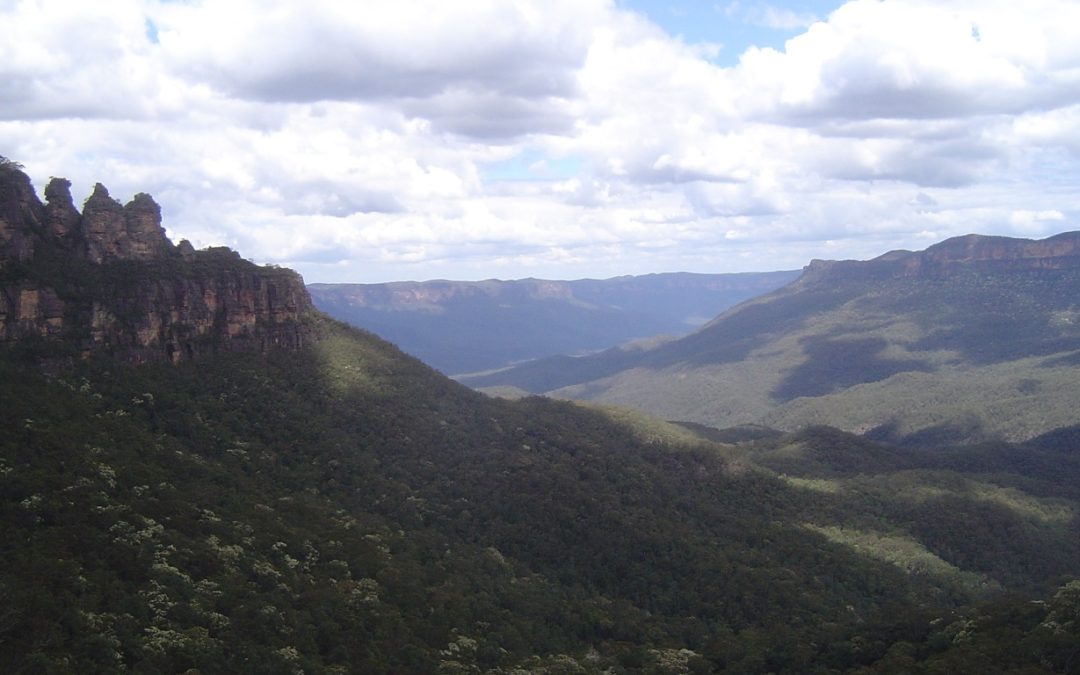 Given that the weather forecast indicated a mild day in the Blue Mountains, and thus was probably the last chance to do a non-canyon walk here before hot weather set in, I organised this walk which turned out unusually to be an all-bloke walk (usually the girls are in the majority). Three of us met up at Central Station and proceeded up the Blue Mountains Line, picking up Martin on the way and Michael met us at Leura.

It was a straightforward walk down Leura’s main street and then to Lone Pine Avenue and on to Gordon Falls lookout. On the way we detoured down to look at the Pool of Siloam but didn’t find any Yabbies. From the pool it was a steady climb up again to Gordon Falls Lookout, and from there on the path followed the cliff-top providing endless scenic view over the Jamieson Valley, Kings Tableland and Mt Solitary (see photos).

One thing which stood out was the large number of Eucalypt trees in flower in the valley, especially at the base of Mount Solitary – it gave a different look to the usual view. A detour was needed to skirt an old concrete bridge which NPWS closed due to structural problems. It was the same as seen on a similar walk several months ago, but this time with additional penalty signs attached – so some people had been ignoring the “bridge closed” sign!

After a while we started to descend down the track leading past Leura Cascades. At the top we spotted some people way down at the bottom of the falls and wondered how they got there. Well, after several steel ladders we found out for ourselves! At least now the tracks are better signposted – NPWS are using metal signs that yobbos can’t use for firewood – and we continued down the track which had now become the Federal Pass. Eventually we reached Leura Forest and its picnic area were we stopped for lunch. Noting that we still had plenty of time it was decided to continue along Federal Pass all the way to Furber’s Steps, rather than to the Giant Stairway via Dardanelles Pass. We eventually reached the base of Furber’s Steps, along the way meeting very few tourists, who don’t seem to venture far from the Scenic Railway nearby. Then it was up Furber’s Steps, which are almost as long as the Giant Stairway except that it has several level sections along the way, handy for catching one’s breath on the climb up. It also has the advantage of passing Katoomba Falls.

Eventually we reached the top and headed back to the shops at Katoomba, foregoing a visit to Echo Point, seeing that we had already seen what can be viewed from there. We stopped of at a café for drinks, thus doing our bit to help the local economy, and then on the Katoomba Station where it was only a short wait for the train back to Sydney. The only wild animals we saw were the Sawfly larvae (see photo), some kangaroos in the grounds of UWS at Werrington, and a Fruit Bat colony near Clyde Station.

It was an enjoyable walk, which would in fact be a good introductory day walk for new members next year, testing as it does their stair-climbing ability! And of course the great views.

Alas, there was one no-show!