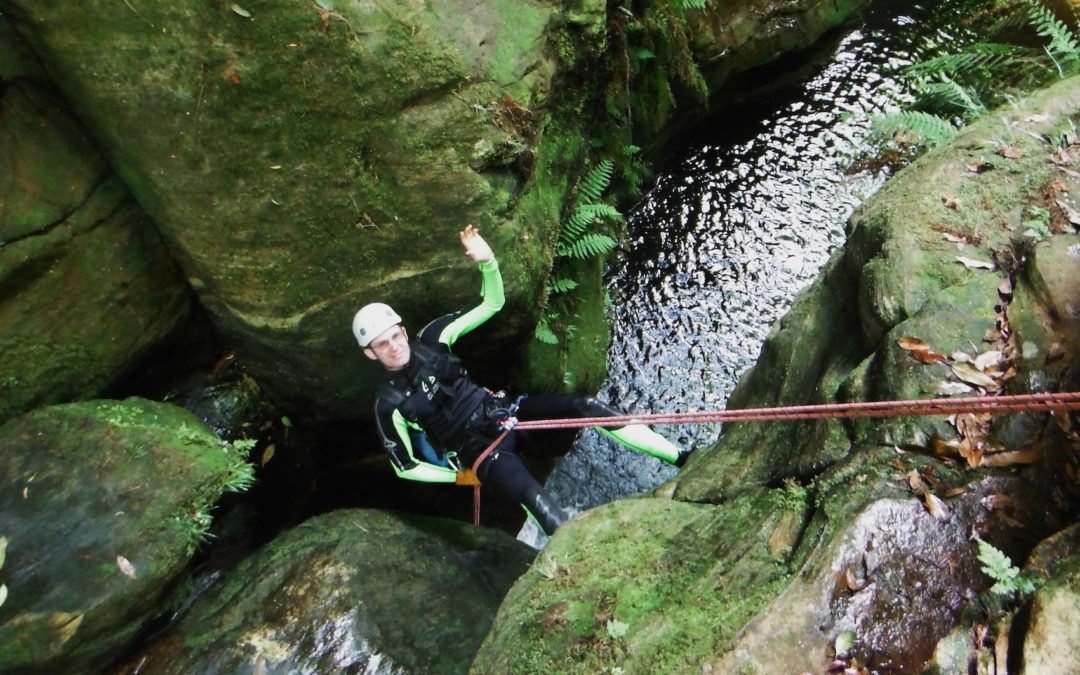 Kristian was the original leader for this trip but after abseiling together near Katoomba (fun, fun, fun) on Saturday it was clear he needed a day off to rest. So instead of staying in the mountains that night, we headed back to Sydney and I took over leading the canyoning trip the next day.

Picked up Sam early and we met Andrew at the beloved Nth Richmond shops for adventures in habitual snacks and the all important practice of transport consolidation…… we continued on in my car and chatted all things canyoning on the way.

I had made photocopies of the relevant section of the Mt Wison map and canyon track notes so I set Sam to task to read the notes and quickly learn navigation. Andrew and I have been to this canyon before. Sam was soaking up the new information, contours, hill tops, creeks, ridges, catchment areas, flash flooding, errors in track notes etc. Much to learn.

Once there we put Sam in charge of navigation and headed off, past the sign that said the area was closed due to fires – I had checked and the NPWS website specifically said that the Bowen’s Crk canyons were open! – down the fire trail checking off features described in the track notes till we got to the ant hill, then onto smaller tracks. Sam went first and later spoke of enjoying the puzzle like experience of path finding.

There was a tour group ahead of us and we eventually caught up with them where the entry creek met Bowen’s Ck Nth. They were on the hop though and stayed one abseil ahead of us. Andrew was taking photos whenever he could and sharing canyoning knowledge, Sam was just loving being in a canyon and learning about canyoning – checking anchors points, setting up the rope, checking harness fit and belay device, using safety lines at the top of exposed abseil start points etc – and I was enjoying teaching and relaxing in the wonder of this canyon. Great day!

There are 3 abseils, with Andrew going first, then Sam and me last, having the most experienced people at both the top and bottom of the abseil while the beginner was “on rope”. I had already thought that Sam would make an excellent Clark Kent in a new canyoning Superman feature film, with his striking features and plain black rimmed glasses, but he inadvertently put in a good audition when on one abseil he learned that if you stray from the natural fall line of the rope then you may actually fly, not as fast as a bullet thankfully, or over a tall waterfall, but certainly in a horizontal direction till you meet your fate at the far end of the pendulum swing. This happened, and he disappeared from my view, right to left, into the hollow near the small waterfall. However, with all his super powers in tact, Sam eventually returned to view and finished the abseil, all the wiser for the experience.

Sam and I also discussed rock scrambling technique. Beginners often end up hugging rocks and leaving themselves more vulnerable to slipping as their body (centre of gravity) is no longer directly above the feet. We experimented with this and it was easy to feel how much better your grip on the rock is when you keep your weight above your feet as much as possible.

A few chilly swims later we eventually came to the junction with Bowen’s Ck South Arm and had lunch. We then finally passed the tour group, who seemed to take their lunch time and getting out of wetsuits more seriously than we did, and headed up the steep tracks back to the car.

On the way back to I started to feel sleepy while driving and in the general interest of staying alive we stopped for a while, ate snacks and chatted till that hint of sleepiness passed by. Safely on the road again we dropped Andrew at his car and then off home.