Manly to Manly via Crater Cove 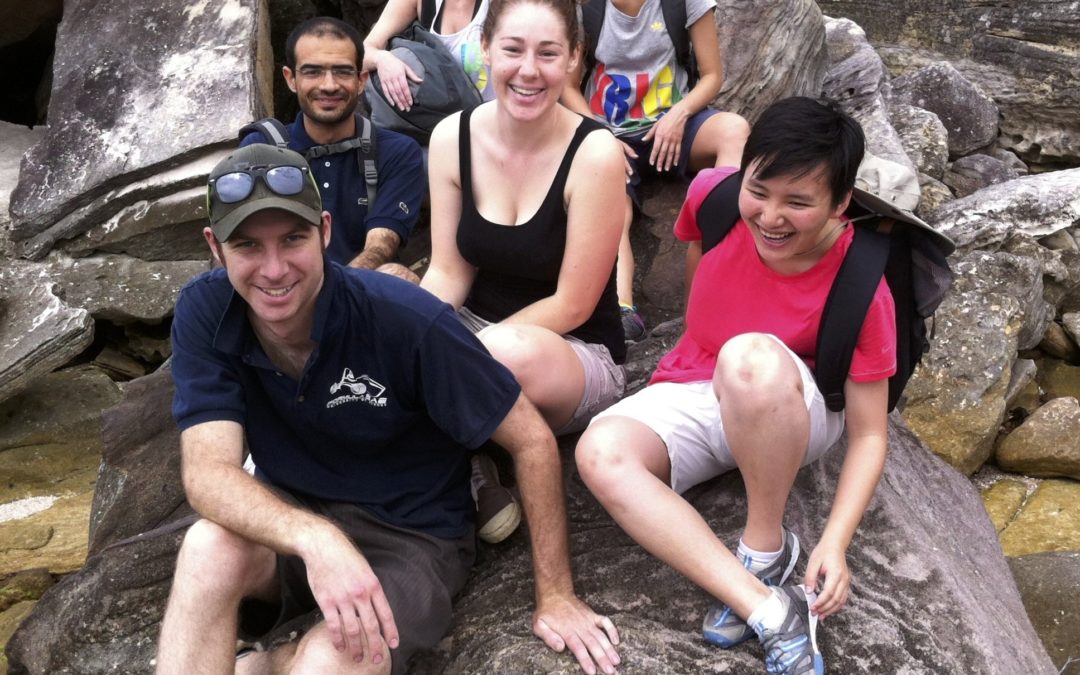 Not quite as planned this walk started and finished in the sun at Manly Wharf, with a good drenching in the middle. Most of us made it to Manly for 9.10am, one person had texted to say sorry but life has taken over, and another had to catch a later ferry. No troubles, that gave some time for a last minute ulta-stylish sun glasses purchase by Richard.

Chatting away we eventually headed off round the footpaths to North Harbour Reserve where we took to a shallow water walk to get us on our way to Reef Beach. From here we were on the rocks again, taking both high and low paths as needed. Some of the conversations were about canyoning, particularly as Sarah and Hossein were going to Fortress Canyon the next day with Sky.

Round the first corner from Reef Beach and, even with a rising mid tide, the rock shelf was plenty wide enough to check out the pools for the many and varied creatures, but no blue ring octopus. As we rounded Dobroyd Head the rock platform narrowed somewhat and there was a bit more swell rolling onto to the rocks. A quick chat about keeping one eye on the waves, then we kept going, down to the end of the rock shelf and at the base of the climb.

It’s a several metre climb and I was suddenly uncertain about getting the whole group getting up here. Beth and I climbed part way up then after some group discussion decided we would head back the way we came. Time had already drifted and some already were thinking about which ferry to catch home.

Then the rain arrived and I was glad we weren’t still trying to get up that climb. It is possible though, and I had done it a few days earlier….. So with rain jackets on we went a little more cautiously on the wet rocks and retraced our path back to Manly. The rain didn’t last that long and we ended up in sunshine once again. A little unscuccessful shopping for wetsuits, some coffee and then everyone except me were on the next ferry (2.15 or 2.45) back to Sydney. Easy day, great group, see you next time :~)