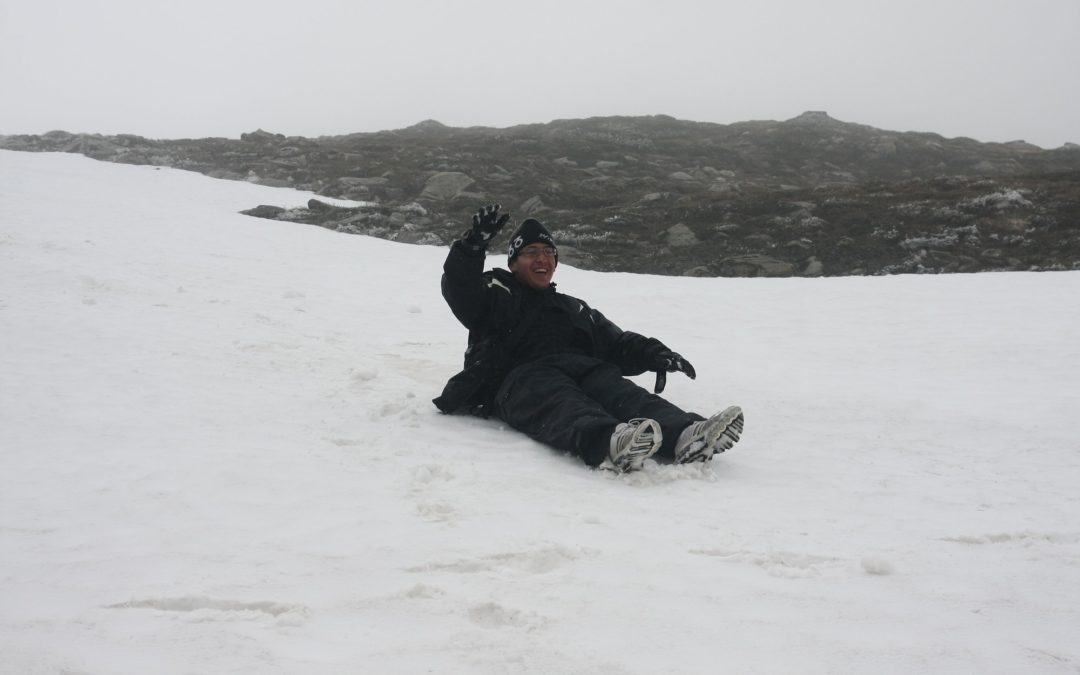 What I like about the Snowy Mountains is that just before summer you can enjoy the still extensive snow drifts and yet see the spring wildflowers at the same time. The weather is not too warm either. So I ran a trip on the weekend of Nov 9-10 with the intention of climbing Mt Anton and Twynam.

However, a big weather system moved in towards the end of the week, and I realized I may have to be a bit flexible with my plans.

Almuth, Luiz and I left on Friday night, and I had booked a motel in advance at Berriedale after the forecast look quite atrocious, storms wind and rain. Not ideal for car camping! Ironically after driving through awful weather on the way, the night was starry when we arrived around midnight. But after so much driving, a bed was a more comfy option anyway!

A blue day greeted us on Saturday and we headed up to Guthega, and began walking the Illawong trail beside the rushing Snowy River. Wildflowers, snow drifts and clouds billowing around the peaks made it a lovely hike. I was planning to base camp near Illawong lodge, and the campsites looked great. But then I saw some very tell tale cirrus clouds moving in rapidly from the west. Checking the rain radar on my phone confirmed a strong southerly coming from Victoria with some embedded storm cells. (Luiz and Almuth found out the one thing I don’t like at all are thunderstorms in high mountains! )

Although it seemed  a bit irrational at the time, I changed our plans, not to camp there and not to take an untracked route to Anton as planned. Instead we walked back, and returned to the car with packs to plan to camp elsewhere in the evening. We drove around to Charlotte Pass and climbed a small fun rocky peak with snowdrifts and great views of the Main Range. And I was glad I changed my plan, the summits of Twynam and Anton were now being covered in swirling ominous clouds. My experience with the Snowies is that it’s not not much fun walking trackless about in thick clouds with nothing to see. Also it can be quite hard to navigate especially when the terrain is not always as easy it it first appears there with hidden gullies, bogs and scrub over rock. Although I worried that I may have been overly cautious, I don’t regret my decision at all , especially with the recent case of a missing hiker in that same area.  At least with our peak we could enjoy the spectacle in a safer location.

Later after checking out Charlotte Pass, we retreated to Jindabyne for a pub meal and refreshments. A bit nicer than camp food! But afterwards, we drove back up to Island Bend and camped on a cold evening that was now trying to snow. A campfire warmed everyone up, and we enjoyed watching a brushtail possum trying to get the remains of some Baileys out of Almuth’s coffee mug. Some kangaroos also paid us a visit (and woke us sometimes at night with thumps and munching).

Sunday morning was much colder. Luiz tried to get a photo of himself with a local roo but every time we set the picture up Mrs Roo and joey would hop off and hide, only to return a few minutes later, prompting another try with the same result!  Following a suggestion from Almuth, after breakfast we went back up the mountain to walk up the 10km return trail to Blue Lake, since  the peaks nearby were well and truly socked in with clouds now. The walk was cold but lovely with misty views, snow drifts and iced plants all providing interest. The Blue Lake looked like something from New Zealand or Antarctica with its snowy shores and icy grey waters. Luiz enjoyed a few attempts at glissading on the soft snow.

It began to snow heavily on the way back.  I heard later they got more than 20cm of new snow that evening!

Although the trip didn’t quite go as planned because of the changing weather , we all left happy with what we had done. It’s proof that the mountains and weather call the shots. We could have ignored the warning signs, but I don’t regret my decisions. I have spent enough time in this area (and mountains in general) to know when they are giving you fair warning. In this case I think that respect was paid back with a most enjoyable time in the Snowies.

Thanks to Luiz and Almuth for putting up with my (sometimes erratic ) decision making, and also for getting into it and making the trip a lot of fun.