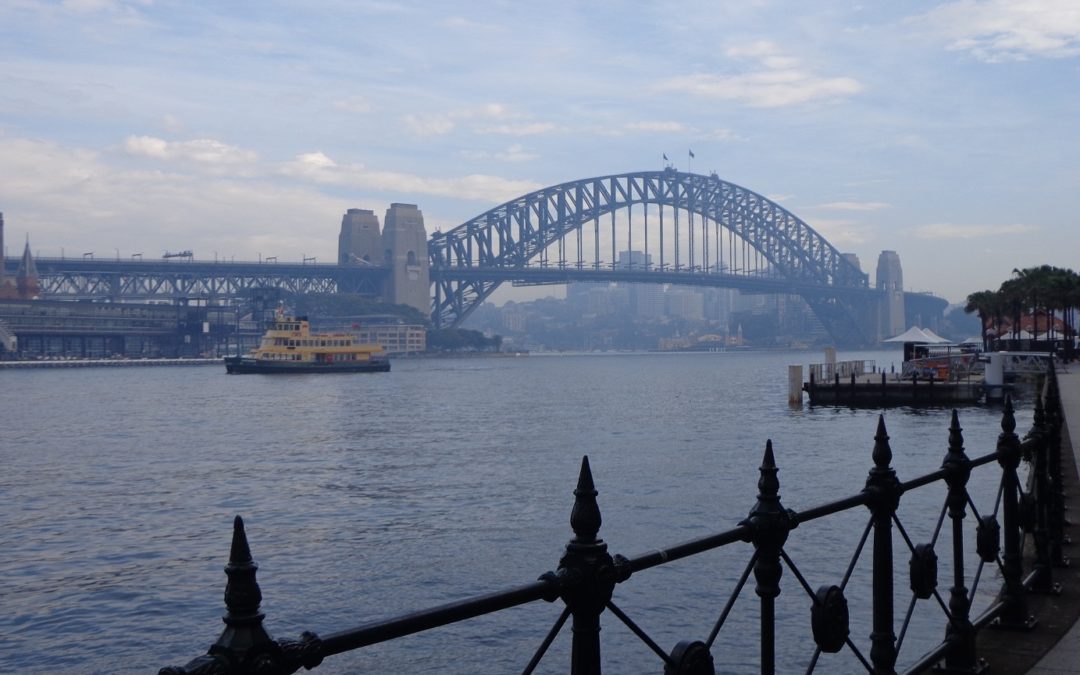 Four of us met up at Circular Quay for the 9am Ferry to Manly. We lost 3 people pulling out because of illness, Philippa couldn’t come as she was moving house. The air was fairly thick with the bushfire smoke haze, which caused one one person who is prone to Asthma to pull out. One person however simply didn’t show up.

On approach to Manly Ting and Marta spotted a Dolphin leaping in the bow-wave of the Ferry, which excited them. Keren met up with us on Manly Wharf (I was easy to spot with a white SUBW T-shirt), and we set off on the walk past Fairlight Pool and on past Forty Baskets Beach. Although on the Ferry we had a nice sea breeze, once on land the breeze turned rather warm. Curiously it remained overcast until well after lunch. This meant we were not walking in the direct sun on this rather hot day. As the tide was up (but receding), we had to do some rock-hopping south of Forty Baskets Beach to reach the tracks passing through Dobroyd Head. It was here we also saw the first of the many Dragons we saw on this walk.

The good thing about doing this walk “back to front” (it’s normally done in the other direction), is that side tracks that are hard to see in the other direction become easier to spot. One of these is the track going to Crater Cove with its collection of Depression-era shacks, which are now preserved by NPWS and volunteers. The entrance track starts off as a deep worn track which after about 100m or so becomes rather rough, but still fairly easy to trace. On arrival there the only inhabitants we saw were several Dragons. After looking round we retraced our steps back to the main track, and on the way I reminded people to keep an eye out for snakes.

Sure enough, just as we started to resume the walk along the main track, we spotted a small Brown Snake on the track. In fact I had actually stepped over it before noticing it! Ting got closer to it to get her photo, unaware that it is the World’s second most venomous land snake. Once advised, she quickly stepped back. Goes to show that even in Manly you have to look out for snakes!

After that, we continued along the track which passes through thick scrub without any large trees (see photo), which on a hot afternoon can be very stifling but in the morning is not too bad.
We eventually reached little Castle Rock Beach shortly before noon, and had lunch. Only Pieter went for a swim here, as the water is still cold and the sky still overcast (and in fact seeming to get darker). Pieter gave it a go as, he said, it was as good as it gets in his native Netherlands. After lunch we continued along the track to Clontarf, seeing more Dragons along the way, and from Clontarf to Spit Bridge along a track which partially follows the old Many tramline – hence it is paved with railway ballast.

We crossed Sit Bridge and then passed next to the boatsheds to go around the Northern sewer pump house and vent which is cleverly disguised as an Ancient Egyptian monument (there is a similar one on the Clontarf side). Well, sort of disguised. From there it was some rock-hopping along the foreshore from The Spit to Chinamans Beach, which at low tide offers an alternative to a road-bash. The tide was not fully out yet so some sandy stretches were still covered with water. Just as we had almost completed this section, we had a water break and photo stop, and – disaster! My camera fell out of its covering and straight into a pool of sea water! From then on it refused to work (although the memory card was OK). So on from Chinamans Beach for a road bash to Balmoral Beach, where we took a break for a swim and a rest. By this time the sun had come out, and the smoke haze had also gone. Then it was along the track through Laurie Plunkett reserve which follows the former Balmoral Tramline (and is not a part of the Sydney Harbour Walk). Then another road bash (shaded this time) to to take a short cut through the Middle Head Army barracks to Middle Head lookout. he we saw a Kookaburra in a Lilli Pilli tree which chattered to us (the Kookaburra, not the tree). When we tried to locate the track going to Chowder Bay however, we came across a sign stating “track closed, do not enter”, but with no directions as to find a detour. Faced with a very long detour via Georges Head, we considered ignoring the sign and pressing on regardless. But then I spotted a young lone walker with a map and with that as an aid we found a way round the closed track (it turned out the the lone walker was a girl from Munich, Germany, heading for Balmoral).

The alternate route eventually got us to Chowder Bay, and it was noticed how, between there and Middle Head, the track is not well signposted at all.

By this time a Southerly Change had come bringing welcome cool air. We reached Bradley’s Head with it’s relic mast of HMAS Sydney 1. Then on to Taronga Wharf for the 5.02pm Ferry. Meanwhile the Southerly had whipped up waves on the Harbour which sent them breaking over the Ferry Wharf. We eventually arrived back at Circular Quay were we went our own ways.

This was an enjoyable walk, with some unusual sights such as a Dolphin and a Brown Snake. And the final Dragon count? – 28.