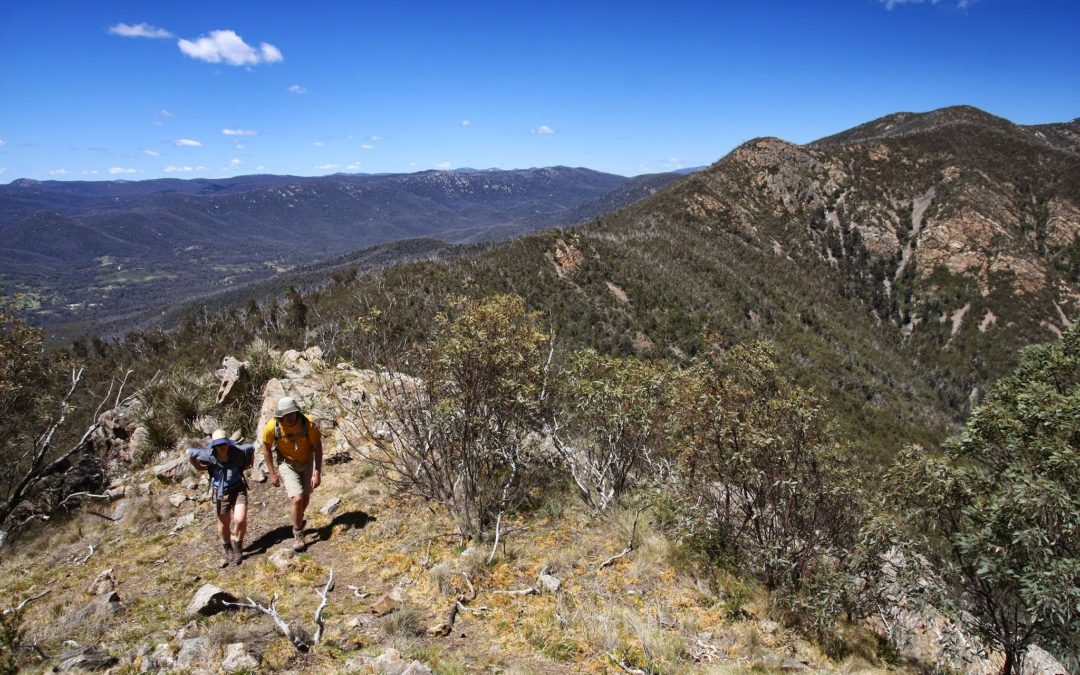 Canberra and the ACT may not be the first place you think of when you think of good hiking and climbing opportunities, but the ACT has some great mountain ranges just behind Canberra, and has become a place I keep returning to for some very nice mountain walks.

On Friday night of 25th October our party of 4 (Kosta, Carina, Almuth and myself) made the drive down to the nation’s capitol, and around midnight arrived at our campsite. I had planned to camp at Woods Reserve on Corin Dam Road, but road closures due to recent landslides meant that some creative thinking had to be done to find a site. Luckily we found a place in the nearby forest big enough for 3 tents. It was a chilly single digit night, dropping to 1C.

A blue sky morning heralded a perfect day for hill climbing and so we set off for nearby Tidbinbilla Nature Reserve. By 9.30 we started on the long fire trail up to Camels Hump (I guess they do too! ) . The forest is regenerating after the fires from some years ago which has made for some very thick regrowth. As our trip included scrub bashing I wasn’t looking forward to meeting all this vegetation head on!

By 11am we were at Camels Hump (we note the sign read Camel Back maybe due to previous creative vandalism?) which had some very fun rock scrambles as we tackled the very steep and rocky peak. Its not a big climb but lots of fun. From the summit we could see the route we needed to take to 1440m high Johns Peak (somehow I keep calling it St Johns Peak, but he ain’t no saint), and then on to the higher Tidbinbilla Peak. It didn’t look to easy, as the ridge undulated along with a rough and rocky character. However once on it, we found a sort of faint foot pad. It was scrub bashing, but I have had much worse! Even so, we still averaged only about 1km an hour.

The climb up Johns Peak was great , with some fun (sometimes loose) rocks to clamber up to gain the summit. There were quite a few wildflowers about and the views were stunning.

After a short break, we set off for 1561m high Tidbinbilla Peak. The way was a bit harder, with a vague route but as long as we followed the ridge line, all was pretty straightforward. By about 1.30pm we were enjoying the panorama from the top of the peak. Views went all the way down to the Scabby Range (I’m planning trips there in the future for sure) and 1900m Bimberi Peak in the south, Canberra to the east, the northern Brindabella’s and a curiously named peak called The Pimple to the west. A great place for lunch.

As I placed a rock on the summit cairn I disturbed a small black snake, one of two we saw that afternoon. Everyone seemed to agree that the mountain was a great place to be. We had thought of following a route that included nearby Tidbinbilla Mountain, but then the return would have been down 500m of the possibly thick regrowth (also late in the day) to the car park. Deciding to stay on the safe side, a vote was taken to return via our ridge. We did a small short cut back to the firetrail though. At days end we drove back to Queanbeyan where a much deserved beer and pub grub rounded off a very enjoyable trip.

We hoofed it back to Sydney that night, most opting not to spend another chilly night in the tents!

Thanks to Carina, Almuth and Kosta for their stimulating and totally enjoyable company. It was great to share a trip with a group that seemed so well aligned, and the trip was everything a good bushwalking adventure should be!

From our high vantage points, we could see lots of other places that looked worth exploring, so I can guarantee that I’ll be back there for more very soon!