Umina to Pearl Beach and Patonga 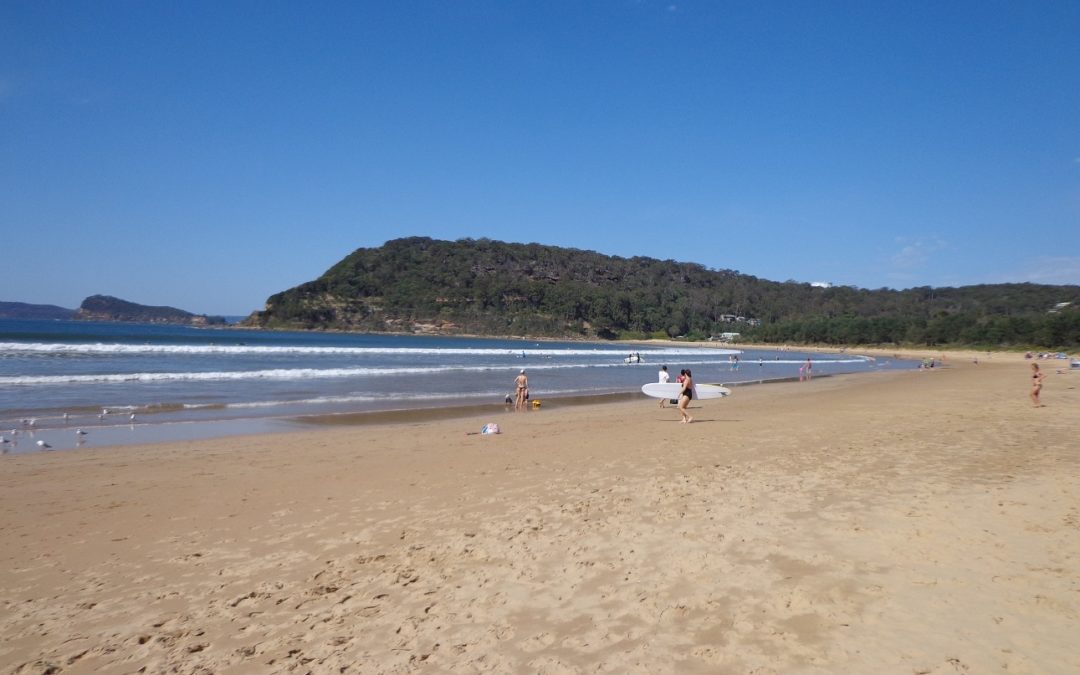 The forecast of 34 degrees and a total fire ban on the sunday of the walk led to a check of the status of Brisbane Waters NP, and a preparation of a “fall-back” alternative walk. As it turned out, the park remained open; also most of the walk was under trees with shade, I decided it was OK to stick to the original plan. With two people missing the train due to the replacement trackwork buses running late, seven of us met up at Woy Woy Station to drive the 10 minute trip to Umina Beach. Then the word came back from Katya and Connor (who were already at the beach) to advise that, even as early as 9.30am, there was no parking left at either the Beach’s South End, nor near the Umina Surf Club. So we found an alternative spot opposite the Umina Bowling club.

So we set off from there, walking along the southern portion of Umina (Ocean) Beach and reached the rock shelf which provides a route almost around the head land to Pearl Beach. Walking along the beach we endured the very warm North-East wind, but on reaching the point directly under the headland we suddenly had a deliciously cool sea breeze; it was like walking into an air-conditioned room. So we had a water break there, and then climbed up the rocks when the rock shelf ended, to get up to a path under the headland, which in fact was the first road to Pearl Beach from Woy Woy until rock falls made it unsafe (!). Even today Gosford Council prefers people not to walk it. We reached the northern end of Pearl Beach and walked its length, deciding it was too early for a swim, and then made a short road bash to the Crommelin Native Arboretum. This contains a circuit bush track through a collection of native trees, some very large and impressive, and a palm grove. Halfway along we encountered a sigh saying “University of Sydney, no access” (to the next door property). Still we decided that as SUBW Katya and myself could at least pose beside it! After completing the circuit we had another water break (we had several on this hot walk) and a Currawong, not content with the dead lizard in its mouth, came up to beg food. It snatched a chocolate-coated raisin from Janice, which started a discussion whether chocolate can poison birds (my experience with chooks is that birds know instinctively what foods can be harmful to them).

After the Crommelin water break, we started up the Pearl Beach – Patonga Fire Trail which gradually climbs up through open forest and provided sufficient shade from the heat. We reached the junction with the Great North Walk (GNW) and did a slight detour to the Warrah Lookout. After that we followed the GNW as it gradually at first, and then rather steeply, descends to Patonga, the last section through more palms. On the way a Brush Turkey was spotted by Siva. We were lucky enough to find a little sheltered and shady cove where we settled down to lunch. Here Siva found that although he was still carrying a litre of water, it was all in his back and not in his “camel-back” water container. Apparently one of the connections had come loose. So it was a trip to a nearby house and the residents kindly refilled his container. At Patonga we saw a couple of Water Turkeys roaring around the bay on their jet-skis. After lunch we returned via the GNW and the Fire Trail back to the Crommelin where we had another water break and were greeted by a male Turkey. He thought it was hot too as he was panting and hanging out his wings. Then it was off to Pearl Beach for a well deserved swim, as well as coffee and milkshakes. Despite the hot day the water was still cold.

Finally it was back to Umina Beach via the rocky foreshore, but this time the tide was up, which required additional rock-hopping at a higher level. Eventually we reached the cars after crossing Umina Beach; not far from the cars we saw a flock of Corellas (see photo). Then it was back to Woy Woy Station in good time for the 4.23pm train back to Sydney (and Siva’s train north to Waratah).

Despite the heat it turned out to be a good day out (being a beach walk helped of course). And there were again no “no-shows”!.

Photos: http://www.flickr.com/photos/brstafford/sets/72157636540116184/
The last photo of the possum with its baby was not on the trip, but appeared on my balcony tonight; I couldn’t resist including it.