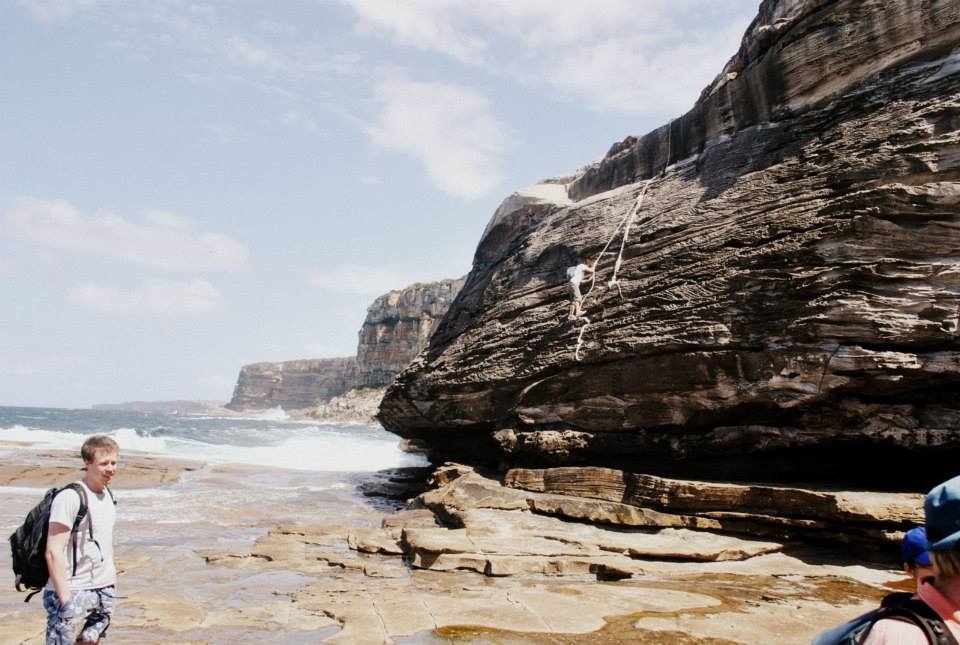 Two people couldn’t make it at short notice and two more missed the 8.40am ferry. It was a relaxed morning so the rest of the group waited and we got to know each other. When Aye and Ben 1 finally arrived it was 10.00am. We headed off up the hill in two cars, courtesy of Tim and Ben 2, stopping at the Visitor Centre car park (off Bluefish Drive). This offers free all day parking and allows you to do a circular walk. You can also park further round in an open car park – follow Bluefish Pt signs.

With the wind blowing from the SE, I decided we would start at the North Head lookouts/ladders end of the walk so we could walk with the wind at out back. It was a 20 min walk from the cars, past the panoramic view of the harbour, to the first of the lookouts, which showed us where we would be walking – there was now a buzz in the group. The swell was small enough to make the walk easily manageable.

Continuing on past the next lookout, we jumped the fence, had a little pep talk about the need for extra care on the ladders, then moved to the top ladder. It was quite windy and I found this oddly reassuring, as if the wind would hold me up. But others said it added to the fear factor. But we were soon down and on our way north around the rock shelf.

We walked and talked, climbed and scrambled, discovered that Deb had been channeling Spider Pig (from The Simpsons) and then Mountain Snake (as she wriggled through some narrow cracks in the rocks), then found a lunch spot in the shade at about 12.30pm. Soon enough we started again, rounded the corner and down a rope assisted climb to the large shelf with a sizeable rock pool. Deb was asking about swimming but to me it felt chilly with the wind blowing.

For some time we cautiously watched the waves come and go over the path we would take at the edge of the rock shelf (swell was about 1m, tide was still quite high at about 1m – low tide is certainly easier), and then decided to walk a little further away from the edge, through the rock pool in up to knee deep water. This was easy – shoes were left on as there are a lot of sea urchins and other sharp delights in the rock pool – and if a bigger wave had arrived, and sometimes they do, then shoes are for safety.

This is a great stretch of coast, the cliffs are high, vertical and eroded. Just round the next corner was the Bluefish Pt climb out, which we completed without drama. Someone spotted two whales, quite close to the rocks and so we spent time oohing and ahhing about the splendour of these enormous creatures. At this time of year, the whales are headed south to Antarctic waters.

Decision time – head up the hill to the cars or continue on Shelley Beach via the rocks…… everyone was keen to keep going, so we did. As we were reaching the corner, Deb was talking swimming again and was pretty soon down to her swimmers and shoes (to be able to climb out easily) and in she went. Tim followed, while the rest of us walked on to meet them on the other side of the corner.

Deb and Tim did climb out quite easily, and then they were in again along with Gerardo and Ben 1. After a few mid air photos and generally enjoying that we were now out of the wind, we carried on the last 30 mins back to Shelley Beach. All done.

Great day, easy group. There was a lot of enthusiasm for going on more walks and some canyoning. No doubt another beginners canyoning weekend would fill quickly! After our group photo, Deb headed off for another swim and the rest of us headed up the bush track back to the cars.